Regular readers and members of The Shell Case forum will know that I’ve been promising this review for a couple of weeks now and, finally, it has arrived. More to the point, the parcel arrived. On Saturday. For those not in the know, Amera produce plastic moulded scenery ranging from river beds, to trench networks, to ruined buildings to roads. And all for a staggeringly reasonable price.

When I saw that Amera had produced islands for Uncharted Seas & Dystopian Wars I simply had to get in touch to see for myself if £13 for four islands was too good to be true. And do you know what? It isn’t. They’re excellent.

The first thing that struck me after I’d ripped and gnawed my way through the layers of parcel tape and bubble wrap is how touch these pieces of scenery are. I remember vacuum forming from school and it was shit. I mean really shit. Flimsy brightly coloured plastic with no detail retention and prone to splitting. Not Amera’s stuff. Oh no. It’s tough like plasti-card and has a level of detail that’s more than adequate for scenery but not so detailed you’re going to spend hours and hours painting it. Plus as much of the scenery is single cast pieces and as tough as I mentioned, it’s not going to break. I dropped one of hills twice on my slate kitchen floor. It bounced and that was it. Sure I lost a bit of sand but that’s physics for you. Had that hill been resin it would have (cost twice as much and) shattered into a hundred million billion pieces. And then I would have cried. 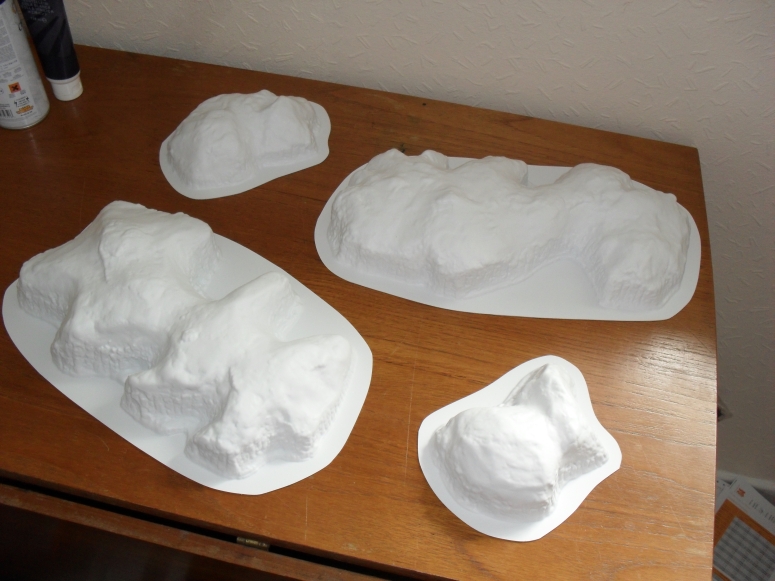 It’s durability means that you feel confident not only painting it but using it. If I were to buy a building or a bridge I wouldn’t balk at the thought of putting my lovely metal Vanguard Veterans on them for fear the plastic would give way. In fact, based on what I’ve seen, I think the only time you’d have to worry about breaking the scenery is if you decided to deploy a 40k scale Reaver Titan on it.

With regard to preparation it doesn’t need any cleaning although word to the wise, because this stuff is thick, whatever you do, don’t take a pair of scissors to it when you’re trying to trim the edges. It won’t work and you’ll make a mess. A sharp craft knife, time and patience is what’s called for. But, to be honest, that was more me being a fussy bastard than actually needing to trim the plastic.

I must say, at this point, that I’ve not painted anything in a while. For months most likely. These islands excited me. They were nice looking, not too intimidating and didn’t require an exhausting amount of building like all the other scenery I’ve bought over the last year or so. Now, I actually gave the islands a deliberately slap-dash undercoating for two reasons.
1. I wanted to see how the plastic took acrylic paint without undercoat to help.
2. I was running out of undercoat and I still had the rest of my Sorylians to spray…
The truth is the moulds take paint exceptionally well and, because it’s plastic, it’s very fast drying. These bad-boys were touch dry and ready to go in half an hour.

Once the terrain has a bit of slap you start to realise how much detail there is. Not in a ‘holy shit is that a swarm of fiddler crabs nestled at the base of the cliff face’ kind of way but more the contours of each of the islands. They’re not just mounds that you’ll cover in static grass and forget. They have great shape and topography. This said, and in the interests of being objective, the islands need sand and flock/grass if you want to paint them as something other than a bleak, grey desolate, rock. That’s not to say you shouldn’t but I wanted these islands to feel like they’d have flocks of birds living on them and nothing else so they needed to look a tad on the wind-swept side. 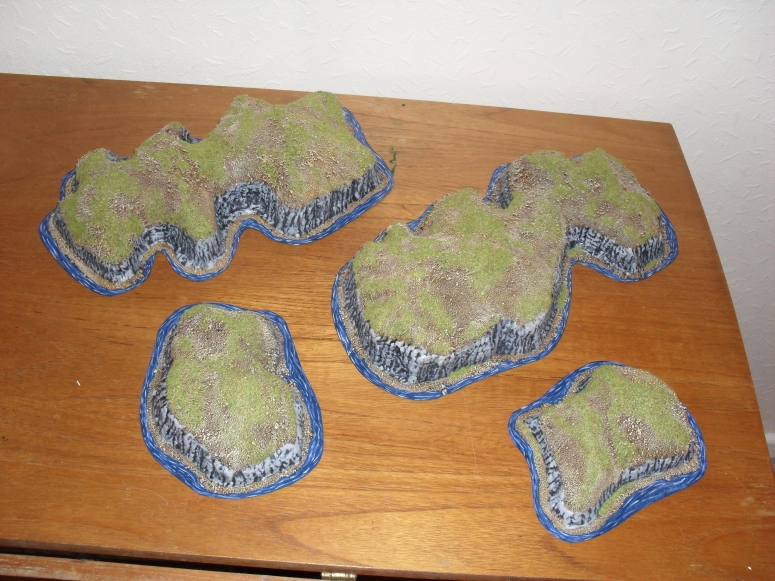 Seeing as I have to wrap this up with some kind of conclusion I’ll say this – Amera scenery is excellent. It offers an affordable but attractive & durable solution to terrain other than buying expensive resin or multipart plastic kits, both of which require a degree of prepping and building. There are arguments for the high level of detail from those kits and they have their place, but having painted all three I know what I prefer as, at the end of the day, scenery is there to help make the game a challenge and lend something to the narrative, not to steal the show. It’s your toys you want your friends ogling over after all and I got this set cut, undercoated, sanded and painted in a about 4 hours, which isn’t bad at all. I don’t think I can recommend Amera highly enough based on what I’ve experienced with the islands but also what they’ve already produced on their website. They done the impossible; they’ve made an element of the wargaming hobby cheap. And that makes them mighty.