Studio McVey, as in Mike McVey, as in one of the founding members of ‘Eavy Metal, is currently working on a cracking  game called Sedition Wars. In its at the beta stage at the moment so you can expect the finished article to be rich and visually beautiful. For now the beta rules can be downloaded for free from the Sedition Wars forum.

Sedition Wars, in a nutshell, is about a conflict between the Vanguard and the rebel slaves and clones called the firebrand. Throw in techno-phage exforms called the Strain and you’ve got yourself a barn dance.

Before I get on to the game proper I have to talk about the models. Aside from being beautifully sculpted, dynamic and wonderfully styled, I’ve never in all my 22 years of gaming come across metal models that didn’t have mould lines. I have no idea how they managed it but Studio McVey seem to have casting down to perfection.

Below is the images from the Sedition Wars website of the samples I received. I know I promised I’d put up the images of my own paint job but I was too excited about the game to wait. I’ll put mine up in a separate post once I’ve finished them. 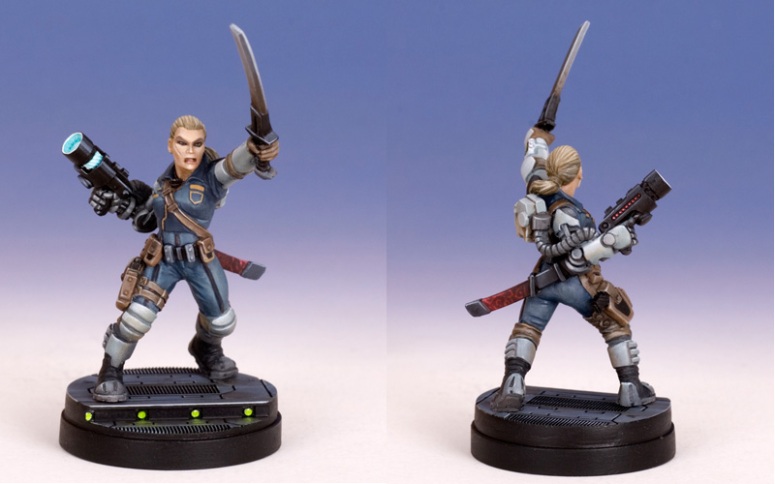 I especially love the corpsmen above. With a different paint job he’d make a cracking Bounty Hunter and he’d have to be called The Doctor.

The game is, essentially, a board game, the factions fighting over maps a kin to Space Hulk. And like Space Hulk the movement and shooting mechanic uses squares. Unlike Space Hulk, Sedition Wars uses, rather sensibly uses three different range bands which presents a variety of tactical choices, especially as the Strain – the force used in play testing – has a variety of grizzly weapons that do their thing at short-range. Sedition Works hard for you to take the fight to one another rather than the Space Hulk method of one side running head long into the others incoming fire.

The various troops/strain have skills available to them at the cost of tactics points which can do useful things like heal troops or hack networks…or just cause general untold misery to their foes. And as certain skills are only available to certain members of the team it does force you to keep the victory conditions in mind because if key members of the team get slotted then it’s game over.

Sedition Wars is excellent for two very simple reasons. The first being that the game mechanic is so straight forward. The turns flow smoothly. Combat is quick to get to grips with and works incredibly well considering both myself and my opponent were coming to it cold. It’s also assisted along by the Sedition Wars forcing you to complete each model’s actions in full before moving on to the next . It gives the game a very cinematic feel. Combine this with brilliantly balanced forces and spawning rules for the Strain and you feel like the Vanguard are constantly under pressure. Even with the relatively high strength of weapons the Vanguard have you only ever feel like you’re buying breathing space.

At one point in our play testing, 2 Phase 1 exoforms flanked my team (thanks to a nasty little move the Strain can do with nanos) and tore my trooper to bits. Not only was I forced to react but losing 1 member of a 5 man team forced me into an all or nothing assault. It paid off but only 3 of the team lived to tell the tale.

Although at an early stage, Sedition Wars is already shaping up to be a really good game. The rules are refreshingly simple to get to grips with meaning you spend more time breaking stuff to look tough than rulebook flicking. The weapons are varied and fun – try the grenade launcher and you’ll see what I mean – the factions are diverse and interesting. And the models and map are awesome.

With such strong models and accessible game mechanics, Sedition Wars deserves success, although I’d also be really intrigued to see how many maps will be included in the game and how they’ll be produced. And whether or not Studio McVey will go down the box set route at all.
I’d love to see maps done as tiles to allow for a degree of customisation and additional rules for writing your own Sedition Wars campaign. Whatever the finished article will be like, I can safely say I’m really looking forward to the full release of Sedition Wars.