Last week, in a fit of boredom one lunchtime, I wandered into my local Game store and ended up chatting to a very pleasant chap and, as it turns out, fellow wargamer. During the conversation, amongst discussing the pros and cons of Space Marine and the utterly bullshit price of the collectors edition I was pointed towards Rage. For those that haven’t heard of it before it’s created by the same people who did Fall Out 3. 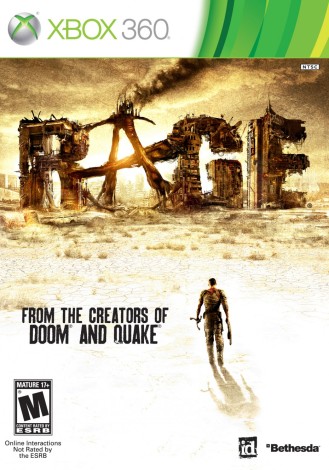 Now the way the chap described the game to was like Fall Out 3 but without all the grind. This appealed to me immensely as, if you haven’t guessed by now, I value story even above the shiniest of graphics and although Fall Out 3 was impressive it felt too open and too fragmented. A more RPG focussed FPS seemed like a cracking good idea. But I was wrong.

An hour in, apart from getting motion sickness from the utterly ridiculous amount of camera bob (that you can’t switch off) and the camera flicking about like an epileptic at a rave every time I tried to reverse a vehicle, it possessed the very worst thing about RPGs. Which I call ‘Go here, do that, then come tell me about it’ syndrome. Or GHDTTCTMAI Syndrome for short.

GHDTTCTMAI Syndrome was excusable way back when in novels, book based RPG games written by the forefathers or the genre, who didn’t know any better, or in text-based fantasy games but not in the 21st Century. It’s the height of laziness and utterly destroys any engagement I might have had with the game.

Now I actually persevered with Rage for (as long as I could before the urge to vomit got too much) a solid 6-8 hours in the hope that a plot would present itself and the endless monotony of GHDTTCTMAI Syndrome to end. It just didn’t happen. Instead I had to go explore ever further from the various towns to take part in longer, increasingly less fun missions. To be clear, I don’t think that Rage, at its core is a bad game. It has an interesting enough plot – albeit the setting has been done to death. Bleak post apocalyptic worlds are all well and good but there’s only so much grime and misery the soul can take before you start to question why the fuck you’re bothering. But mutants, urinals as water fountains and bionics on every third person (no really) aside, it was interesting enough that I wanted to play it. And the opening sequence is way cool.

So what went wrong? I think the biggest problem is that it was written by people who don’t actually understand what RPGs should be. The story is everything. Yes, fine, go to a village/planet/space station/dogging site (delete as appropriate) and get a quest but where most developers, and even games masters for the old-fashioned RPGs, go wrong is that they don’t up the stakes. Or at least they do after you’ve completed your mission and gone back to the Mayor/Governor/Captain/Pimp (delete as appropriate) and told them about it over a cup of tea and some friendly experience roles.

Why on Earth don’t they keep the story going? Mass Effect is a good example of how it’s done right. Yes there is an element of grind as resources need to be gathered and that’s a little tedious at times, but at least its integral to the plot. And yes there are side missions but it actually benefits you and every mission you complete impacts on the story and the games that follow it. But all the way through, at its heart was the, wait for it, storyline. Thus allowing you to happily immerse yourself in the struggle of humanity versus the reapers whilst, at the same time, trying to nail whoever will let you.

I must reiterate, I’m not saying Mass Effect 1 or 2 are perfect games, and they do have side missions but the key differences are 1. They actually matter to the story. You can live without them just as well but there’s actual benefit to doing them beyond the game just not letting you progress until you’ve done them. 2. Any GHDTTCTMAI Syndrome that exists is nicely hidden beneath the veneer of getting to know your team better which in turn earns you rewards in other ways. Which is a big fat zero gravity moon step away from Rage’s: ‘Go here, shoot these poor mindless irradiated bastards, steal all their shit, then come back give me said stolen shit and in return for you risking your life I’ll give you a piss poor cut of the profits.’ AND THEN NOT MOVE THE FUCKING STORY ON BEYOND ‘I’M BORED OF YOU NOW GO AND PESTER SOMEONE ELSE’!

My point, before my trigger finger starts to itch, is this:

Whenever we, as video gamers, role players, wargamers, whatever, pick up a new game or start a new campaign, we should always ask ourselves ‘where is this adventure going to take us?’ We are extremely blessed to live in a remarkably innovative age with creativity all around us. There is no room for lazy writing or GHDTTCTMAI Syndrome because we deserve to be a part of a story worthy of songs and saga. Our hobbies allow us to be heroes in history, heroes in a thousand different conflicts on a thousand different worlds. And being forced to tell the shop keeper about it before he’ll flog you the stabby sword of stabbiness or the burny laser cannon of burniness is not worthy of us.

I’ll not be playing Rage again, even if someone leaves a comment telling me that the story suddenly becomes awesome and every third person stops having augmetic limbs and instead gets their tits out, I still won’t play Rage again. Because stories are meant to inspire us, move us and enrich us. They’re supposed to make us ache for more.

Rage doesn’t do any of those things. Not even close.