Lee Parry, aka @NationOfLee has painted himself up a rather splendid Astral Claws army and as he doesn’t have a blog (yet!) I said that I’d show them off for him. But, rather than just bunging up a whole load of pictures I invited Lee to write a bit of a guest post about them to go with the snaps. So, without further a do I give you Lee and his miraculous and marvellous Astral Claws:

Hello readers of The Shell Case and fellow #warmongers. First off I’d like to thank Phil (now known as Forgefather) [I don’t know who calls me that but I like it! – TSC], for allowing me to post on his site.

Like a certain Chapter Master, Lufgt Huron, I’m feeling fairly pleased with myself at the moment; this week I finally finished painting up 2,300 points of Astral Claws Space Marines for Warhammer 40,000.

A couple of weeks ago I was at Warhammer Worl and got into a conversation with Jes Goodwin (Awesome right?!), and he asked me why I’d picked Astral Claws. Without climbing too far up his anus, the reason was that I’d had a few choice Bitz Box pieces knocking around for a while (all his designs) and really wanted to build a Marine force. After reading the first few Horus Heresy novels too I was utterly sold on the Astartes. But, having been involved in one way or another with 40k since Rogue Trader, the pre & post Heresy Chapters…well…I really kind of knew it all. I wanted something new…and something that no-one else had! I really like the way that I can use my Astral Claws both as a Loyalist and Secessionist force, sometimes even both!

The first five pics here show the force all assembled – I ideally use them organised from everything from 600 point Schools league Battles ( I run my schools team – Did I mention we are champions of Cambridge?), to 1k Doubles, typical 1,500 point for Gaming Nights and the occasional 2k ding-dong. The ‘host’ before you is organised in a number of ways that way.

The whole project has taken 9 months from reading Imperial Armour 9 to this very week (I need to add a few transfers and decals…) and so far the battle Honours read: 10 Wins, 1 Draw, 4 Loss.

Pictured here is the Land Raider “Relentless” and a Drop Pod. Is the Land Raider an obvious choice? Does it attract stupid levels of enemy fire? Yes on both counts – but it is AWESOME! Both the ‘Raider and the ‘Pod are integral to the tactics I use – A “spearhead’ Assault. I tend to deliver my Assault squads directly into the heart of the foe, while also trying to take out enemy heavy support, Both of these vehicles help me achieve that! 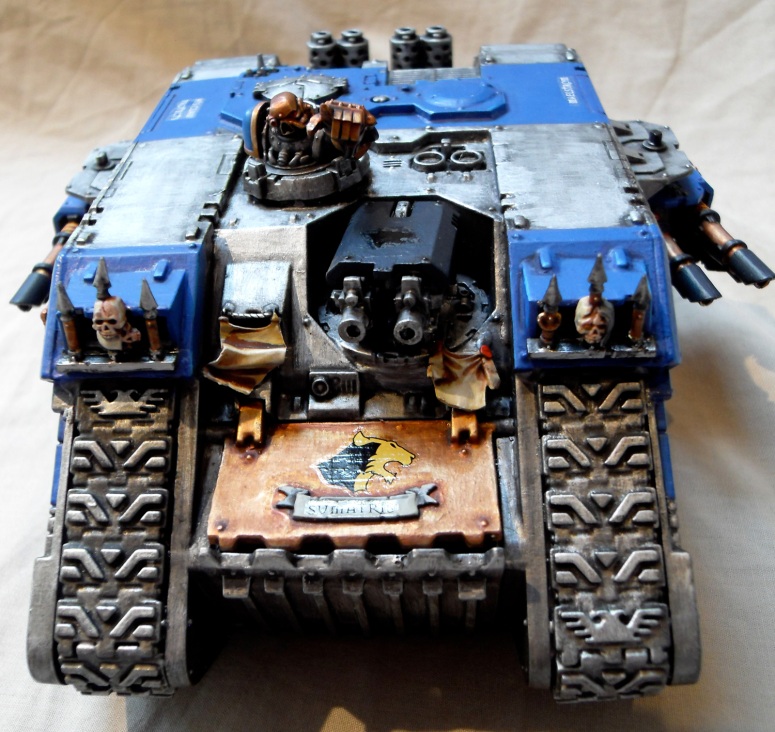 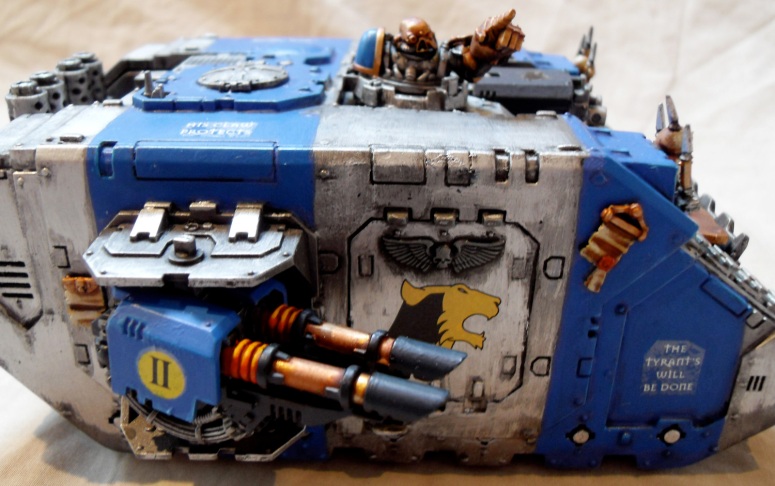 The Land Raider is covered in oaths – in my fluff, these are the remains of the petition presented to the Council of Terra by the Tiger Claws Chapter…This is 2nd Company after all… 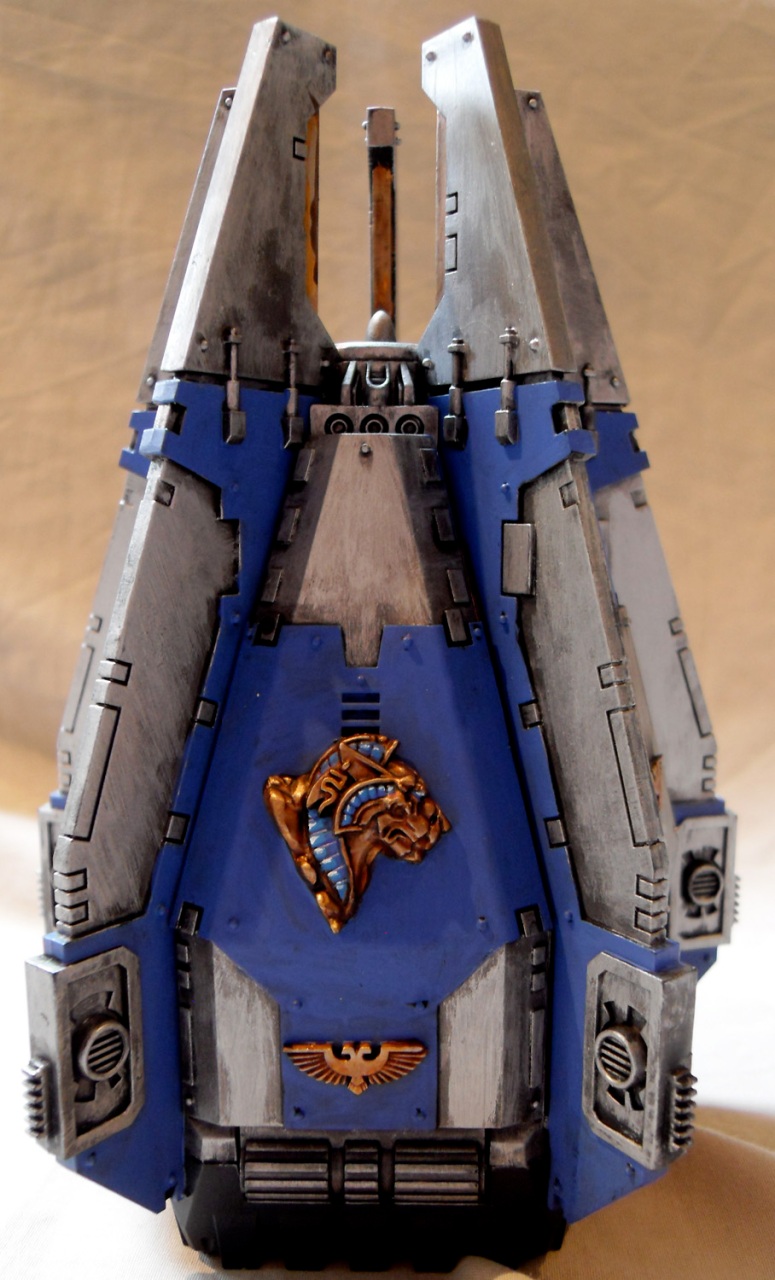 The Drop Pod was a pain to paint: but i really like the effect of the Fantasy lion head from the Elven Chariot – worked well. Both vehicles were hand painted and I can only imagine that from this point onwards I’ll ALWAYS spray vehicles…

Next, it’s the “Wardens of The Maelstrom”. All the pics here are of my Troop Choices: 1 full tactical Squad, 1 Combat Squad, 1 Scout Squad. It’s too easy to take only the very minimum of regular Marines in your list, because it’s so easy to forget how amazing in game Marines really are! One of these Squads has literally won every game for me so far, either by capturing an objective or unleashing the Emperors’ justice (Bolters at rapid fire). 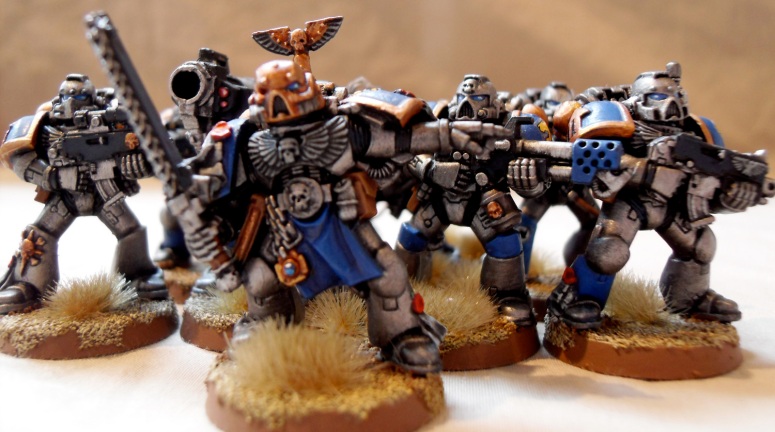 While the Tactical squad is direct from Assault On Black Reach (but with a helmet conversion – just a hint of the impending Chaos), Both the Retaliator Squad and Scout Squad contain some of my favourite models designed, one of he reasons I wanted to build a force in the place!

The Combat Squad: painted as a 1st Company Retaliator Squad – The “Tyrant’s Legion”, the Mark 8 ‘Errant’ Armour is my favourite and has been since ’92! The shoulder pads from ForgeWorld. ( also a few arm swaps with Chaos marines here…) The Sergeant has odd coloured eyes right? Kinda like it.

The Scout Squad was an old Arbites force I used for Necromunda, waaaaaay back in the 90’s, I cleaned ’em up and repainted – in a few of my lists they appear as Marines, either to bulk out the Devastators or to when I use the Tyrant’s Legion list (20 marines a squad anyone?!?)

So, a little on the paint scheme here. Armour: Boltgun metal, washed with undiluted Badab Black [How apt – TSC], drybrushed with Chainmail, then Mithril Silver. Pads etc: Ultramarine blue, highlight enchanted blue (wet blend) – washed with Asurmen Blue 3:1 water. Gold: Dwarf Bronze, wash of undiluted Ogryn Flesh, highlight Shinig Gold, highlight 2 – 4:1 Shining Gold & Chainmail. Point highlights Mithril Silver, Final wash of Ogryn Flesh. Apparently all of that is now achievable with Ghenna’s Gold – arsebiscuits… All of my Veterans and Sergeants have gold helmets and detailing. Bases: Calthan Brown, Tau Sept Ochre Drybrush, Bleached Bone highlight – I have it in my head that the surface of Badab Prime is desert…dunno why really! You might notice that some of my favourite minis/characters have very spiky bases – from the Chaos Rhino kit – this is meant to represent the “Palace of Thorns” – the Chapters fortress-monastery.

I really think the overall effect of the paint scheme works – yes there’s a uniform look, but by being non-codex, the occasional flash of blue and gold works really well.

It was Huron that said Big Guns Never Tire. And who am I to argue? Every Marine force needs a Devastator Squad, I was particularly happy with how the Sergeant turned out, a little bit of Bitz Build there!

The Dreadnought come direct from the Assault ono Black Reach box, plus a Heavy Flamer I added. The game function for both of these units is fairly straightforward…Shoot ’em in the FACE!

As for the Thunderfire Cannon – well, what a cunt to put together…Finecast this please GW! But I think it’s turned out well, the Techmarine is a total winner in-game it has to be said, the Servo-Harness makes him anything but an easy target. As for why I got it, well… it’s a big gun and I had 2 old 90’s servitors I wanted to use!

What 40K army would be complete without some mental unit that costs a lot and only tends to work half the time? 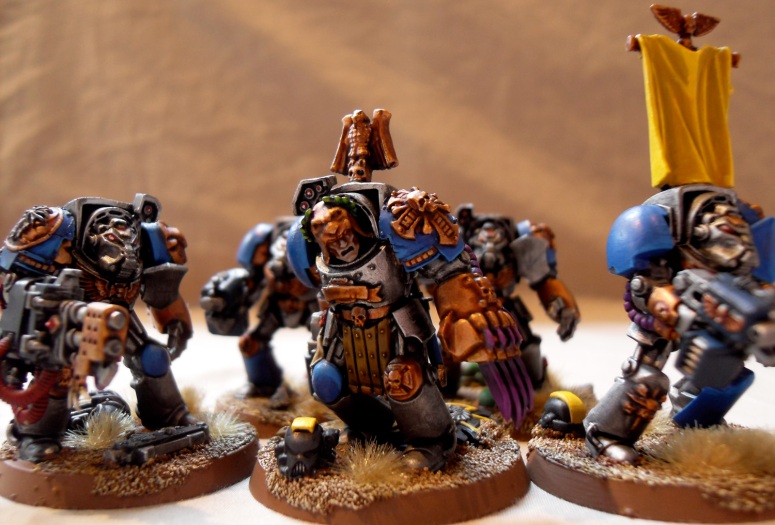 Terminators. Assault on BLack Reach again – a Space Wolf Heavy Flamer a bunch of Badab war trophies and what I think is a mean-ass looking’ Sergeant! The Sergeant’s head is the Empire General’s head from Fantasy (Tiger Claw again!) and the Lightning Claw I added for a little theme fluff there’s a number of Red Scorpion, Mantis Warrior and Nova Marine trophies on each of the bases. 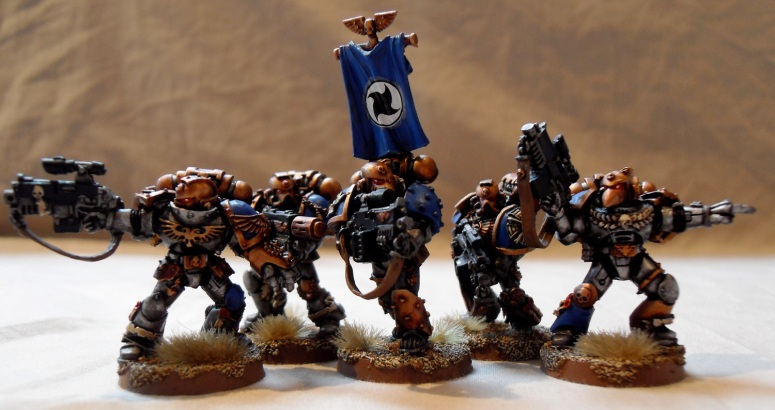 Sternguard. ALL Marines should be like this. All of them. ALL THE TIME. [Word – TSC]

Vanguard Vets. So, this unit comes in at 260 points….yeah. 260 points. 5 Marines, lightning Claws and Storm Shields. [Who cares, they look fucking cool! – TSC]

But when I put ’em with my HQ…

Heh. If there’s one thing that Forgeworld do best it’s create a mental, balls out, do or die HQ that usually makes your opponent look like he’s trying to squeeze out a square poo! 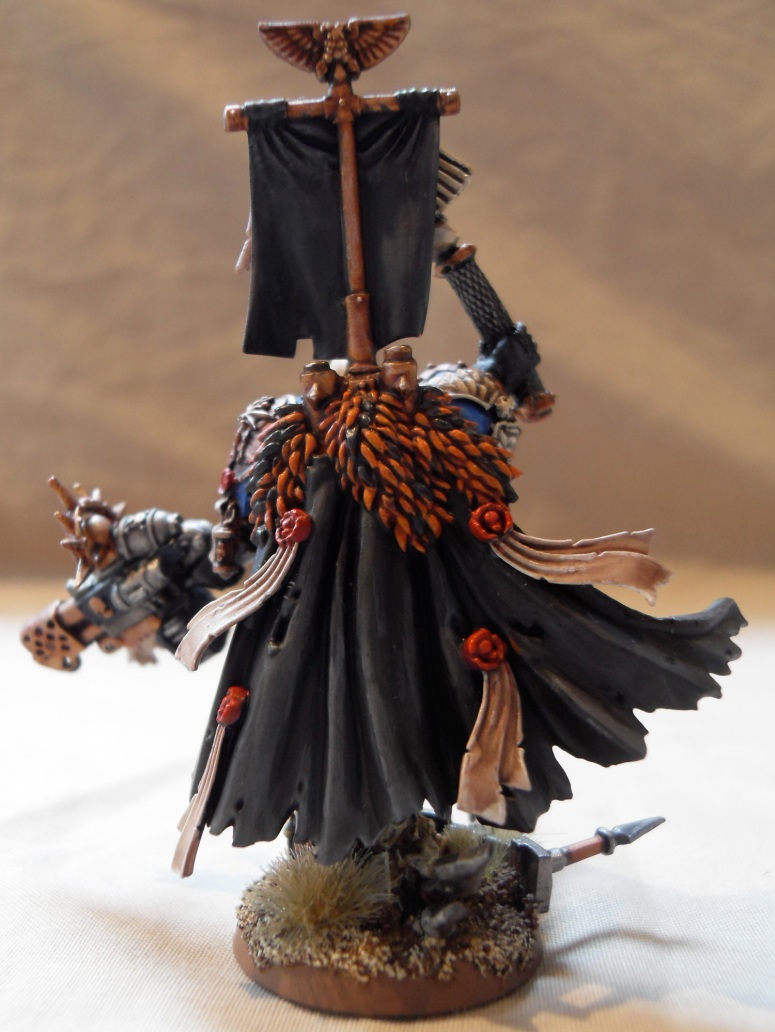 However, for smaller games I do use my Bitz Build of Chaplain Cassius from the Space Marine Codex. At Toughness 6, Combi-Flamer and all the usual Chaplain rules he does well. I’ve painted the ruff on his cloak in Tiger fur detail (wonder what Chapter he’s from then…) [Not to be a damp squib, but he’s an Ultramarine – TSC]

Armennus Valthex – The Alchemancer. I was disappointed with this model. Not really ‘special’ enough but depending on my mood he really is fun to field! A Conversion Beamer, plus making one infantry Squad have poisoned Bolters? When I use the Tyrant’s Legion rules you can have 40 Bolter shots (Rapid fire range) hitting on 3+ and wounding on a 2+! C’tan? I shit on C’tan. Swarmlord? Say hello to my little friend! Abaddon? Yeah..let’s not talk about Abaddon…. 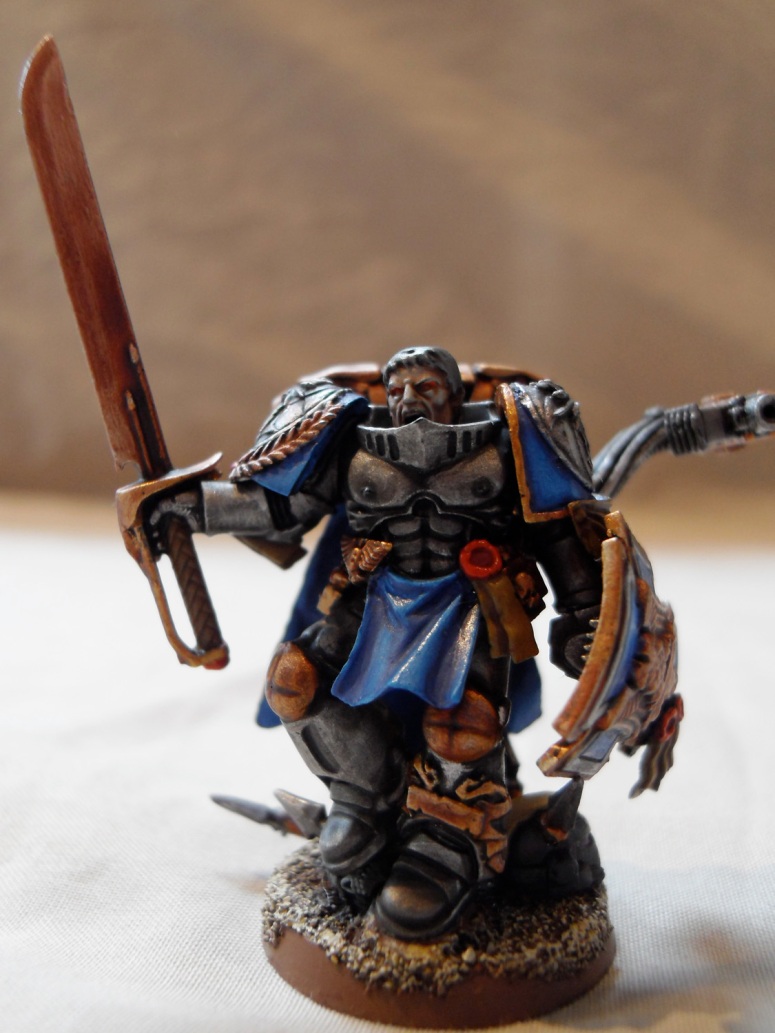 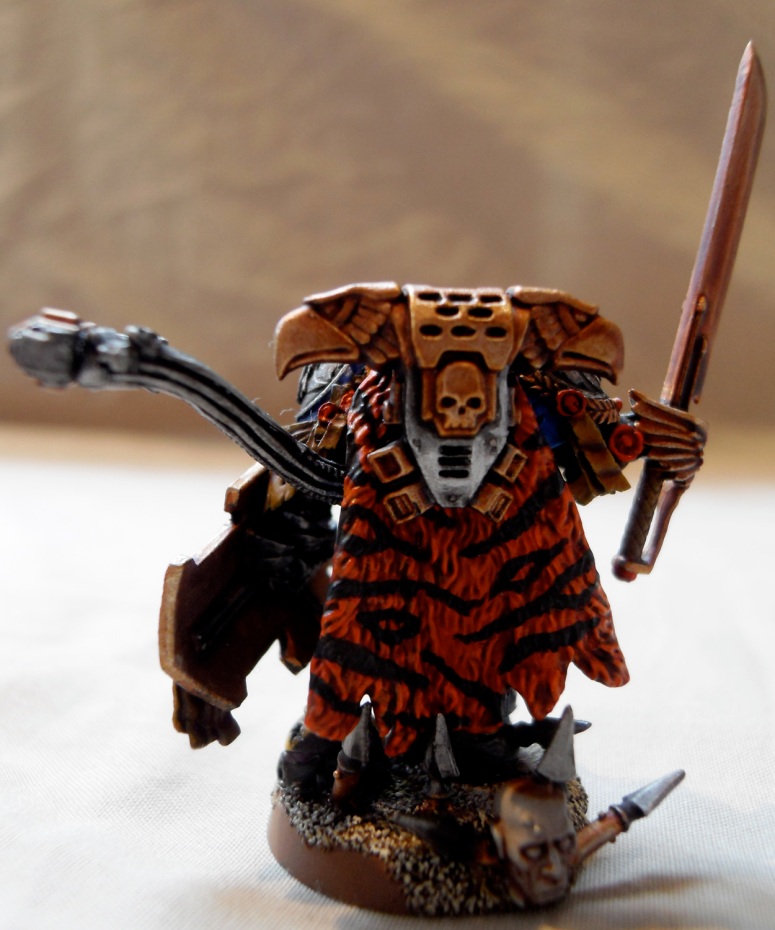 Captain Corien Sumatris – The Tyrants Champion. This is my guy, I love the character and I’m still fairly happy with the Bitz Build. Sumatris is Tiger Claw, ‘hidden’ within the Astral Claws – as Captain of the 2nd Company, I Think it’s fairly easy to assume that a number of my troops are also Tiger Claws. His base has the head of the last Champion and a Red Scorpion helmet trophy! In Game he is simply awesome…

WS 7. I 5. Furious Charge and TWO attacks for charging. He gives any unit he joins Furious Charge and +1 to their WS. Then I put the Chaplain in the unit. Then the Vanguard Vets. Then I stick them in the Land Raider. They get to charge 20″. Theres’ 24 attacks, majority needing 3+ to hit, re-rolling any misses when charging, at strength 5 with 16 of those hitting attacks getting to re-roll to wound. All wounds caused are with power weapons. The unit has a 3+ invulnerable save and is fearless. [But as I discussed today, they’ll still die just as easily as a 16 point Space Marine when a battle cannon shell lands on their heads… – TSC]