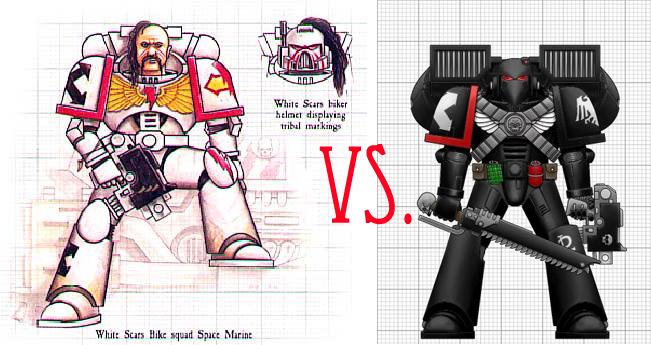 So rather than painting my Ultramarines, I’ve been wrestling, instead, with the idea of starting a new Space Marine army. I could do something, dare I say it, different, but Space Marines are awesome and they’re the only army (whatever the Chapter) that has ever excited me. I’ve dabbled with others over the years but I’ve always come back the Adeptus Astartes. So why fight it?

Now I’ve been struggling to decide which Space Marine army to collect because, realistically, the likelihood is that I won’t be collecting another time and money being an ever diminishing commodity. Thanks to Nick Kyme I had to add Salamanders to list to be considered because, well, they’re awesome. But in the end they were cut for two very important reasons.

1. I don’t like painting green (after years of painting Dark Angels badly)

2. I wanted to do an army that was significantly different to the Ultramarines and beyond taking a butt load of flamer/melta weapons I’m not sure the sons of Vulcan can offer that.

So it came down to the White Scars – Space Bikers – or the Raven Guard – Space Ninjas. So how to choose?

Well, Lee of The Chaps argued that Raven Guard would be a quick army to paint in so much as the process is; spray black, edge highlight the armour, paint the metal bits silver, base, done. This is valid but ease has never been a consideration for me on a project, but how excited I am about the army. I don’t give a monkey’s about how tactically viable or hard-hitting an army is. If I did I wouldn’t field a Battle Company of Ultramarines because, let’s be honest, you’ll always have a fight on your hands in doing so.

The idea of fielding a rapid strike force either in the form of White Scars or Raven Guard is just awesome. Be it hordes of jump pack enabled assault marines and drop pods or hordes of bikers tearing across the battle field is very evocative. And both colour schemes are incredibly striking at the same time. Plus it brings with it a host of new tactical challenges and a whole new mentality.

Playing with Ultramarines and embracing their background, as I do, it’s hard not to play as you expect them to behave in real life. Grim faced determination, faith in the battle plan and their brothers, disciplined ranks and coordinated volleys of fire. And, above all, courage and honour. Getting into the mindset of a very different Space Marine Chapter is absolutely one of the best bits about starting a new army. Working out an army list to reflect the Chapter faithfully is hugely fun and so rewarding when it finally takes to the field of battle.

The important things to remember is decide how big you want the army to be. If it’s Battle Company size fine. If it’s more like 1,500 points fine. But settle on a points value and then write a list accordingly as not only will you know what you’re aiming for so you don’t make wasteful purchases that you can’t fit in or don’t suit the army style. Plus, as you acquire toys you’ll be able to field smaller forces as you will already know the army structure you’re working to.

So, who to choose? The Space Bikers or the Space Ninjas?

I’ve always had a great fondness of the Raven Guard. Their background is awesome and they’re just so damn cool in all the books featuring them. I like them so much that I even used them as a basis for the Void Stalkers Chapter, my example Origins post for the Shell Case Shorts 4. So, they look cool, they are cool. But, and I think this is what’s stopped me from making that crucial first purchase, they’re just not as cool on the board as they care in the books. In the books they are, literally, Space Ninjas. They’re armour is more sophisticated that standard power armour allowing them to infiltrate and generally be a sneaky bunch of…well, Space Ninjas. You simply cannot reflect that in a game of 40k. And that’s disappointing.

But it’s more than a case of I can field a whole army of bikes in a White Scar army, although I can. Or that it reflects the background far more faithfully, which it does. It’s the fact, as well, that it is a huge departure from what I’m used to which is very appealing. It’s also a very different colour scheme that emphasises individuality, with the tribal markings, than the far more rank & file Ultramarines.

This penchant for lunatics on motorbikes is quite a revelation to me. I didn’t realise how much I liked the White Scars. Yes, they’re background is awesome but I never thought I’d prefer to the Space Ninjas. But, it would seem, the White Scars give me everything that the Ultramarines aren’t, which is kinda the point…