It’s been a wee while since my last Freebooter Miniatures review so to make up for it, I’m doing three. Part one is the Female Barbarian model released back in 2008. Regular readers will know that I’d had my eye on her as a member of my Middenheim warband for Mordheim which you can read about here, here and here. So I’m quite pleased I’ve got her at long last. Wait, did that sound creepy? 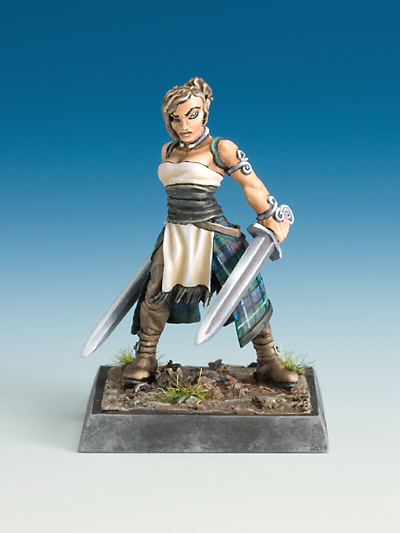 I was originally going to review this model alongside the new Amazonian Macati mantis warrior model but decided against it because on the surface the Macati model just craps all over the Barbarian model which wouldn’t be fair or true.

As I’ve talked about before with other Freebooter models, the Female Barbarian is dramatic in its simplicity. Her pose is one of barely controlled power ready to be unleashed. Her stance is one of complete combat readiness, her swords held loosely by her sides seemingly unprepared but will undoubtedly lash out viper quick to lay low any attacker. The phrase ‘come on then if you think you’re hard enough’ springs to mind.

She is, for want of a better phrase, badass.

To be fair, because of its age it doesn’t have the detail of the newer models but that’s to be expected and should be taken into consideration. The features are also more stylised than recent Freebooter models but I like it so I’m not bothered. But the important thing to remember is that its lack of detail isn’t a bad thing. Yes we all lusted after Lucy Lawless as Xena Warrior Princess back in the day but her get up was totally ridiculous considering all the arse-kickery she got up to. The weight alone would have flattened the heaving breasts that we all really watched the show for.

And that’s the point; this chick means business and she doesn’t need a brazen bodice to mang you in the face. If she did have a brazen bodice she’d mang you in the face with it. All she needs is two very serious looking short swords which I think are two of the coolest short swords I’ve seen on any model, ever. Again because there’s nothing fancy about them, they’re not exaggerated they just look like they’ll cut someone up right nice.

I also love how her outfit is essentially rags held together with leather bindings. Not for the kink I should point out, but because it’s simple. The bindings hold her outfit together whilst affording protection to torso without restricting movement. This is a model for people who like to get stuck in when wargaming. Pussies with crossbows (Lee) need not apply.

And as for the casting…no word of a lie I think the only time I used a file was to take off the bits of flash the arms were attached to and take off one mould line from the arm and that’s it. I’ve never seen a more perfectly cast  model in my 23 years of gaming. I know this could be a one-off but either way, those chaps at Freebooter know their trade and deserve to have it mentioned. Although my only grumble was that the pony tail was separate. And I’m grumbling not because it didn’t fit in the hole provided at the back of her head, which it did, but because I stuck my fingers together whilst doing so, because it’s fiddly. And I’m a numpty.