Taking a slight deviation from the usual wargaming related posts to review Avengers Assemble. A cinematic event more anticipated than Denise Richards and Neve Campbell getting off with each other in Wild Things.

In fact, I read, just before going into the cinema, that Avengers has broken the record for biggest opening by scooping a whopping $200.3 million. Which, I think you’ll agree, bat shit crazy amounts of money.

And it’s easy to see why; all your favourite super heroes in one movie kicking ass and taking names. And, for added geekgasm, it’s directed by Joss ‘Firefly’ Whedon. If you’re familiar with his work and you’ve seen Avengers Assemble you should be able to see his finger prints all over the film. Aside from his trademark ‘almost miss the action’ style of shooting which gives his work a very visceral sense of being a part of the action – which works wonders in 3D – he also has the odd flourish where music replaces the audio to utterly sublime effect.  Combine that style with the fact that he is a die hard comic book fanatic and all round geek and you have the beginnings of a pretty awesome movie.

And, to be honest, it is. Granted, it’s not a Hollywood epic and it’s certainly not going to win awards for most original screenplay but it will get the Oscar for being fucking cool. The plot is straight forward enough – although you really do needed to have seen at least Thor before parting with you eight or nine pounds otherwise you might find yourself slightly confused at times.

But, in a nutshell, Thor’s brother, Loki, in an act of petty vengeance throws his lot in with some bad eggs hell-bent on subjugating Earth, a world that Thor loves and has sworn to protect. Presumably because he’s nailing Natalie Portman. Fair one.

Needless to say the Avengers are, ahem, assembled. However the first two-thirds of the film is the Avengers beating the living shit out of each other whilst they work out their various issues, whatever they may be. If I’m honest, although it’s way cool to see Iron Man and Thor trying to mang each other in the face, it does go on for slightly too long. And, if I’m honest, I think was as much about settling the old comic book geek debate of ‘out of hero x and hero y, who would win’. Throw in Loki manipulating just about everyone to do his evil bidding and it’s a lot of time not actually doing anything. But, to be fair, it’s still hugely entertaining and it is, strictly speaking an origins movie so some concessions must be made. 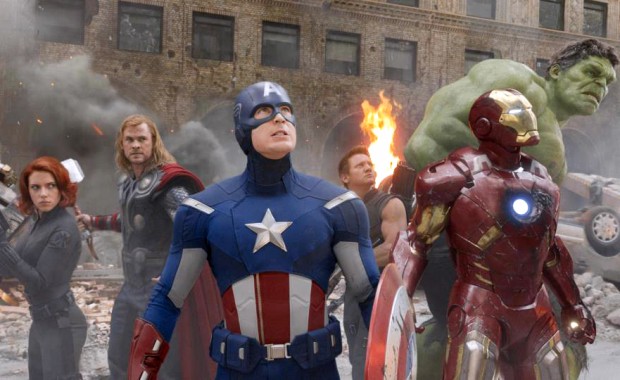 Obviously they all work out their differences and after they’ve sorted out the Avengers secret handshake get on with the business of stopping Loki and the legion of gribbly alien bastards laying waste to NYC. Although Tom Hiddleston does very well as the new and improved sociopathic Loki, I couldn’t help but draw comparisons to the Joker in The Dark Knight, played by the late Heath Ledger and how he just doesn’t come close to the same level of hatred and spite. Basically he gets as far as spoilt rich kid who needs taking down a peg or two. And once you realise that there’s really very little peril involved. Because he’s a wanker.

Don’t get me wrong, Avengers Assembler is absolutely awesome. I mean truly something special to behold, but just doesn’t stand up to anything more than the most cursory examination of the plot. But that’s fine because it’s hugely entertaining, which is sort of the point. Robert Downey Jr’s Tony Stark/Iron Man steals the show as he makes Captain America look like a Warhammer 40,000 second edition Ultramarine and everyone else look a bit thick or slightly less awesome either through intellect or his armoured suit of awesomeness.

Although the secret star of the film was Mark Ruffalo and the latest incarnation of the Hulk. He gets the balance of genius, tortured soul and smart mouth exactly right, and it translates through to the Hulk when he’s finally unleashed. Considering two pretty heavy weight actors have taken a stab a crack at the Hulk already, Ruffalo out does them both and I really hope he reprises the role both in Avengers 2 and the next Hulk movie.

Avengers Assemble is visually spectacular (and no I don’t mean Scarltt Johansson…although…) and thanks to Whedon’s unique camera means you’re always means you’re full aware of the scale of the action, even if you can’t see it all. Yes there are some plot holes and the odd sequence is a tad over indulgent but that’s what happens when you put a fan behind the camera. It’s not a complaint, just an observation. All the characters are super cool super heroes that you either want to be or do, depending on gender and life choices, and having them all in one film, even Miss Potts with her sinfully short shorts and pert bottom, is a huge treat and for no other reason makes Avengers Assemble an absolute must see.

One thought on “Avengers Assemble – A Review”