Back in April I attended Salute with Jeremy & Lee of The Chaps. On the drive up we contemplated our purchases. Lee wanted to get some bits and bobs for his Grey Knights and Jeremy just wanted to spend as much money as possible.

I wanted a Relic Contemptor Dreadnought. My intention had been to arm it with two assault cannons and a cyclone missile launcher. And then Lee opened his big stupid mouth and uttered; ‘Do you know what would be way cool? Two autocannons.’ Of course it would be cool. The retro styling of the autocannons looks awesome. And so the seed was sown.

As the journey went on it didn’t take long for to be convinced by Jeremy and Lee that I was getting two Dreadnoughts. I had kinda wanted to anyway but I let them persuade me completely. The only compromise was I had to drop the cyclone missile launcher. But I could live with that. And it’s quite possibly the shortest space of time between someone arriving at Salute and parting with almost all of their hard earned cash. £94 to be precise.

I finally got around to building the dreadnoughts over the weekend, having put it off both for reasons of time and good old fashioned intimidation. It’s not a kit you want to fuck up especially as each leg is completely posable and comes in 4 parts. However, its many parts actually present a problem because, at the end of the day, it’s resin. And resin loves superglue. Resin is the obsessive girlfriend who doesn’t like you seeing your mates. Once it’s stuck it’s stuck and you’re buggered if you didn’t get the position quite right.

Unfortunately that is a distinct possibility because the autocannons are too bulky for the shoulder attachments which meant I ha to position them at an angle. 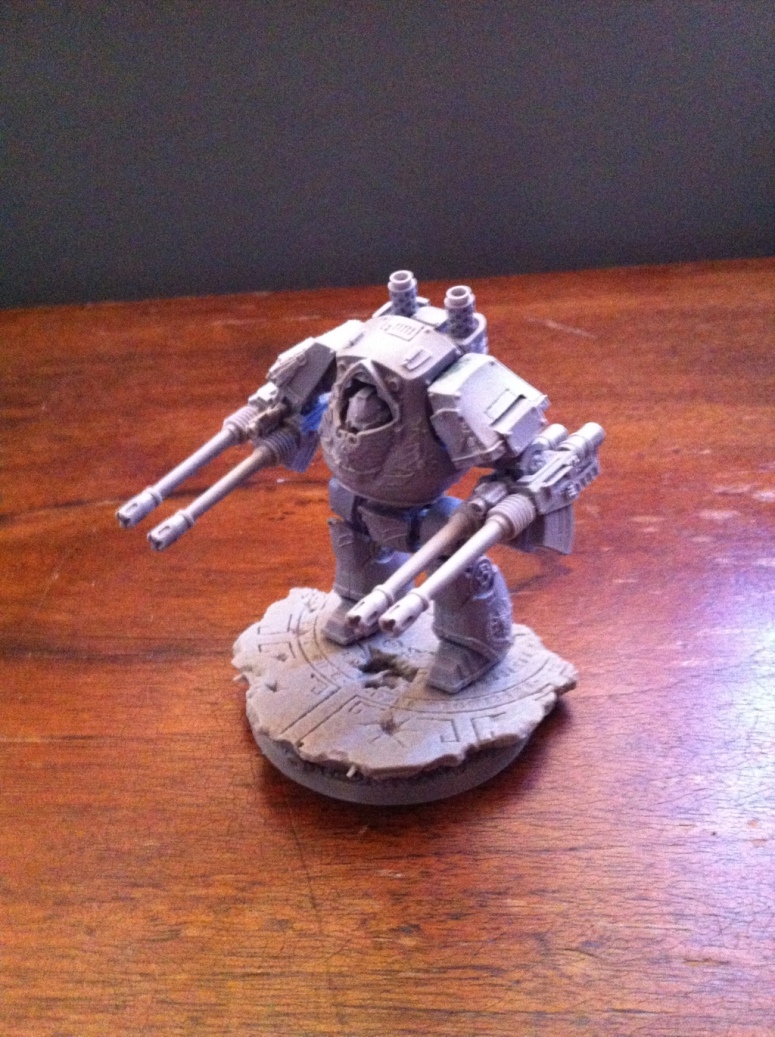 It’s not a big deal but it’s very frustrating as, because each arm/weapon system comes in multiple parts and is, to a degree, posable it’s very difficult to get it exactly right. This goes double for the assault cannon which is so badly thought out it isn’t compatible with it’s own ratchet joint. I actually had to clip and file away some of it so it’d fit in a slot that should have been a concave groove rather than a concave curve.

I was quite lucky and managed to get the positioning about right but it shouldn’t be necessary to resculpt joints in a kit as expensive as that.

Which brings me onto the quality of the casting. Or lack thereof. Now, I bought two of everything. Two bodies, two assault cannons and two autocannons. All of them had defects. Both autocannons had warped barrels, the shoulder of one body had a hole in it 1mm wide by 5mm deep. The bottom of the torso on both had rough edges terrible mould lines that lost detail, and even holes. For that kind of money it’s criminal that Forgeworld’a QA allowed them through. Even one of the rods of the assault cannon was shorter than the others! I mean come on!

Fortunately I had, early that week invested in some liquid green stuff. Which worked okay but for anything bigger than air pockets is actually quite poor. And takes ages to dry and isn’t as durable as the old fashioned stuff.

I’m sure, had I rung Forgeworld they would have sent replacements but there’s no guarantee they would have been better and it’s just delay and faff that the customer is the only one who suffers for.

The model itself though, is beautiful. The posable nature is a good thing despite its inevitable difficulties with gluing. As you can see from above I had one in the process of striding through debris. It was fiddly but the ball joint allows for some real diversity in what you can do with the kit.

The detail on the chest is excellent and the adorned knee and greaves makes it feel revered rather than gaudy. I’m also impressed with how the assault cannons are constructed – poor casting methods aside.

In game terms it’s a little more than a venerable but you get an energy shield. Plus the particularly awesome brand of assault cannons gives you 6 shots apiece instead of 4. But really who cares about all that when you’ll have one of the most beautiful bullet magnets in the Warhammer 40,000 game.

I wouldn’t let the issues I had with casting quality or the slightly silly way the weapon mounts have been designed put you off getting either pattern of Contemptor. It is still an immensely cool model and the finished article hugely satisfying to behold.

All I’ll say is that carefully planning the pose and positioning of each piece will benefit you, as would looking into magnets for the weapons, both from a positioning and storage point of view. Providing you give your self plenty of prep time you shouldn’t have too many problems or lose too much sanity.

Bases by Micro Art Studio, by the way.