It’s review time again and this time it’s the turn of A Call to Arms: Noble Armada by Mongoose Publishing. I first came across Mongoose when my brother and fellow Alliance member, @Chris_S_79 pointed me in their direction. Being a total sucker for anything with space ships I didn’t need much convincing to get in touch with them. And, thanks to their incredible kindness, this will actually be the first of two reviews, the other being Mongoose’s Star Fleet game. But more on that another time.

Noble Armada is a space opera in the truest sense. It has a fantastic back story, based on the Fading Suns RPG, that recounts the rise and fall of Empires and religions. And it’s so good to see a developer put as much effort into the background as they do the rules. I’ll be honest, I couldn’t quite keep track of who was who but essentially through war, betrayal, and, ironically, the longest era of peace and prosperity the Known Worlds have been carved up and divided amongst a handful of noble houses who are quite happy to beat the living daylights out of each other. The twist is that the galaxy is dying all about them – supposedly due to galactic jump gates drawing their power from the stars themselves – and yet, thanks to rivalries, religion and ignorance, they’re all too suspicious of one another and the alien races of the galaxy to do anything about it.

The background has the right amount of grit to keep it interesting and no one faction is likeable over the others. Because they’re all bastards basically. Or nutters. Mustn’t forget the nutters. I’m harping on a bit just because it’s refreshing to read a rulebook that has had the same attention to the background as it has the rules. It means that you understand what you’re fighting for which is a very important part of wargaming.

The other truly fantastic part of the Noble Armada is the campaign and scenario section. It’s huge. Sixteen pages of scenarios. And the campaign rules include strategic assets, resources, planets, crew experience, the whole shot. It’s so comprehensive it’d be worth finching for other games with frankly lousy or non-existence campaign rules. So, thus far, Noble Armada has the two most important elements for me in a game; good fluff and good campaign rules. 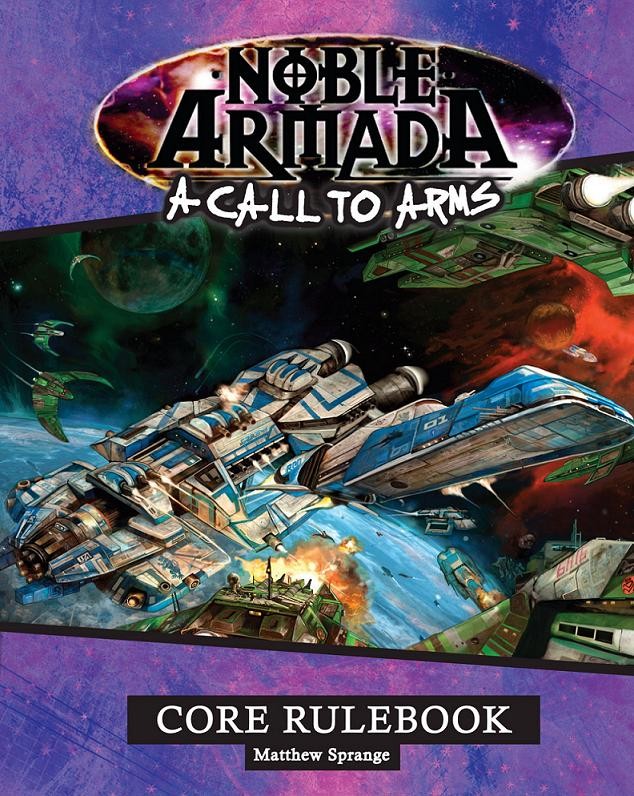 The rules themselves I wasn’t too sure about at first. In Noble Armada each side takes it in turns to move, then shoot and so on. So it’s kinda like chess. You position your pieces and then strike. I don’t like games or rules that break the natural flow of play – which is why I hate things like overwatch or snap fire or any of that toss – but the rules reflect the grandeur of the game.

Now, bear with me for this thought because it may seem a little out there but it kind of feels like one should play Noble Armada with Cello Suite No.1 by Bach playing in the background (what? I can be cultured!). The movement phase is a delicate dance of pirouetting ships of war. Before all hell breaks loose in the shooting phase. Which means that whoever wins the initiative is pretty important in Noble Armada but I suppose that’s true of all games.

And hell is right. The shooting phase is a little on the complicated side. Not because it doesn’t work or anything, just that there are quite a few stages as well as special rules and, I’ll be honest, I had to read it through a couple of times. Damaging a ship was a bit of a tough read but it does make sense. Ships have damage points which is fairly standard, however, they have a threshold which denotes the level of damage it can take before systems are severely compromised and it becomes crippled. It’s a nice idea and rather nicely represents that pounding a ship of war can take and keep going. The Critical Damage table is a bit of a faff and requires a degree of paper work keeping track of the level of critical damage the ship has taken and the resulting modifiers. It’s a cool idea, just a bit fussy for me.

There are a healthy number of weapon systems in Noble Armada capable of dishing out some pretty awesome amounts of damage and each have their benefits. Each weapon has special rules attached to them which at first I thought a tad unnecessary but even a lasgun in Warhammer 40,000 has a special rule attached to it. And actually all the special rules are balanced, make some real sense, and make for a very fun game.

The one part of the game that I still can’t decide on is the boarding phase simply because the rules seem a little bonkers primarily because they use grapples. It just doesn’t make sense to me that a ship would want to lash itself to an object of tremendous force and armed if massive massive guns. Its guaranteed carnage, that’s for sure, but I’d sooner fire boarding parties and let them take their chances than risk the ship.

That gripe aside it all works rather nicely. There will be more a couple of page turning moments as you get to grips with all the special rules, traits and orders, but it’s written well enough so persevere. It’s different to the other games I’ve played which keeps things fresh. I could do with slightly simpler profiles but that’s my preference and Noble Armada is all about the detail both in its background and the game, and that’s its great appeal. But, more than anything, as I mentioned, it’s just such an elegant game. So much so you almost fail to notice the extremity its tactics. And those tactics need to be flexible because of the nature of the phases it can get very tasty, very quickly.

And finally the models.

They’re way cool. Compared to resin models produced by other companies the detail isn’t as sharp but the models are great looking and there’s some really original designs in the ranges. What’s nice is that the fleets have a look that runs through the ships without basically making smaller versions of the same ship. They’re all very distinctive whilst still being identifiable as part of their respective fleet. In the fleet set you get a lot of metal for your £24.99 and it’s more than enough to have a bloody good scrap. The models are also a sensible size so you can really throw down some big games. This can only be a good thing.

2 thoughts on “Noble Armada – A Review”