Some of you may remember that a couple of weeks ago I did a give away on Twitter for a Ro-Kan starter set for the awesome Bushido game by GCT that I reviewed back in April.

The lucky winner was a good and loyal #warmonger – Nick Rapson (@Nicks_IT). I’d spoken to Nick some time ago about writing a guest post for The Shell Case so he decided to write an unboxing article about the new box of shiny I’d (finally) sent him.

So without further a do, I give you Mr Nick Rapson…

The serene martial artist masters of the Ro-Kan have long viewed themselves as above all mortal and mundane conflicts. Now, following the Han civil war, the rise of the Cult of Yurei, and the incursion of the Savage Wave, the monks of Ro-Kan are being dragged into the clandestine wars of universal balance – a war in which they will reluctantly turn out to be key players. The monks follow an age-old path and know the secrets of Ki better than any others, but they are few and divided – will they be able to unite and join forces before it is too late?

Thus are the Temple of Ro-Kan described in the Bushido skirmish game from GCT Studios. 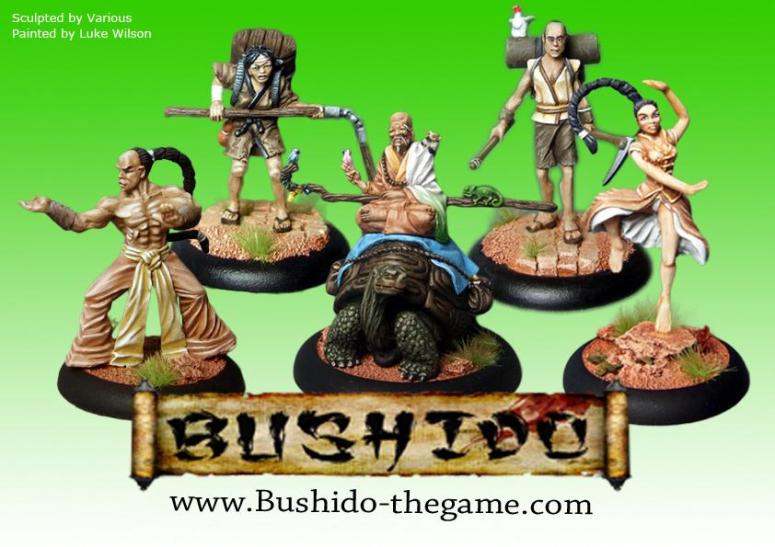 I recently won a Ro-Kan starter set for the game and I have to say, they are just about as far removed from my Space Wolves as I’ve ever been!  I want to cover the set as a whole so first off, here’s what you get in the pack:

It’s good to see the trend of getting everything you need to play in a faction pack is still going strong.  All you really need to play are two packs – and some space!

Some of them require assembly but that’s fine.  Though some of the pieces are very fine so pinning them to make stronger bonds isn’t really an option.  I’ve yet to try to glue them together properly but I suspect I’ll be using a fair amount of Liquid Greenstuff to achieve that stronger bond.  No matter how careful we might be, wargames models are seldom handled delicately and to be honest, I’d be worried about some of these breaking once they’d been glued.

Aside from that, the detail is of high level.  The scale is 32mm and since all are unarmoured they look very slender.  They also have a very oriental look about them which GCT Studios has captured perfectly.

Nothing special here – they’re slotta-bases that have raised lips around their circumference which should allow for some interesting basing patterns / materials.

These contain all of the model-specific rules you need to know during the game.  I have to admit that I found the symbols quite difficult to read but I imagine that once I get to know the rules and characters, that won’t be so much of a problem.  The cards felt a little flimsy to me so to protect them, might be best to laminate them.

Just 13 standard six-sided dice – exactly what you need to play the game.

The booklet is small and compact so definitely easy to carry around.  Unfortunately, given the (at first glance) complexity of the rules, most of the booklet is made up of text.  A few tables and some small artwork break it up a bit but I found it quite difficult to keep reading until the end.  A scenario rounds out the booklet, which is useful – particularly when learning new rules!