Okay, first off a little confession and an apology. Those fine chaps at Dream Pod 9 sent me the starter set of Heavy Gear Blitz almost a year ago. For one reason or another it’s taken me this long to get my act together. So very humble apology to John and Jason at DP9 and hopefully this was worth the wait. So without further ado I give you…

First off, the background is ace. Aside from being richly detailed, each faction’s fluff is written from their point of view so you not only got a really solid idea of what they’re all about but their point of view towards each other and the various conflicts. It’s refreshingly honest and gives you a solid understanding of the world and everyone’s place in it. And, moreover, because you can piece together the whole story you can choose you faction understanding who they are and what they’re all about.

On to the game itself. When I first looked at the profile card I was slightly horrified by the volume of characteristics but if I’d bothered to read the rules at the time I would have understood that 1. it is a bit fiddly but 2. but it does work. I admit to being put off by the movement statistics as mechs can have four values – both combat and top speeds for walking and ‘ground’ which is using the inbuilt wheels. There’s also a host of modifiers for moving at those varying speeds for performing actions.

Each unit will have a specified action value which excludes movements which is free (are you listening MERCS Minis?) this allows them to shoot mechs in the face, mang mechs in the face or performance one of a plethora of electronic actions which will make it easier to shoot or mang mechs in the face in following turns. Needless to say the actions you choose for you units and in what order you perform them can have a real impact on the game as using one mech essentially as a spotter/sacrificial lamb then your odds of success increase considerably.

The chaps at Dreampod 9 have worked very hard to make the environment arguably the most important factor in Heavy Gear. The factions themselves are evenly matched with roughly the same weaponry – which is reasonable considering they inhabit the same planet, fighting over the same resources and constantly trying to out do one another. There are ten different types of terrain each with their own impact on play. The result is that, if the board is set out correctly you can experience a very different game turn to turn.

Combined with sensors it has the stench of genius about it. Normally I groan whenever any mentions electronic warfare in a game because it’s usually done in such a ham-fisted fashion that it adds nothing to a game other than a headache. Heavy Gear though gets it right. Basically there’s a difference between suspecting a unit is behind a building and knowing a unit is behind a building. A successful sensor sweep will mean the difference between you moving around said building ready to engage and moving around the building without a solid idea of where the target is, which makes you extremely vulnerable. This obviously also applies to different scenery types to varying degrees and therefore trying to weed out a unit concealed in a dense patch of trees isn’t as straight forward as first appeared.

One of the stand out coolest rules is Overkill. A value assigned to every mech and tank that if you reach in a single attack you just destroy the vehicle outright rather than accumulate damage points. This not only makes complete and total sense but it’s a rule that would massively improve a few others I can think of.

Heavy Gear also has an abundance of weapons and other units. Much like the soon to be released Dropzone Commander, Heavy Gear is all about combined arms. Aside from mech variants up the arse, there’s also an array of tanks and artillery pieces that provide heavy fire and range to support your plucky mech pilots. And some of the tanks are huge. Like pants on head retarded huge. The sheer number of variants available in the army lists almost counts against Heavy Gear as coming to the game cold it could be rather overwhelming. And the same could be said for the volume of weapons available. There’s bloody millions of them and, again, if you don’t know what you’re looking at it’s hard to know what’s the best bang for your buck. 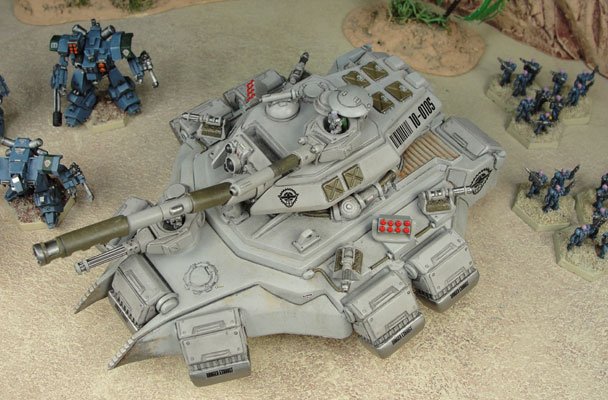 Another nice feature is how scenarios are built. Rather than the standard missions that state what the objective is and how you win, Heavy Gear has a more modular approach which allows for tremendous variety and encourages gamers to come up with the story line themselves rather than having it spoon fed. Of this I approve. It works like this: build your army, establish priority level (this dictates the units available to you), set up the board, determine deployment zones and then determine missions and objectives. You also have the option of taking support options. These can range from artillery to airstrikes as well as defensive turrets and the like. It allows you to not only play games where one side is attacking a reinforced position, but also give the game a much greater sense of completeness with fighters and heavy artillery shells screaming overhead.

Dreampod 9 sent me was the basic starter set which contained 3 basic mechs aside. The look of the models is great and they go together well enough but I do feel that the weapons are a faff, especially when trying to position to arms and a metal gun component. It just makes it harder than it needs to be because of the super glue. Detail wise the models could be a little sharper but I’m also quite conscious that they’re the most basic models available and I’ve seen newer releases on gaming websites and the quality is definitely there. The box also comes with a nice range of weapons so you can kit your mechs out nicely. I built mine before reading the rules so I was going purely on looks. Some of the guns look a little dated and because of flash a couple of the weapons have some pretty pronounced weak spots which will be problematic when clipping and cleaning. Of course, when it all boils down to it, you get to have mechs in large numbers running around the board blowing the living daylights out of each other and so any niggles building the models are instantly forgiven.

Heavy Gear isn’t the most straight forward game in the world – mainly because of the sheer volume of choice and weapon rule variations – and in a large game the amount of book-keeping could be frustrating but it’s a learning curve and in some ways the pace of play suits the amount of consideration the average game will require. The various layers to moving, shooting, scanning and locking on warrant careful consideration, as does the order in which you activate your units. The truth is the style of game play won’t suit everyone but, you know, mechs are awesome.

One thought on “Heavy Gear Blitz – A Review”