Well they like to think they do. Those damn Brits and their silly delusions of global dominance. The Covenant know what’s what.

Anyway, I thought I’d take a look at some of the goodies beyond the starter fleet and the dreadnought available to the tea drinking, stiff upper lip having, salty seamen (oh yes I did).

So first up is the Avenger Class fleet Carrier.

Now one of the thing I love about the Britannian fleet is, more than any others is that sense of improvised ‘it’ll do’. Good enough is good enough. The designs are low-budget and the contractors bid even lower than that to build them. They’re all crude steel, ballast tanks and prows akin to 1940’s bras.

The Avenger Class is, essentially, two Ruler Class battleships lashed together with a flight deck on top. Which is just awesome. Actually it’s batshit crazy but that’s what makes it awesome.

The great thing about the Avenger class from a modelling point of view is that it is, in fact, two Ruler Class battleships lashed together which means you know what to expect from that point of view. The rest of the model is pretty straight forward to put together with minimal faff and the flight deck is a nice thick bit of resin which holds the struts nicely.

My only gripe about the model there’s nothing to fill the two holes beneath the flight deck where the smoke stacks would normally go. To be fair it can’t be seen when you’re playing the game but you’ll know it’s there and cringe every time someone picks up the model to take a squizz at it.

In game terms she’s a bit of an expensive old dame considering how quickly she’ll fall to bits. But what she lacks in resilience she sure does make for it with bite. Toting no less than four weapon systems, two of which are torpedoes she’ll not only give you a bloody nose but she’ll do so at range band 4. The problem is that she’ll be most effective at range band 2, like most ships. And most ships are far more effective in a straight up fight, although 11 fore torpedoes is not to be sniffed at.

The Avenger Class is a genuine warship, unlike the FSA carrier that’s for girls. She won’t take a lot of punishment but the torpedoes means she’ll keep fighting to her last. If it were me I’d take two battleships and stick the Avenger in the middle.

On to the Agincourt Class gunship.

Now these suckers are a bit tasty. 20 points more than a Tribal Class cruiser it has an extra point of damage, critical rating and hull. For those 20 points you also get a slightly improved turret and fore torpedo battery. The gunship however, swaps out its torpedo broadside for a rear mounted torpedo turret. I’m not too sure about this as the cruisers enabled you to sail through an enemy formation and dish out damage all the way through and out the other side. The torpedo turret has a 180 degree arc to the rear which rather suggests that the tactic is deterring anything that’s survived which it will because you’re initial volley won’t be as punchy.

Tactically gunships rely either on a protracted flanking action so they can hammer a larger target, or work in concert with a unit of Tribal Class, one punching a hole, the other sailing through and delivering the killing blow. Just bear in mind they’re still British and will explode from a strong breeze.

The models themselves are a bit mixed for me. They’re kinda like someone put a Tribal Class in a car crusher for a few minutes being shorter and stockier than its sister ship. But I suppose its kinda the point. It’s a blunt instrument. Well, a blunt instrument by the usual blunt standards of the Britannian fleet.

The Swift Class Corvette is quite the contrast. It’s sleek, it’s sexy and…pointless.

Perhaps a little harsh but at 20 points a pop they’re soft and squishy and have a pretty shit gun. What makes them scary is when a unit of 5 mob something, but even then they’ll be outclassed by most opposing models of similar class. However, they are mad fast – movement 13 and they’ve got the Elusive Target special rule. Which I guess is the point of Corvettes, they’re the sacrificial lambs of the Britannian fleets. Not very sporting really but they’re great at getting up close and making a nuisance of themselves.

The models are seriously lovely. As I say, they’re sleek and look as fast as they play. If I’m honest, they’re my favourite models in the Britannian fleet next to the dreadnought (which is the automatic favourite of every fleet – it’s the law).

The Orion Class destroyers, on the other hand, are awesome. The big brother of the frigate and 10 points more it’s essentially the support ship equivalent of the gunship. And like the gunship its the bulkier option. Purely in the looks department you understand, in-game terms it’s no tougher. 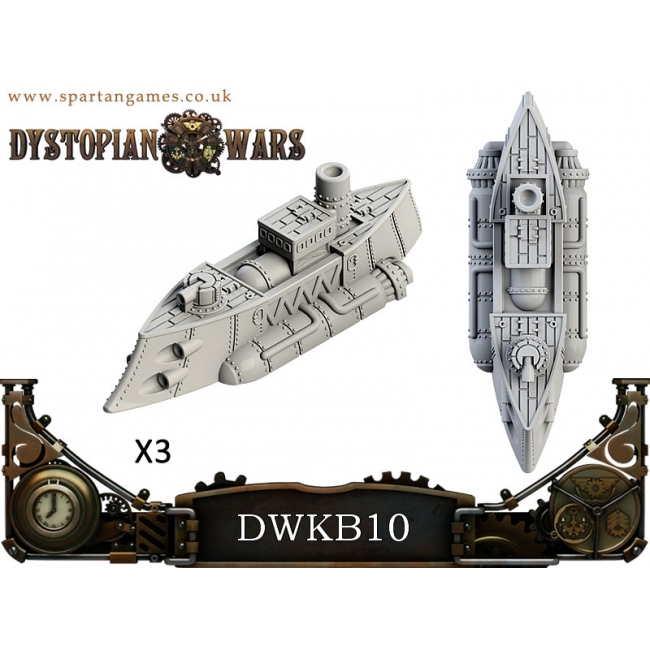 What you get for the extra points is one fewer turret but an extra 2, 3 & 2 torpedoes at range bands 2-4. Which is actually bloody horrid. To put it another way, a unit of 4 Orion class destroyers at range band 2 will throw out 15 dice. Fifteen. Fucking. Dice. For 140 points.

They are the ultimate mob unit and worth every penny and every point. They’re just horrible and smell and they are bum faces. But for all their scary mobbing power they are still support ships and made from paper mache and positive thoughts. They will die. But if you use their firepower and 11 inch move wisely they will take something much bigger down with them.

2 thoughts on “Britannia Rules the Waves”