As promised, here’s the background for the new additions to the Covenant of Antarctica 5th Fleet which I first chronicled here. 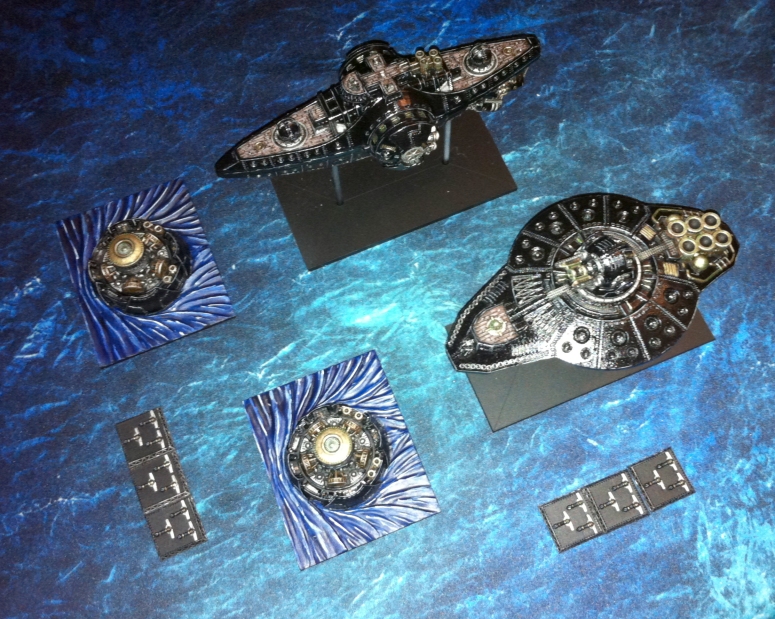 The Department of Time Manipulation and Displacement is the only part of Covenant society that operates with any kind of secrecy in what is an otherwise open and Utopian society. Founded in 1865 whose founders, combined with the knowledge in the great repository,  were fascinated with science fictions writings by the likes of Jules Verne who played around with notions of multi-dimensionalism and the accepted natural order of the world.

Within the year the first Dimensional Transmogrification Emitter was built and tested with mixed results. Professors Pendleton and Kline having pioneered the field of time and space manipulation had attempted to teleport a bowl of fruit 6 metres, from one side of the laboratory to the other. They, instead, teleported the bowl of fruit 6 hours into the future, the bowl reappearing right where it had disappeared in shower of tachyons as Pendleton and Kline stood arguing over who had made the fatal miscalculation.

Further experiments were met with similar results with very little being achieved in way of instantaneous transportation – the military application of which would have granted the Covenant and insurmountable tactical advantage. Despite months of testing and the destruction of their original lab (and the surrounding facility) the professors were forced to admit defeat. Instead they focussed their energies on the areas that had met with some success. Specifically the ability to impact upon the flow of time on an object or objects.

Pendleton and Kline discovered they were able to project and sustain temporal distortion fields that would alter the flow of time, allowing objects to seemingly speed up or slow down depending on the polarity of the field. In essence a time dilation field, as they would become known, could alter the flow of time around an object to allow it to skip ahead or slow down to a stand still.

By the time Jules Verne himself had fled to Antarctica to pursue his life as a writer free from persecution in his native France the art of time dilation had been all but perfected. When Pendleton and Kline heard that Verne was the Covenant’s latest refugee they immediately descended on the writer with bottle of brandy. It was during this raucous, alcohol fuelled, meeting that a break through was made. Verne proposed that the problem was they were trying to move mass through space rather than trying to move space to allow the object to pass through it.

The resulting experiments resulted in success, albeit limited. The power output required to bend the fabric of space was tremendous and meant that the generators were few in number and excessively large for a relatively short-range. It forever laid to rest the hopes of Pendleton and Kline for an effective transportation system beyond supplies being moved more effectively across the Empire of Ice. Militarily Time Dilation Generators could be deployed to allow units to be rapidly redeployed as needed as well as afford nearby ships or armour protection from incoming fire. Although temperamental to the point of fatal, their potential gains were enough for the Antarctica generals to petition the Department of Time Manipulation and Displacement to allow them to deploy the time dilation orbs in theatre of war.

The Department recognised the advantage the generators would provide and so designed an articulated chassis to house the generators for field operations. However, the Department of Time Manipulation and Displacement, which had grown to a staff of hundreds with Pendleton and Kline at its head, shrewdly refused to allow themselves to co-opted into the Covenant military. To this day this has meant that a commanding officer wishing to use a time dilation orb must petition the department in writing who may refuse or recall their assets at any time.

The additions of the CATDO Jules Verne and Thomas Kuhn to the 5th Fleet was as much a surprise to Commodore Stone as it was to his command staff as he had put in his request to the Department of Time Manipulation and Displacement when he was first given command. Something bordering on tradition, most fleet commanders requested a time dilation orb as a matter of course.

So it is with much rancour from Stone’s detractors in fleet command that he was assigned to by the mysterious department. Completely autonomous from the admiralty they were powerless to prevent it and going against the whims of the Department and the last ranking officer to decry them to the Covenant council found himself commander of a fishing scow.

Stone is yet to use the Verne or the Kuhn to their fullest potential, the tactics required forcing a commander to think in 4 dimensions rather than the standard 3 but already he is realising the potential of catapulting his battleships forwards to deliver a hammer blow before teleporting them back to the safety of the line.

To serve aboard a time dilation orb requires the utmost bravery. Aside from being a primary target for the Covenant’s enemies, rending the laws of space and time is a risky affair. Any time a glitch causes a vessel to be trapped in space/time the potential disaster on board a time dilation orb is immense. Crews are fortunate if a catastrophic malfunctions results in the destruction of the orb. If they are unlucky they can be catapulted through space and materialise inside bulkheads, generators or even gun barrels of nearby ships or teleported to unknown point in time never to be seen again.

When the 5th fleet returned to the New Halley docks for repair and resupply, following a successful campaign in the North Pacific against the Russian menace, they found, on the South Halley Aerodrome, the Daedalus Class Apollo and the imposing and revered Epicurus Class Sky Lord commanded by Wing Commander Francois Audet, being repainted in the distinctive 5th fleet colours. An imposing and dour man, Audet was a ruthless fighter pilot in his youth and an intractable and deadly sky captain since fleeing France at the head of an entire air division, every man under his command defecting to the Covenant cause.

Audet’s decision to defect was for no love of the Covenant’s way of life. Indeed he finds much of its reckless need for discovery distasteful but not as distasteful as the what the Republique of France had become since Prussian oppression had set in. Sent to bomb civilian targets in Poland Audet instead took his airman South leaving France behind them. Although he knows his decision to be the righteous course of action he carries the burden of condemning those under his command to a lifetime exiled from their families, never able to return home to the country they loved and served.

To add further insult to injury, Audet and his airman are enemies of the French state with great bounties on their heads making the French military fight all the harder whenever he or the other defectors are identified in theatre.

Whereas Stone relishes the opportunity to bring the fight to his former nation, Audet regrets every French life he is forced to take in his duty as a commanding officer and a Wing Commander of the Covenant of Antarctica. This simple ideological difference was enough to make Audet distrust Stone and wary of his growing renowned within the Covenant. It was no accident that Audet and Captain Emile Rodin and their sky ships were assigned to Stone’s command and beyond professional courtesy the two men disliked each other immediately and in the short time serving as part of the 5th Fleet both Audet and Rodin have clashed with Stone on several occasion, usually over his overly aggressive tactics.

Indeed Stone seems quite intent on the destruction of the Apollo and the Sky Lord thrusting them into the thickest fighting but in reality his acute understanding of Covenant technology and the superlative tactics couple with the command ability of his sky captains means that his air elements always win the day, albeit bloodied enough that they much rely on the rest of the fleet to tend to their wounds.

How long this flimsy and fractured relationship will last can only be guessed at but for now, at least, Audet and his airmen are helping win the 5th fleet greater victories and ironically Stone the fame that Audet so deeply detests.