That’s right sports fans, it’s time for Dreadball. Or as some may choose to call it…Blood Bowl in Space. Or Speedball 3…

Never let it be said that Mantic are afraid of running with a good idea. But seeing as Jake Thornton penned this particular game it rather seems like he ran out of GW HQ with it and hoped no one would notice. Something Mantic seem to be making a habit of. Project Pandora, that I reviewed back in May last year, was a reworking of Space Hulk with non-brand Imperial Guard and Skaven in Space. Also written by Jake Thornton. But, to be fair, it was pretty good. 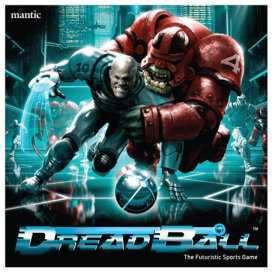 So what of Dreadball, the futuristic sports game? I have to admit that I was very much in the camp of people who thought it was Blood Bowl in Space. And seeing as there are Orks, sorry Orx, and Veer-myn, I and the rest of the camp can be forgiven.

However, where it differs is that Dreadball’s emphasis is more on the sport element rather than the krumping element. Some may see this as a bad thing but it’s actually not and I’ll explain more why in later. First of all; what do you get in the box?

Well a very pretty board, a deck of cards, some counters, some dice, two teams – human and Orx – some balls (ahem) and a very lovely looking rulebook. And why shouldn’t it be lovely considering it was the result of a very very successful Kickstart campaign. It’s something I’ve written about before and I won’t rant about it here, but Mantic clearly went to great lengths to either spend the money or make it look like they spent the money. The rulebook is very nice to look at. Gloss cover, silk pages, lots of lovely graphic design. But it’s badly written with typos all over the place, padded to shit – it could have easily been half the thickness – and doesn’t have useful things like a summary of play in it. I had to read the rules twice to fully understand them and there aren’t that many of them. This is very poor form considering Mantic raised over £450,000 from a £12,000 Kickstart.

The models equally are the half way house between economy of production and quality. The human models are actually really cool, I like them a lot. All three of them. Because all you get is multiples. The Orx are a bit poor and again there is only 3 unique designs. For the cost of the game and the fact that it had the investment it did I really do feel Mantic could have done more. That said, they’re not bad-looking and the simplistic design means that even unpainted you can identify the player classes at a glance.

Those gripes aside I absolutely bloody love Dreadball. No really.

It’s so joyously tactical and fast paced. And once you wrap your head around the two principles that 1. it isn’t always about manging people in the face and 2. you need to lay up your plays so they come off a Rush or two down the road then you’ll love it. Speaking of Rushes – which are basically turns – you only get 7 a piece which means the game can be over a bit quick. It’s not necessarily a bad thing as it means you can get a couple of games in of an evening.

Actions are limited to 5 per Rush and, depending on which player you activate those actions vary. Equally, as those actions are performed modifiers add or subtract dice without modifying the dice roll. Both very effectively represent the speed with which the action is unfolding in the thrilling world of Dreadball.

The other nice touch is scoring. It’s the first to 7 points, but it’s worked out by points difference rather than a conventional score. It means that victory can be snatched from your grasp by a cunning and daring play, dragging a points difference of, say +6 to +3 at a crucial point meaning you have to rebuild your lead all over again. And because the ball is fired from the centre line straight after a Strike is scored teams that over extend can find themselves flat-footed and racing to regain the initiative. As I say, it’s very very tactical.

As I mentioned, the manging is not the focus of the game – it’s far more akin to real life American Football where ‘Slams’ are like blocks in that they’re designed to knock down or otherwise prevent your opponent’s players from preventing your team from making a play for the Slam Hexes. That’s not to say that manging doesn’t occur but it’s quite hard to pull off. But at least you can commit a healthy variety of fouls to keep things interesting. Including distracting the utterly pointless Ref model. Which you can move about the board but it feels like busy work. And during a play test we just didn’t bother and it had very little impact on the game.

For all my misgivings about Mantic using Kickstart and the cut corners in production the game is brilliant fun. It’s slick and, once you decipher the rules, is huge amounts of fun to play. The book also includes rules for leagues, new abilities, MVPs and, rather coolly  corporate sponsors so it has genuine replay value.

Mantic gets a lot a lot of flack for the obvious parallels between their products and those of other developers, some of it well deserved, however Dreadball is a very different animal from Blood Bowl and if I’m honest, I prefer it. It’s awesome.

12 thoughts on “Dreadball – A Review”