Following on from my review of Codex Dark Angels a few days ago I thought I’d follow it up with a kit that has got more than a few people yapping. I refer to, of course, the Deathwing Terminator box… 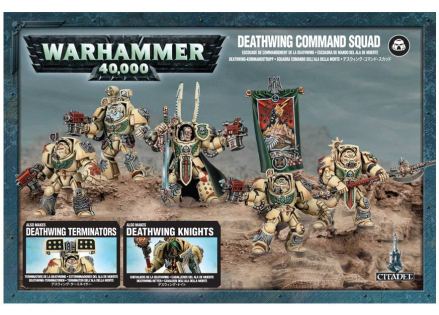 Now the first thing is that the box gives you enough plastic to make either a Deathwing Command Squad, a Deathwing Terminator Squad or the new, shiny, and the much lusted after Deathwing Knights. That’s three sprues crammed with lots and lots of bits and pieces. That includes two lots of shoulder pads, two lots of torso front halves and lots of weapons and very shiny command squad components including a 3D banner.

Now if you’re the sort of gamer that likes to keep their models simple then the Dark Angels and especially the Deathwing may not be for you. Every surface is crammed with detail. Wings, cloaked figures and swords litter every surface. Even the barrel recesses of the assault cannon have Deathwing swords.

There will be those that don’t like this seemingly limitless upchuck of Imperial and Dark Angel iconography but it is canonical as the Dark Angels are all about demonstrating their loyalty to the Imperium, all the while hunting down the traitorous brethren. Even the exhaust vents on the back half of the bodies have intrados like church windows. And, I have to be honest, it’s those simple touches that go a long way to making the Deathwing kit awesome. Aside from all the overt awesome features.

You also get a healthy range of weapons which are equally decorated and due to the flexibility of the kit the storm bolters, for the first time, aren’t attached to arms. This does mean, should the mood so take you, you can have your Deathwing Terminators looking pretty gangsta.

It’s hard not to marvel (and be slightly overwhelmed) by the sheer amount of detail on each of the components. Yes it may be a little over the top in places. In others it’s ludicrously over the top. But every component was sculpted by someone who embraced what it means to be a Dark Angel and a member of the Deathwing. There’s also lots of nice little touches that suggest that these suits of Terminator armour were some of the first of their kind possessing design features that hark back to the Horus Heresy or just after. This is an extremely cool touch. Apart from the studs on the groinal area is a bit much though.

There is, however, a bit of a design fault. The back half of the torso is the part of the model where the shoulder mounts go atop, which you glue the arms of your choice to the Terminator. The arms on the standard Terminators have a recess that allows you to, essentially, slide on the arm which ensures a good bond and keeps the arms nice and close to the body. With the Deathwing, however,  the raised are on the back half is there but the recess on the arms isn’t. They’re flat which means there’s a gap.

There’s also nothing to stop the arm from slipping out-of-place. This is not only going to add to build time as you’ll have to make sure the arm is set before moving on, but will most likely lead to mistakes, especially if you’re the kind of gamer who just likes to get em built and get em on the board. In fact, if you look at the images above, and the one below.

It just makes the Deathwing look a bit…slopey shouldered. This could be how they’ve been built but it proves the point that unless you get the positioning exactly right or trim down the raised parts of the torso. The shoulders themselves are also wider than normal so, once the pauldrons are stuck on they appear blockier than they otherwise should. However I rather feel like the arms were designed for the Deathwing Knights as the bulkier bodies means they need slightly wider arms so the shoulder pads don’t get in the way. Plus they’re far less noticeable for the same reason. 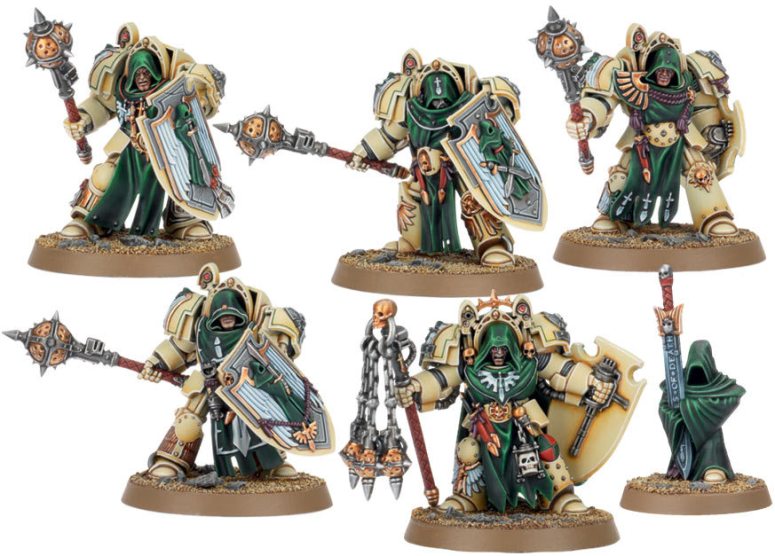 The Deathwing Knights have gotten a lot of attention within the community because they’re a new unit, with new rules and big sticks of smiting. They also look fucking awesome. If the monastic aspect of the Dark Angels wasn’t apparent enough, it is with these bad boys. They all look hard as nails with the aforementioned sticks of smiting – which is probably the coolest weapon I’ve seen in a while – and their flashy storm shields. The cowled heads are immense, especially the dude with the Osmotic Gill, and add a touch of menace. Except for the Knight Master, he looks a little daft, but that’s as much to do with the pose.

The big fat downside to the kit – and specifically the Deathwing Knights – is that the flexibility has come at the cost of versatility. You can only have your Deathwing Knights in one pose – slight moving of arms up and down aside – because the heads are attached to the bodies and the bodies don’t allow for any repositioning because the tabards get in the way. The result will be that if you choose to take more than 5 in an army they’ll be looking near identical. Admittedly there’s only so much variety with other plastic Terminators but I’ve got 55 in my Ultramarines army and I’ve managed to make them all look different, albeit slightly. Plus, you only get 4 maces in a Deathwing box which means if you choose to take a squad of 10 you’ll have to do a conversion because you can’t take two flails of absolution. Not being funny or anything but that was a bit thick of the Games Workshop. Plus everyone’s Deathwing Knight squads are going to look roughly identical, which is a bit of a shame.

Personally, if money was no object for them as a business and me as a customer I would have liked to have seen the Deathwing Squad as one box and the Command/Deathwing Knight squad as another. I think it would have allowed for far more diverse kits with the iconography ramping up depending on how senior the members of the Deathwing are. It’d also leave room enough on the sprues for a sufficient number of weapons and a bit more flexibility. Weirdly, by cramming so much in they’ve made them less multipart and more like push-togethers.

One thing I’m not entirely sold on is the Watcher that comes with the set. Now I understand that he’s to bear the perfidious relic into combat – which you’re mental not to take – but unless Mammas and Pappas survive to see the 41st millennium and are making suits of Power Armour Junior I really struggle to see why the model is sculpted with a power armoured foot poking out of the bottom.

Conversion wise, there’s a lot of potential. There are lots of options and spare odds and sods that can be used for other things. Lop off the arm of the plasma cannon and, with a little patience, you can convert it with a regular marine to spice up a tactical squad. And if you have the patience of a saint and the hands of a surgeon you can carefully scrape away all the iconography on the Knights and they would look awesome in a Black Templars army or, and this is where my thinking is, in a Chaos army. Especially for the likes of the Word Bearers, Thousand Sons and my (in development) Dark Knights.

It’s a great kit with lots of options. If you want Dark Angels but don’t want the bangles and baubles then get the standard boxes because they will put you off. There is a lot going on with these models. Personally, as I’ve always been a…ahem…closet Dark Angels fan I’m not afraid of it. The models are brilliant and capture a lot of the theatre that made the Blood Angels Terminators in the Space Hulk box so good.

The Deathwing box is available from Firestorm Games priced £31.50.