My third review on Dreadball, by Mantic, I decided that as the Skaven in Space got some love, then the Dwarves in Space, aka the Squats  Forge Fathers, should get the same. 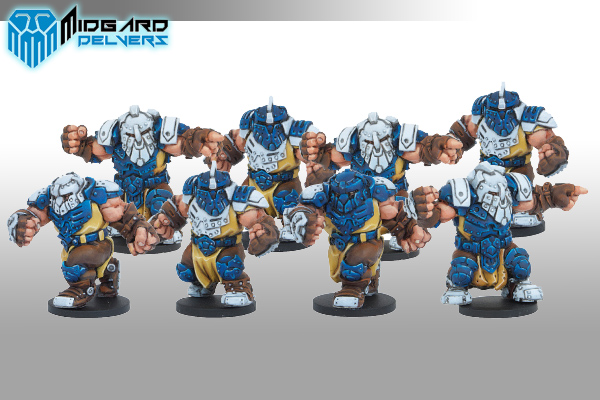 I refer, of course, to the Midgard Delvers. Which sounds like a gay bar near an airport somewhere.

I’m pleased to say that my enthusiasm for the game hasn’t dwindled with repeat playing and with each game I decipher the shonky rules a little better to the point that I pretty much know what I’m doing. This is a good thing. I’ve discovered though, without MVPs to spice things up the teams are a little bit restrictive in the way they play. Or, at least, without making life hard for yourself.

This isn’t necessarily a bad thing. As depending on the opposition it will make for some extremely violent/quick and therefore fun games, I guess the lesson is; play to your strengths. Or hire the people who have others.

But on to the Forge Fathers.

These models are cool. They’re imposing and dynamically posed. Obviously, as with all the other Dreadball teams, there’s only 3 models repeated but it’s one of those things that you’ll just have to accept if you want to play Dreadball and don’t want to convert your entire team. Space Marines (pause for trade mark jokes) minus the shoulder pads and guns have been floated as an alternative to the human team.

I think the thing that makes the Forge Fathers work, like the humans, is that the players are enclosed in armour. They don’t have any facial features so similar or identical models don’t impact quite so much as it does with the Marauders and Veer-myn. The Forge Fathers do look like they’re going to kick seven shades of silly and then walk the ball to the hole.

The Forge Fathers kind of feel like the end result of lessons learned with the other teams, especially some of the woeful poses and shonky plugin arms. The Striker models have a separate leg just like those of the Veer-myn but unlike the Veer-myn they slot together quite nicely. The pose is a little weird – like they’re tip-toeing almost – but that could just be me. Some of the hands come on sprues but I’m not clear why but I suppose there’s something to be said for variety. Shame it’s more of a token than actual variety.

Cast wise they’re also the best I’ve seen from the range with the bits of flash not in stupid places which makes a positive change and certainly makes it quicker to build. Thrown in very few, if any mould lines, and sensible design and they’re nice and quick to build. Huzzah.

In game terms, as one would expect of any Dwarf model from any IP, they are stocky, broad, armoured like a tank and look like they can hit as hard as one. These guys are nasty in fight, but slow. Both the Guards and Jacks will beat the living shit out of anything they’re allowed to reach with a strength of 3+. They can form a fighting wedge that’ll allow their utterly clumsy strikers get to a strike zone. If a Forge Father finds themselves in a position where they have to evade, dodge or dash it will end very very badly with a speed roll of 5+.

It rather suggests that the way to win with Forge Fathers is to present a solid wall of muscle and armour along the touch-line and once the ball is in play, pound the living daylights out of any opposing team member that comes your way and then slowly push the line forward before dropping in a 4 point play on the final rush. It’s not subtle, it utterly lacks finesse but the Forge Fathers don’t strike me as a bunch that would really give a toss one way or the other providing they walked away with the win.

Interestingly Forge Fathers are the team that you’d really have to play to your strengths with. At the rate at which they’d mang faces the likes of the Veer-myn would need to cheat left right and centre to stand a hope in hell’s chance of beating them. Legging it and hoping for the best would be…unpleasant. That said, as soon as you were able to buckle or break the Forge Father line you could easily out pace them.

The Forge Father’s represent a challenging but exciting team to use in Dreadball. The models look cool and go together well. The faceless nature of them makes the team feel less like duplicates and more like uniformed team mates which only helps with the duplication of models issue. And actually just kinda makes them look nails.

The Midgard Delvers are available from Firestorm Games priced 13.49.