Well, news to me at any rate…

You may remember back in December I posted the announcement trailer of yet another Space Hulk video game. I was quite unkind about it. And for good reason as the track record for the Space Hulk video game franchise is not a good one. And, to be honest, looking at what Full Control has punted out these last few years I’m not coloured impressed. This could be me being overly critical of the mobile games market. I could have my standards set too high. But maybe they should be set high as the whole point of having something as sophisticated as a smartphone with an HD screen in my pocket is that shit should look good on it.

But on to Space Hulk. As it has been a while since I heard anything about the game I thought I’d do some scouting about to see if there was any news. Aside from this screen grab below there wasn’t really anything coming from Full Control themselves. 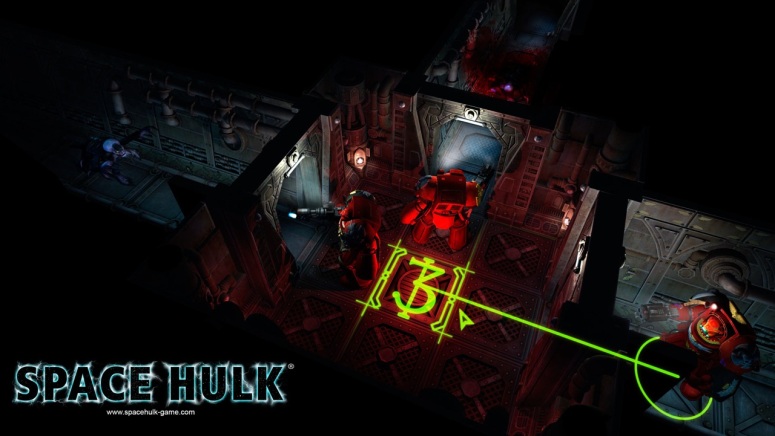 To be fair, it looks a lot better than I thought it would. But that’s not saying much. If the game was nothing more, upon download, than a photograph of a semen stained serviette with a Blood Angels terminator drawn on it in Biro, it would have been better than I expected. Harsh? Yes. But only because I’m bored with video games companies thinking they know how to make games better than wargaming and board games companies. That’s not to say that there isn’t room for a first person Space Hulk shooter, but it’s logic engine shouldn’t be built on a turn based strategy board game.

Anyway. It doesn’t look bad. And, whilst browsing the interwebs I came across a Gamespot video put up back in March which demos the game. Although rough around the edges it is, amazingly, showing promise. Be warned it’s 15 minutes long.

It’s still a work in progress quite clearly as the legs of the terminators don’t move for a start. But at least it feels like a Space Hulk game. It’s dark, it’s gritty and the developers seem to understand the aesthetic of the universe far better than any before them. Although my worry is that they’ll just end up building maps that are basically bits and bobs robbed from the plastic building kits.

The action cam feature is a nice touch providing the graphics are up to scratch otherwise it’ll just be a continual reminder that the boardgame sat under your bed gathering dust is vastly superior and that you should be ashamed for buying a digital knock off.

They were about half way through development in March so we should be seeing Space Hulk ship in the next couple of months. Needless to say I will be reviewing it…