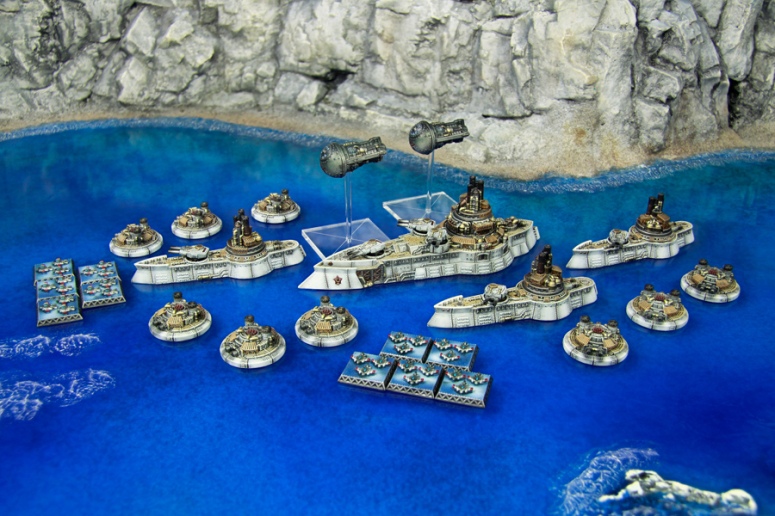 As it’s been a while since I looked at something from Spartan I thought I’d take a look at the Russian Coalition starter set because, well, I think they look ace. And ace they are. Weirdly, for me, the tiny flyers are a stand out favourite. They’re just a very cool looking plane. Equally the rest of the ships  ooze that perfect balance of steampunk technology and the bludgeoning, relentless design aesthetic we’ve come to expect from anything Russian. So the hulls are very sleek and sharp but with ablative armour welded all over the place and the crudity of heavy industry evident along its flanks guns, bridge and engine room with dirty great smoke stacks, ugly piping, corrugated steel roofs and boilers on the outside. It’s a fantastic contrast which is carried through to the gun turrets which are much the same.

You’ll also notice that the frigates are round. Based on the poorly designed and ill-fated Popovkas the design is amusingly similar which rather suggests it would have the same catastrophic tendency to catch fire, spin itself around when firing its guns or otherwise just be a bloody nightmare to move or keep afloat. They’re very much a Marmite model and if I’m honest, I kind of like it. Unlike the bombers which look like, if I’m brutally honest, a steampunk fleshlight. And I suppose Sputnik. You can add your own jokes there.

Like other Spartan models the detail is very good and cast well, although not quite to their usual standards as I had a couple of tiny flyers that were miscast. Still usable but still. The larger ships had a bit of flash here and there but it was nothing to worry about and those models that require assembly all go together seamlessly. Which is nice.

As with all the non-core fleets, the starter set comes with a booklet containing a bit of background and the fleet list. I’ve always been a bit sceptical about Spartan’s ability to write fluff. It’s always felt a bit all over the placed and cobbled together because their focus has always been the models. The Russian background however was rather well done. It set the scene well, and read much like a Codex or Army Book. High praise indeed. Well almost. Just as it was getting good they decided to spoon feed us why Russia was at war with certain nations which thoroughly ruined the flow and feel of the background. But as it was at the end it could have been much worse.

But what of the ships themselves? Well, at first glance they look horrid. They’re not not horrid mind, but they’re not the unstoppable vessels of slaughter one might assume. Their guns throw out a lot of dice but only in range bands 1 & 2 but the sheer weight of fire will mean that if anything is unlucky enough to get caught will be tin foil and match wood before you can say ‘by Jove!’. The obvious response would be to soften them up at range or hammer them with torpedoes or rockets. Well no. Because the other thing the Russians have is special rules and generators ups the arse. Pages of the blessed things. It rather highlights the limitation of the mechanic if this many special rules are needed to make the faction different.

The Russians get generators to inhibit missile attacks, generators to inhibit torpedo attacks and, just to be cheeky, a generator that allows you to mimic the effects of another generator nearby. Oh and they have a glacier generator just coz. Throw in ablative armour that raises its damage rating to be the same as its critical rating until it sustains that first level of damage and Russian ships are unpleasantly tough nuts to crack using the obvious tactics of keep your distance and chip away at them, because it just won’t work. Which is rather bad news for the FSA.

They are, however, slow and not quite as tough would first appear. They have lower than average critical ratings and utterly shite ack and concussion charges. Againt, the obvious tactic of chipping away with rockets and torpedoes would have rather limited success considering the generators but they’d get absolutely battered by a strong air force. I can also see fleets like the Covenant and French making life unpleasant for them with particle cannons and thermal lances, providing they can get close enough, but their respective generators should give them a degree of protection and the redoubtable special rule for the French would help further still.

Equally their chunky broadsides and fairly decent fire arcs means that outflanking isn’t so straight forward either. However, if a Prussian flotilla were to bide its time and draw the Russians in they could easily get behind them and be able to harass them with impunity. And that’s where the Russians are vulnerable if they don’t keep their formations. The gung-ho, all guns blazing, approach won’t work despite their incredibly short-range.

The Russians are a nasty fleet, especially for the points. They’re hard to hurt and hard to handle when they close to range. They do, however, have easily exploitable weaknesses if your opponent knows their fleet and compared to other fleets they are horribly under armed. Only the weight of shots they can chuck out evens it up, although the ablative armour is perhaps over egging the pudding somewhat. But equally there are ways round that too.

I’m pleasantly surprised by how the Russians play. I honestly expected them to be a crude, cheap, and explosively violent fleet but actually it’s very considered that attempts to provoke its enemies. Then it becomes explosively violent. Interestingly I can see the Russians being good for beginners because they are, essentially, straight forward to use, but an experienced gamer would also enjoy the challenge they represent, particularly when it comes to all the rules.