Followers on Twitter will know that I got rather excited by the A Tale of Two Armies. So much so that I went out during my lunch hour and bought the Chaos Lord on foot so I’d have a nice army general ahead of the fun and games of putting together the first 500 points (army lists to follow). And this was also before I’d got my hands on the army book. So it’s fair to say that I was a bit keen…

I opted for the Lord on foot because it occurred to me that I wouldn’t need a mounted lord until my army was knocking on the door of 1500 points or possibly even 2000. Plus the plastic model is really quite cool and gave me the luxury of painting something man-sized that wouldn’t mean too much money wasted if I totally ruined it. 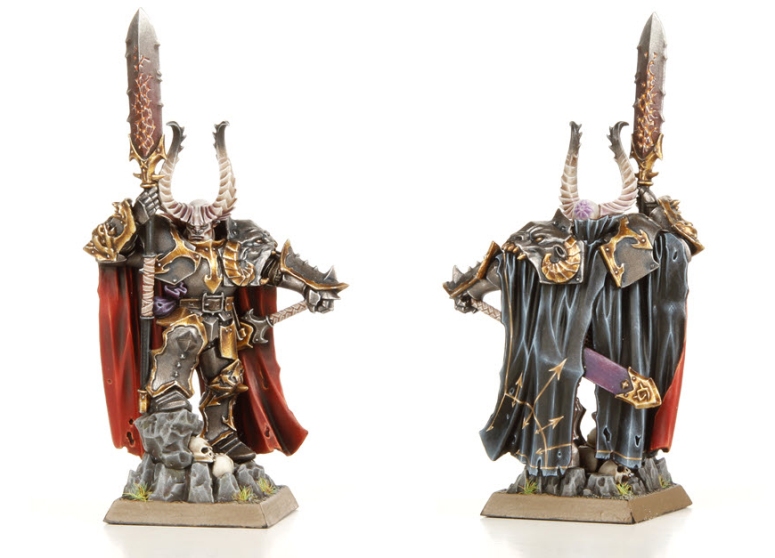 There’s an awful lot of controversy about the growing number of plastic character models that have been coming these last few years. It started off as a multipart plastic Space Marine captain for £12 and everyone went mental. Then the plastic lord sets for Empire, Orcs, and High Elves which have stayed at a fairly reasonable £18 for two blokes – one mounted, one on foot – which everyone quite liked despite the limited poses. But as armies have come out single character models have been released for comparatively high prices.

So what do you get for your money aside from a character made of plastic? Well he’s a fair old size, helped along by the handy piece of rock he’s perched on top of, and that’s discounting the thoroughly badass spear and the thoroughly Pans Labyrinth horns growing from his head.

It’s a brilliant model. Aside from looking fantastic and being cast all but perfectly, it’s very cleverly designed so everything slots together seamlessly without any horrid gaps that some of the newer plastic kits have been guilty of. He was clipped, cleaned glued and undercoated in the space of an hour which is pretty good going.

And that included the time to swap out the head. Yes, I swapped the head. I have nothing against the head the model comes with. It’s perfectly fine, and I think the slightly bovine features is an inspired touch along with horns that actually look like they may have grown over time. It just doesn’t work with what I’m doing with the narrative of A Tale of Two Armies. So I acquired a Chaos Warrior head (thanks Lee) and with some tinkering discovered that repositioning the head to be looking to the side completely changed the look and feel of the model. 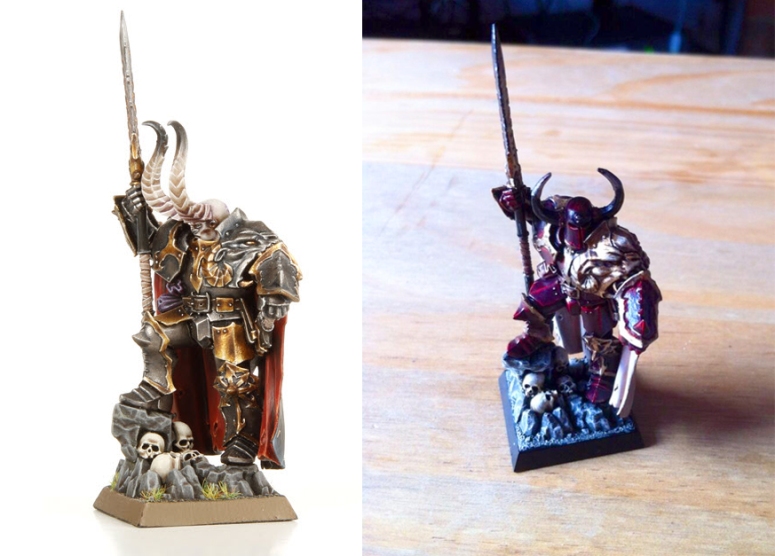 The standard pose exudes almost a thuggishness that works brilliantly well and one can imagine him gradually building up to a relentless charge with horns lowered. By turning the head it just makes the model seem like violence is much more immanent and going to be personally much more unpleasant.  Both versions give the impression of an unpleasant end, they just come at it from a different point of view. Which suits me fie.

And actually highlights one of the best things about plastic kits – they’re so easy to convert. Just a head swap totally changed the look of the model. Imagine what a change or armament would do. And on top of it all, the basic model that you have to work with looks so cool. Some careful snipping could see the torso mounted on the legs of Chaos Knight model as an alternative to the current mounted lord. Not cheap mind, but our hobby isn’t so crap or get off the pot.

The armour is incredibly detailed and thanks to the plastic it’s crisply cast, easy to see and easy to paint. Nothing feels half done or bodged like it can do with the likes of the, now old, Space Marine tactical squad. Everything feels very deliberate and has none of the unpleasant angular look that has dogged some of the newer plastics. I especially like the cloak and how it’s split with the chuffing massive sword sticking out the back. Which goes nicely with the chuffing massive spear. Which is chuffing massive. And has the coolest blade ever. And, again, because the detail is so crisp it’s very straight forward to paint. Which means it’s fun to paint. Like the rest of the model. And with none of the faff that cleaning metal characters came with in the old days.

In game terms a Chaos Lord doesn’t get much nastier. A stat line that makes a Vampire Lord nervous, a menagerie of creatures to sit atop – although we’ll not talk about those here – and a hand dandy selection of magical items too. Although the mutations available does make him proper bonkers. 5 points to cause fear? Don’t mind if I do. Or Soul Feeder for 10 points which allows the model to regain a wound for each wound inflicted. I’m sorry but that’s mad. And that’s on top of the magic items. It does mean of course that the average lord will rock up at least 250 points and it’ll still get its face blown off by a cannon.  Still, if I were to let that happen I’d kinda deserve it.

The plastic Chaos Lord on foot is a superb model. The armour is well thought out and I love the vambraces that protrude out beyond the gauntlets which will puncture faces long before the fists make contact. Which is nice. The weapons are suitably exaggerated and the overall menace of the model is pretty much perfect. To lead my fledgling Khorne army it’s perfect and to (eventually) be demoted to a Hero leading the warrior regiments it’s justly so again.

The Chaos Lord on foot is available from Firestorm Games priced £13.50.

2 thoughts on “Chaos Lord on Foot – A Review”