2013 has been an exciting year for miniature wargame podcasts! The amount of shows that are available is simply staggering. Especially, once you realize that most of them bring their own unique flare and culture with them. I love the fact I can listen to 100 wargame podcasts and get a little something different each time. With that said though, I do notice a ton of problems and potential ways to improve, keep in mind I am equally as guilty and could take a taste of my own medicine…

An aspect of how people quickly decode incoming information from our environment, is by stereotyping. It might seem shallow, but everyone, everywhere in some manner does. It’s a natural process that allows us to quickly group important information from otherwise tons of useless data points. Where it goes wrong in most situations is when stereotyping is used as an excuse to label someone else, thereby turning that diverse person into a 2D character.

In the context of a podcast, the host’s will have certain bias or opinions that attract or repulse people from the show. After an audience has listened to a few shows they are able to move past the “first impression” stage and get to understand the host’s perspective by comparing it to their own. This is the ideal situation and for the most part it’s what I see on the majority shows.

Where does it go wrong though? Basically when the stereotype becomes the entire show. The host’s create a falsehood about who they are as people and default on “what’s the popular opinion this week”. There have been a few instances of fake people who think about themselves first before that of their own audience. When a poor man or woman listens to your show every week because it is the highlight of their day, show some respect, don’t lie to them about who you are as a person. Be yourself, that’s why we are listening after all.

2) Will be right back after 10 commercials.

OK this is a bit harder to explain. Basically I am ok with sponsors and people who want to support your show. What an honour it is to have someone respect you; to the point where your show is considered valuable in the sponsor’s own eyes. The commercials on the Garagehammer podcast are simply brilliant and clever. They don’t take you out of the experience and help to build a sense of weight to the show.

Where a commercial or a badly placed music break can hurt a show is in the pacing. Typically, breaks should be thoughtful and not there for the sake of “just being there”. For instance, if I reviewed a 40K codex and broke it down by section (with a break between each) things can get really hectic in a hurry. Troops might take longer to discuss, so spend the time and then take the break, but if Heavy support and fast attack are shorter, please combine them. Here’s my general format for pacing.

Less than 1/2 hourr: it’s okay to have some funny breaks or commercials, have a gander! Example: Big Mek’s Garage Podcast

1 hour long show: No Breaks, keep it focused and to the point, you will find that time runs out rather quickly so try to use it as best you can. The type of topics discussed at this format require additional explanation and breaks just hamper the show as a whole when, compared to the other levels. Positive Example: Jadedgamercast

2 hours or more: Now this is the most difficult, because this really depends on the hosts for the most part. If you’re the kind of host that needs to take a moment to eat or go to the can, then feel free to add a break or 2. If your show has multiple hosts, a break might not be needed, because it gives the other hosts a moment to shine front and centre. Just be aware of the topics being discussed and try not to talk about one specific area for longer then 1 hour.

Three hours of “why Finecast is: (insert your own pun, reader)” is entertaining, but only for a max of 1 hour.

3) We are Competitive! Are you competitive?

Now this refers more to my own personal bias, after listening to 6 months worth of shows….Basically a lot of shows start-up out of the need and desire to express the competitive nature of the game that they love. It’s what drives tournament circuits and tactical discussions around the world. I am a competitive casual gamer. I LOVE taking my constructed army of badasses against your random net list, Come at me Bro! 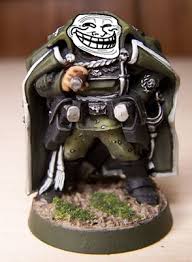 But it’s also important to understand that there is a time and place for competitive behaviour (at a tournament or progression league). A thematic campaign or event that relies on goofy missions or the ability to purchase re-rolls with real cash (fundraisers like Foodmachine) in these situations a competitive player needs to “take a chill pill” and realize that it’s about why we are playing and not just about winning.

I find competitive tournament podcasts interesting and insightful. However, they can risk becoming unengaging if they rely too much on reading off a battle report or army list. All too often, the host never explains or highlights why a unit is useful (how it combos within a list) or describes what drove them to make the choices that they would eventually end up with. Why is a unit of 14 chaos warriors amazing? What does that unit hate to come across during a game. To become a better player there needs to be that sense of self-reflection, otherwise its pointless filler information. Same goes for battle reports, their needs to be a reason for us to get invested. Create theme around your list or name a funny model like “Gimpy the Hormagaunt” which has a unique history during game. Your telling us a story(battle report) make it interesting! This is usually why I find Blood Bowl Battle Reports generally more interesting (Frank the Crank, smashed into the opposing Orc line and actually ended up taking out the Strength 5 Captain Black Orc) and engaging versus a generic Warmachine battle report. For example: ” I moved forward, shot a bunch, I feated with the caster and won the game”.

GIVE US A REASON TO CARE!!! UNLESS! Exception to the rule, you keep it short and to the point. In that case, feel free to quickly cover the Battle report.

Like I have said previously, I don”t dislike competitive podcasts, the main issue that usually comes up is when there are multiple competitive shows that repeat the same information (same events as well). This is unavoidable, but going back to the beginning “Be Yourself and be original”. Put a unique spin on it! Try a Codex review drinking game or explain why an event is unique enough and worth the listener’s time.

Thanks for all the fish!!

I hope you have enjoyed and have taken something positive away from this article.