Following on from my review of the Troglodyte starter set for Godslayer by Megalith Games, I’ve been lucky enough to get my hands on some of the new Banebrood Reavers. Because I’m just that lucky. And I nag the guys at Megalith. A lot. But they’re good sports and let me have a few ahead of release. 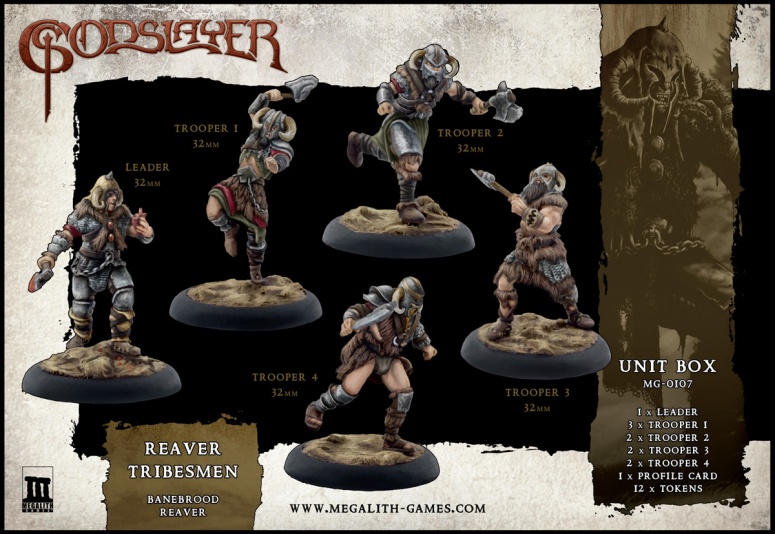 The Banebrood, just so everyone’s on the same page, are, well, savages. A civilisation, if the term can be used, of bestial creatures and twisted men all of whom would be very much at home in the annals of myth and horror. Maybe Pans Labyrinth. Only scarier. When I first stumbled across Godslayer I was struck by how interested I was in all the factions/forces/armies/whatever. The Banebrood starter set looked like they were lifted from the pages of Greek myth. Which is cool. But the contrast between them and the Reavers just goes to show the effort Megalith went to in designing the force.

Whereas the Gorelord and Mongrels are little more than animals, the Reavers are mere shadows of men. They are the legend of Norse raiders taken to an absolute and uncompromising extreme. Cannibals and barbarians to a man, they descend upon their foes and quite literally tear them limb from limb…then sit down to a spot of lunch. If any shred of humanity still exists within these monsters it is buried beneath derangement, brutality and an insatiable hunger. Which is nice.

The models kind of remind me a bit of Chaos Marauders, only dynamic and not a bit crap. They also have a twist of Lord of the Rings about them, which is no bad thing, and the wizard from Monty Python’s: Quest for the Holy Grail… 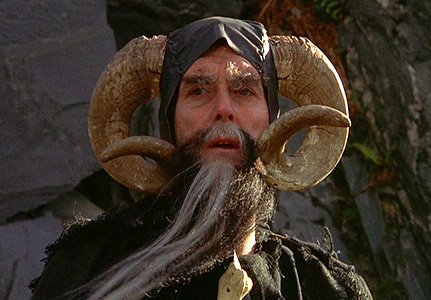 As I’ve come to expect from Godslayer, the level of detail is very good and the casting excellent. Me mindful of the axes hafts though, they are a little on the thin side and therefore bendy. And therefore breaky. Also the lack of variety with the poses will make painting them, I suspect, a tad wearing. But that’s the limitations of metal models and one we should all be use to by now. The leader clutching the heart is way cool though.

But the models are almost irrelevant because if you field Banebrood you’d use 2 pence coins with angry faces drawn on them if it meant your opponent would let you use Reavers. Because they’re bloody horrid. Yes, all right, they’re called Reavers so I shouldn’t be so surprised.

But between a respectable Melee of 5, and a Defense of 13 the Reavers aren’t too shabby on the fisty cuffs front. But what really makes them entertaining is the fact that they have the option of mobbing their opponent and sitting down to dinner. Which is brutal. And if that weren’t nasty enough they also get to regain lifepoints (wounds) thanks to the very useful sub-faction special rule called Heart Drinker. Which is nasty. And on top of that they get to juice their stats a bit with the Mob Mayhem special rule. Which isn’t the best named rule ever, but the result is very handy.

It all adds up to making them bloody hard to kill. When you consider, also, how hard they are to wound in the first place, and their ability for inserting axes in to places, the Reavers rather seem like a must have option for the Banebrood. The rub of course is that they’re not the cheapest models in the world but you do get 10 awesome looking metal blokes for the money rather than plastic or any such material.

The Reaver Tribesman box is available (currently to pre-order) from Firestorm Games priced £41.36.