As I slight change of gear for my ongoing adventures in the Warhammer World I have decided to take a look at the Lizardmen army book. The last time I gave the scaly denizens of Lustria any attention what-so-ever was back when they were in the Warhammer starter set opposite the Bretonnians. Back there and back then they were pretty impressive both as models and as a fighting force. They were also fresh and offered up new hobby challenges. Of course the main hobby challenge was that the models dated very quickly and the available range was tiny.

I’ve ignored the Lizardmen ever since to be honest. Even when the previous iteration came out and the shelves were flooded with Stargate toting Stegadons and massive massive Carnosaurs. But that was always my problem with the Lizardmen, interesting models, but the army list just didn’t pull my focus. 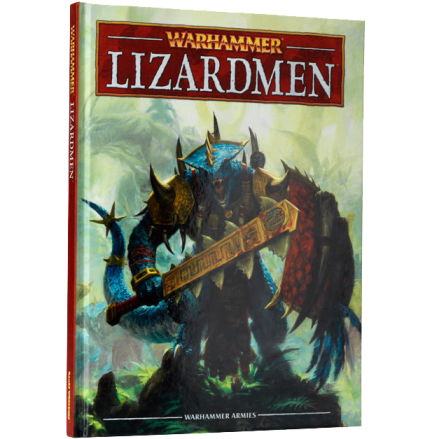 I’m not entirely sure what it was about the new book that did pull my focus as some of the newer models are a bit on the iffy side. But pulled it was and here I am writing about it. It helps that the book is gorgeous. As with all the new army books it feels premium, which is just as well considering the price, and it’s packed full of artwork and lots of lovely photos of the big fat scary (and scaly) kits you can now plough your money into.

So first thing’s first, the background is awesome. I mean really awesome. I’m reliably informed that nothing’s really changed from the previous book, but as I’ve not read that, it’s new to me. It’s just so well paced and compellingly written. And for the first time ever I feel like they have a place in the Warhammer World beyond giant lizards living in a jungle. All the stuff about Lizardmen culture and the role they have to play in the grand scheme of things is fascinating. Everything feels like it has a purpose now and it’s really interesting how elements of Lizardmen society is reflected throughout the Warhammer World, and the Lizardmen themselves possessing a slightly sinister undertone that belies the seeming nobility of their undertaking.

They’re a bunch of snakes in the grass basically. Sorry, couldn’t help myself.

But on to the army list. Which is sick. And I thought Warriors of Chaos were bad! If anyone bemoans Chaos and whinges that they’re too hard I’m just going to hit them over the head with the Lizardmen book until they give in, or their skull does, whichever happens first. Designed specifically to go up against Chaos, the Lizardmen army is incredibly difficult to deal with as all their weaknesses are offset. Shit initiative? That’s okay, you can have two wounds? Not good enough? Okay, well you can be cheaper than Chaos Warriors but on paper be just as good. Still not good enough? Okay, we’ll give some of your guys Predatory Fighter which gives you an extra attack for every 6 you roll in combat. Nasty.

Not good enough? Okay, how about being able to field 6 Stegaons in an army? Yes, 6. And I’ve double and triple checked that. And the mental thing is that it’s a viable, if rather wanky, army selection. But let’s be honest, who doesn’t find the idea of a herd – I think we can call 6 a herd – of Stegadons stampeding down the board a very appealing one?

Despite the woeful amount of variety in the core choices available to Lizardmen, the army list has crazy amounts of variety almost to the point that you can quite comfortably come up with an army variation to take on all comers with very little thought what-so-ever. That’s not to say they’re the easy option of the beginners army because they’re really not. To get the best out of your army requires a lot of planning and a fair amount of sacrifice as you won’t be able to fit all the cool stuff and if you try you’ll have an army that doesn’t quite work. Whilst the Games Workshop has done a sterling job of writing the army list to reflect the Lizardmen society it isn’t quite the harmonised hegemony of the Tau Empire so a combined arms army list won’t necessarily do you any favours.

That said when you’ve got fear causing flyers with armour-piercing & killing blow (I know right?!), chuffing great beasties that stomp the shit out of everything and magic up the whazoo it’s hard not to want to take everything.

Although, rather refreshingly, you don’t have to make the Slann, magic and magic items your first port of call despite it being the obvious one. The army is plenty enough brawn to hold its own with a balance of Saurus, beasties and Skinks harrying flanks to even need to touch magic. Although there’s plenty about those three sections that will get you hot and hard. Unless you’re going up against it then you’re manliness will shrivel to the size of a press stud. Because it’s horrid. But don’t kid yourself, the spells are immense. And Slann can channel magic through one another allowing the exchange of spells. Which can be extremely bloody handy, turning magic missiles into mobile artillery and affording vulnerable units sudden and well-timed magical protection.

Some of the magic items available to the Lizardmen are a little bit mad. And not all that dear either. For 40 points you can equip the Sacred Stegadon Helm of Itza which not only gives +1 Armour and +1 Toughness it gives you D3 impact hits. My personal favourite, however, is the Horn of Kygor which, for 35 points, gives all monsters in the army – which includes monstrous cavalry, mounts, chariot beasts etc – Frenzy for a turn. If timed right, and considering the nature of the army, that’s a lot of dice being rolled for a very low-cost. There’s other tasty stuff in there like the Blade of Realities which ignores all saves but at 100 points I’d struggle to justify spending that.

The Lizardmen book is a superb read. The army is a little much in places to the point I’d feel as embarrassed fielding them as I would Warriors of Chaos. That said they are an interesting and exciting army to field with an equally rich model range – slightly dated Saurus models aside. Although opponents would groan at the sheer volume of rampaging monsters the challenge lies in figuring out how to deal with them.

I never thought I’d find another Warhammer army that excites me as much as Warriors of Chaos does that’d I’d want to collect them but I’m happy on this occasion to be wrong. Now to tell the wife…