So what’s in the pack? Well a lot of packaging. Unnecessary amounts of packaging but that tracks with the core box and, by the looks of things, all the other expansions including the up coming Corellian Corvette. And once you hack your way in you get the model itself which is the average painted scale X-Wing which looks like it was dipped in Army Painter but it’s passable and immediately identifiable as an X-Wing so that’s fair enough. 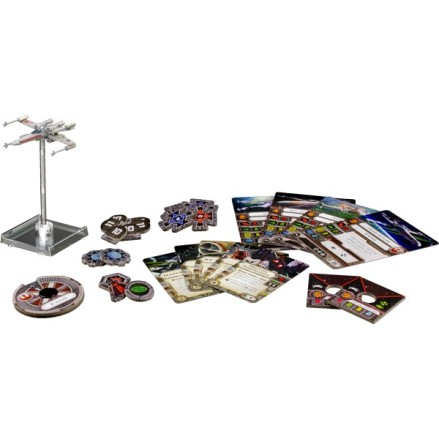 You also get the manoeuvre wheel, shield, lock-on, damage, stress and focus tokens, pilot cards, upgrade cards and the appropriate double-sided base markers for the pilots included.

Weirdly, for me, the exciting aspect of the X-Wing pack is the cards. And that’s a first. Because in the Expansion you get new pilots, upgrades and the like. Specifically you get Wedge Antilles. I didn’t realise this when I bought the pack (Mat I still owe you a tenner) and oh how I swooned when I looked through it all. Aside from Wedge being my absolute favourite Star Wars character – yes even over Han Solo and Boba Fett – he’s an absolute badass in the game. This has everything to do with his high initiative and special ability that reduces his targets agility by 1 which for a TIE fighter is incredibly bad news. Throw in the marksman upgrade for 3 points and it grants him the ability to turn focus results into hits. Every time he fires. That combination dramatically increases his lethality. And when you hit you hit big, as you’ll see in the upcoming battle report. He’s no more resilient or anything but he’s more likely to kill a TIE fighter in a single volley than even the likes Luke Skywalker.

The beauty of the expansion pack actually rests with the rules of the game itself as the profiles, upgrades and even the differences in turn wheel compared to other ship works so nicely. So when you’re bird-dogging TIE Fighters the sweep turns of the X-Wing are quite at odds with the sudden and aggressive turns made by their quarry. It really is an awesome game.

The rub is that for that single model you’ll be paying £10.79. And that’s more expensive than the Games Workshop. The new Witch Elves works out at £3.50 per model for more plastic. However remember two important things: 1) it’s a licensed Star Wars product which means Lucas Film/Disney want their taste and (2) A single X-Wing at £10.79 will make a much bigger difference to a game of X-Wing than the equivalent spend on most other models – not just Witch Elves – so it’s all relative I guess. Plus you don’t need to spend a butt load of money on X-Wing to enjoy it. And because you can play a good-sized game with just three models you can buy a model a month for a year, end up with a full squadron and not feel like you were robbed.

So, the X-Wing fighter expansion is brilliant because it makes the game better by owning it, which is a weird thing. The model is average and essentially what you’re paying for is bits of card with cool things printed on them, but that’s fine because average painted or not, there are few sights sweeter than forming up a combat flight of X-Wings on a board.

The X-Wing fighter expansion is available from Firestorm Games priced £10.79.