A slightly different tack for me for this X-Wing ship review. I’m going Imperial. But just this once. I’m Imperial-curious I guess you could say. And for my dabble in the Dark Side I’ll be looking at the iconic and epically cool Lambda Class Shuttle. 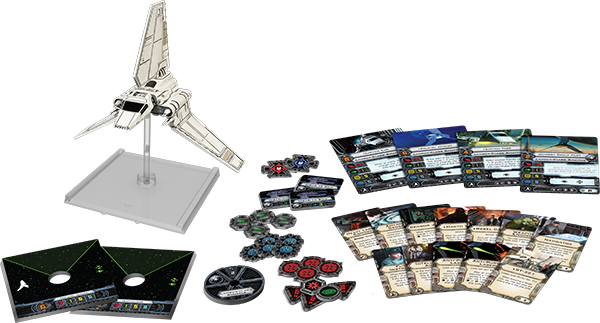 First: the model. Which is, even by the gaming standard pre-paint jobs that Fantasy Flight churn out, not awesome. Admittedly there’s not a lot you can do with a grey ship with lots of flat surfaces but visible brush strokes are a little much. The model itself though is way cool and I love the fact that the wings move. As arguably there will never be a situation when the wings will be folded up they didn’t have to design the model with movable wings so it’s kind cool that they did.

And that’s really the point of the Lambda Class. It’s just cool. It looks bad ass. It looks bad ass despite the average paint job and the alarmingly flimsy blaster cannons mounted on the wings. Those buggers will snap faster than someone with anger management issues at a twat convention.

In the game the Lambda Class Shuttle is a mess of contradictions. In terms of movement it is a slow, wallowing, turd of a ship that is quite at odds with the fast movers that make up the bulk of the Imperial fleet. This does mean it’ll need baby sitters like a teenager needs supervision at the magazine rack. That said, it’ll take some killing. With 5 shields and hull points it’s very solid and that makes it a problem for Rebels as their smaller numbers requires them to make clean kills and move on to the next one. Ten hits are a heck of a lot of punishment to have to dish out. Not to mention having to wade through all the other ships to get to the shuttle in the first place.

And it’s no slouch in a fight either with three shots and for 2 points it can take an anti-pursuit laser which means, much like the Firespray, you can only really catch it amidships. But for around 10 points less. However this fact does actually play to the Rebel’s strengths but providing you’ve not left the Lambda Class alone you should have a very meaty anchor unit in your fleet.

So the Lambda Class is a slow-moving, durable, weapons platform and a rally point. But that’s not all. Oh no. The pilots provide very useful advantages like taking on stress tokens or target locks which keeps you flimsier but faster fighter in the fight for longer. Colonel Jendon can assign his blue target lock action to another ship, presumably even if they can’t normally acquire it. Which for the likes of a TIE fighter is very useful indeed. Double that up with the ST-321 upgrade and you can acquire a target lock on any enemy on the board. Which, for an extra 3 points, is a lethal mix.

All the upgrades are a bit mental actually and none of them are over 3 points. Including being able to take Darth Vadar who gives you the opportunity to inflict a critical hit on a target in exchange for taking 2 points of damage. A two-edged sword but timed right and it could be decisive. Although the cheekiest card by a mile is the Rebel captive who inflicts a stress token on any Rebel ship firing on the user. Which is just horrendous and anyone using the Lambda Class without that card should probably have a slap. And, theoretically, on the basis that Rebel captives aren’t in that short supply, you can take one per shuttle.

And really that’s the Lambda Class Shuttle‘s strength: investing in sensible upgrades which dramatically increase the fleets longevity, allowing you to offset its weaknesses. And then take two.

I gameplay terms I’m not sure at which point you’d take a Lambda Class Shuttle over other elements. Especially now things like the TIE Defender is readily(isn) available. The unit buffs and upgrades are a strong lure but it’s slow speed forces you to change tactics and that’s worth considering. Points wise it’s embarrassingly cheap for what it gives you. TIE Defenders are the more expensive option and it’s only their aggression and tasty mix of Ion Cannons and Laser Cannons that makes them my first choice but in the right scenario a Lambda class is devastating. Especially anything that requires the Rebels to attack a specific point. The fact that the Lambda can actually come to a complete stop gives you floating bunkers and that’s terrifying.

The Lambda Class Shuttle is available from Firestorm Games priced £19.99.

One thought on “X-Wing Expansion: Lambda Class Shuttle – A Review”