It’s no secret that I’ve riding the green tide. It’s equally common knowledge that I’ve managed to cobble together 1,000 points already. None of it’s painted yet but that’s fine as the deal between myself, Mat & Lee is that we can’t progress past 1,000 points until it’s all painted. There’s an advantage to that though as it gives me time to get use to the army before it gets too big.

And one of my favourite parts of my budding Waaagh is the Stormboyz. What’s kinda fun for me, being part of the Old Guard, is I’ve had the luxury of watching these models change over the years and each time I thought ‘those are really cool’. They’ve just got better and better. And less fascist as well which is a good thing. 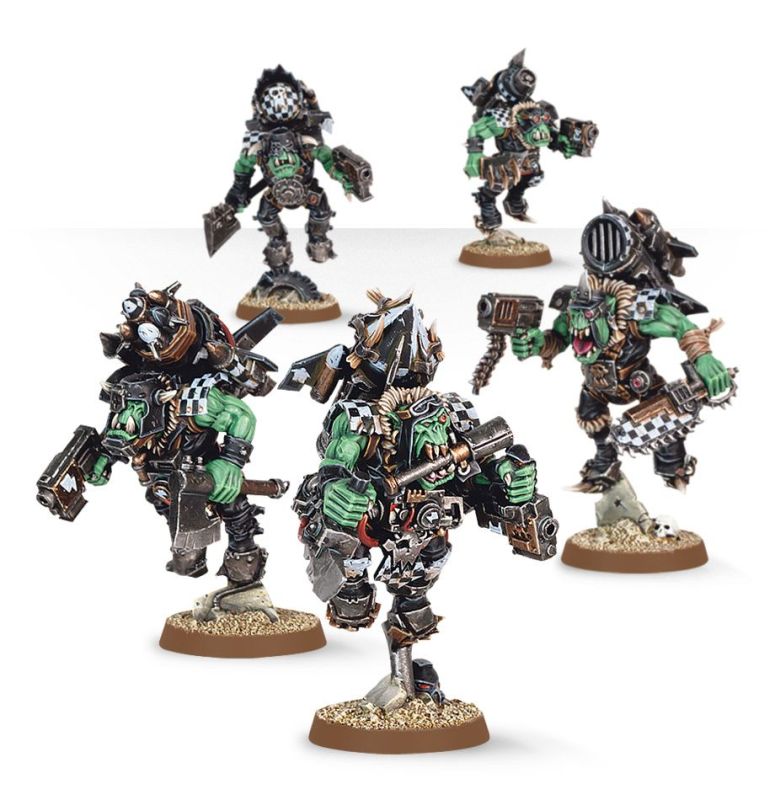 The thing that impresses me the most is the versatility of the kit. There are options enough that you can build 10 Stormboyz that all look different. Individuality in a horde army is rare so the luxury of coming up with different combinations is a bit of a treat. From the 10 I built my favourite is the Stormboy clutching stikbombz in both hands and one between his teeth. He looks completely mental.

I think what’s cool about the models is while the background points towards Stormboyz being disciplined and well-drilled, it’s still by Ork standards so they still have that shit kicker look that makes the Orks, as an army, look so cool. Instead of like the aforementioned fascists in grey jump suits ala the 2nd edition version. And they’re still Orks so they’re still giddy at the thought of unbridled death and destruction from above. And all that comes through on the models very well. Equally the rokkit packs are crude but have an elegant simplicity that – like the Dakkajet – points towards a barely understood higher knowledge of aerodynamics and the principles of sustained flight. The 3rd edition models had nothing more than an Acme rocket strapped to their back which would have achieved nothing more than firing its wearer high into the air only to plunge to their doom shortly after. Which, whilst funny, isn’t very believable even by 40k’s over stretched concept of the possible.

It also goes together very well. The legs and torso are attached so they’re far stronger than the older models, witch just the chest to attach. There’s also plenty of heads to choose from so you can mix and match between typical Ork heads of the zanier options like the ones shown above. Where possible opt for the zany ones. They’re just better. The only considerations when building the Stormboyz are:

Position the model towards the back of the base. Because the model is leaning forwards to simulate takeoff they’re very front heavy. Whilst this isn’t such a big problem as the old metal/plastic kits of yore they’ll still fall over and it’ll still be annoying.

The other is check all the rokkit pack parts fit together before you glue them. Whilst the vast majority are interchangeable, one or two aren’t and if it’s the last model you build in the squad you’ll be kicking yourself. Plus one or two of the nose cones will get in the way of one or two of the heads so glue that on last where possible.

Now there’s a few naysayers surrounding the use of Stormboyz primarily around their woeful armour save with no option to upgrade it. But I say this is a good thing because it encourages you to use them the way they were intended which is either with maximum aggression so you close the gap between your line and the enemy’s as quickly as possible, or you hold them back to act as a rapid response unit. Coupled with the fact that they’re relatively cheap compared to other jump infantry and they’re actually a pretty useful squad to have in the army.

Their high toughness will keep the Stormboyz safe from squishy targets like Imperial Guard when they make it in to contact, so the Ork’s low initiative isn’t so much of a problem. Against Space Marines it’s an entirely different matter but the sheer weight of attacks – and the aforementioned low-cost – will mean win or lose the Orks will always come out on top. In the game I played against Guard they made absolute mincemeat of everything they came into contact with and the addition of a Nob is brutal.

Of course that’s an ideal scenario. They were able to close rapidly and managed to avoid shooting or made it into cover when they couldn’t. The bottom line is they are very very vulnerable so there will be some games where they’ll be cut to ribbons before they do anything. How you use them so incredibly important. It’s kinda sucky from an investment point of view as a unit of 10 is the best part of £30.

If you can find ways to mitigate that all but pointless armour save then you have a very hard-hitting unit for naff all points. Time you attacks so they make contact with other elements of the army and Stormboyz have the potential to run roughshod thanks to the speed they have over their ground pounding counterparts. More so if you take a couple of units of 10.

Personally, I love the Stormboyz. The models are awesome and the best fun to build, just like the rest of the Ork models I’ve come across thus far. The level of customisation is pretty good and they just look the best when they’re built and all grouped together. They’re chunky though so be prepared for them to occupy a lot of space on the board – a bit of an issue for a horde army – and a lot of space in your figure case. But the bottom line is they’re great fun to use on the board.

One thought on “Ork Stormboyz – A Review”