Last Thursday I got a game of 40k in using my new Ork army. As it was their second outing I thought I’d mix it up a bit and give the Dakkajet a try because, well it’s freaking cool. For reasons passing my understanding, I told Lee I’d be taking a flyer which prompted him to tweak his army list to cram in a Strom Raven. I can’t blame him, I just wanted to be a sod and spend all game strafing him with impunity. 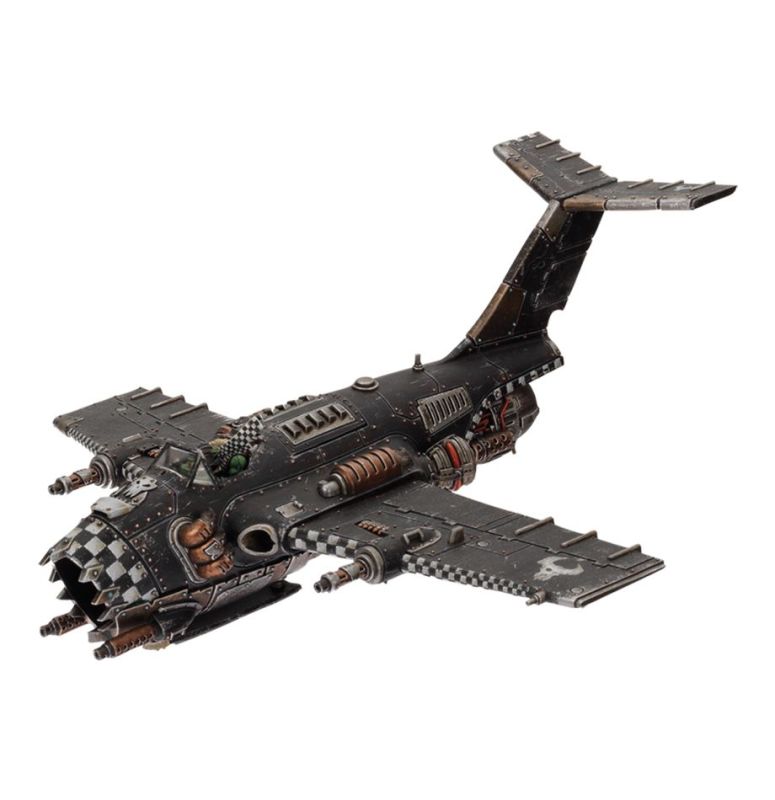 I was my usual jammy self and managed to get my Dakkajet on the board at the start of turn 2 and immediately set about hosing down an Imperial Guard squad. The Storm Raven came on the following turn and turned the sky around my Dakkajet into a swirling storm of explosions and hot lead in an attempt to turn the Howlin Git into a big cloud of tin foil and fire. But as I mentioned, I was jammy. Passing 6 out of the 7 Jink saves forced upon me resulted in me breaking off and attacking a second Guard section with the Raven in hot pursuit. The Dakkajet’s number as inevitably up but it struck me how (a) cinematic it all looked (b) how flyers didn’t break the game as I feared and (c) how introducing flyers is a natural evolution in army selection and encourages gamers to take ‘all comers’ lists rather than tailoring them to suit a specific force or army composition.

Lee had a tactical advantage in so much as I’d told him I was taking a flyer. However ‘best practice’ as it were suggests that he should allow for that likelihood anyway. With pretty much every army having a flyer of some sort it’s reasonable for us as gamers to have a contingency to deal with them should we find the sky filling up with fast movers. Units with skyfire rules or an upgrade or ammo type. A flyer of your own is not unreasonable and if it turns out your opponent hasn’t taken one then you get to dominate the skies. It’s not exactly a lose lose situation other than the often heavy point investment required. Or you make the decision to ignore it and hope for the best. Having witnessed what my piddly Ork flyer can do I don’t necessarily recommend that option. A flyer will rarely win you the game, but it will give your opponent a headache whilst the rest of your army does the business.

But the point is this: Flyers were an important missing piece of the 40k puzzle. I was quite possibly the biggest sceptic (well joint first with Lee) when they first started to appear in 40k. It was a combination of things as to why. Firstly it was how simply flyers worked in Space Marine – that was never going to translate well in the creaking behemoth that is the 40k rule book. Secondly, the rules seemed reminiscent of Epic 40k. Which was such a wallowing turd of a game I was immediately concerned. And finally my feeling was that they would unbalance the game and give Space Marines, Chaos Space Marines and Necrons an insurmountable edge.

Whilst the latter is partially true it re-emphasises the point that 40k is at its best when armies are interesting. Built around combined arms rather than designing a power list to spank the living shit out of your opponent in three turns or less. And then hit on their momma. Solid cores of troops, elite units, assault elements, armour, artillery. All working together to the greatest effect. Add in aircraft and it all suddenly makes sense. It adds an extra layer to the combat, adds a new threat to the previously tame skies. It forces gamers to think in three dimensions beyond vantage points in buildings.

Plus it’s outrageous amounts of fun. Building the kits is awesome. It takes those early days of building Airfix F14 super Tomcats to a whole new (and way cooler) level. And using them is ace. They look great on the board, the rules make for new and interesting tactical decisions for both players. And board set up too has never been more important. Playing hideously open boards that have no place being anywhere other than Warhammer Fantasy or Lord of the Rings will spell doom and misery for any units that fall under the guns of a flyer. But I suppose that could make for interesting scenarios too and allow you to recreate the odd scene from the Gaunt’s Ghosts series. No bad thing there.

In short – flyers have changed the game of 40k far more than I ever realised, and for the better. The potential for aerial shenanigans encourages gamers to write more flexible army lists. Tactics have to be rethought and adapted. The space has never been more three-dimensional and board layout is vital to affording your troops the protection they’ll need. It doesn’t mean flyers are overpowered because they’re not. They’ll still get shot to bits by one another and even without skyfire, it’s not as hard as you’d think to shoot something down, because I’ve done it. Of course there’s a commercial argument. If you have a flyer I have to buy one too. Little bit of yes, little bit of no. No one forces you to do anything and there are alternatives. But I struggle to entertain the financial point of view because chances are we’ve already spent a couple of hundred pounds on our armies already. What’s another thirty? Flyers represent an opportunity to bring some of the excitement, dynamism and scale from the artwork to the board. And that cannot be a bad thing.

One thought on “Fast Movers in 40k”