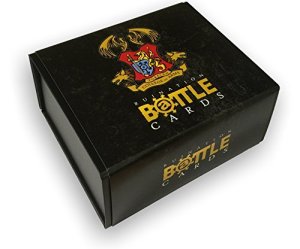 Now I think it’s fairly common knowledge that I’m not a massive fan of collectible card games. There’s 3 reasons for this:

However, whilst at the Bournemouth comic expo I spotted a familiar face. It belonged to the incredibly tall and extremely friendly Samsun Lobe, the man behind the Dying Star trilogy of books that the failed Kickstarter of the same name was based on.

Whilst the team behind the game are hard at work redoing the models and buffing up the rules for another run at Kickstarter (next year I believe) Samsun has been busy developing and putting out a collectible card game based on his second trilogy of books called Ruin.

Now before I get accused of betraying my principles and such this collectible card game uses, wait for it…dice. But more on that later.

The Ruination Battle Cards starter set that I was able to get my mits on comes with two decks, some spells, a game mat/board/sheet/thing and the aforementioned dice. It’s all nicely presented with foam inlay to keep everything nice although the cut out for the foam is a little snug which makes getting the cards in and out a slightly stressy experience. I was worried about ruining them. 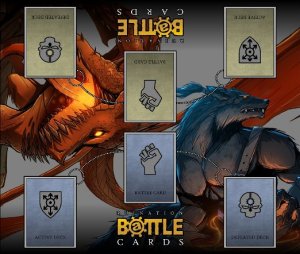 Part of the reason for that is that the cards don’t have rounded edges which makes them prone to foxing and excessive wear. And whilst production value is high the card feels s little thinner than other games – of any type – so a little more care will be needed in terms of keeping them nice. 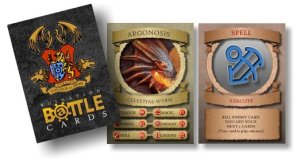 Although it’s care you won’t mind taking because all the cards are beautiful. There’s a lovely blend of conventional artwork and renders but all of it looks fantastic. Granted, there’s no associated fluff with the starter set so until you read the books or go to the website the various characters and spells aren’t going to mean…anything at all. Which is actually a bit of a shame. A leaflet on the world of Ruin would be a welcome addition to the starter set, just to wet your whistle.

To put it in context it’s like having Space Marine models without knowing anything about Space Marines. Yes they’re cool looking models but so what? Although at least with a deck of gaming cards you can at least muddle through a game.

And on to the game itself. As mentioned you get too decks and boosters are available so you have the option of building your deck as you see fit (grumble grumble grumble) however – and this what stops the game from being a duel of dickishness is the a combination of the cards and the dice.

The cards, like the time-honoured game of Top Trumps, has multiple values. Six in point of fact. So (and I think you can see where I’m going with this) in a game of Ruination a dice is rolled per round and that value determines the stat you compare. The weaker card is defeated and the winner stays on and the dice is rolled again. Spells can be used to augment the result but as you only get eight they have to be used sparingly.

The multiple profiles and the dice role means that building a deck is an agonising process as you need a firm strategy weighted by the law of averages both in terms of what cards you take but the order in which you stack your deck. Some cards are the proverbial Top Trump and nigh on unbeatable whereas others are much more of a risk. Which I like. The dice adds in that level of unpredictability that prevents the kind of power gaming that’s always put me off this kind of game.

The incredibly easy mechanic means that you’ll be playing within minutes and each game will be fast paced and actually a lot of fun. And for those gamers who don’t always have much time or want to smite a colleague over a lunch hour, this is ideal.

Ruination Battle Cards is actually a lot of fun. Am I a collectible card game convert? No. Will I play this? Yes. It still needs that last little spit and polish – mainly in the form of some kind of background sheet – to make it perfect but broadly it’s there.

You can purchase Ruination Battle Cards from Samsun Lobe’s website priced at £20.00.