2016 has been an interesting year.

It’s been an interesting year for me personally and, having overcome some pretty huge challenges, it’s actually been a pretty good one all things considered. The fact that I’m putting fingers to keyboard again is indication of how different things are now to a year ago. Let alone 2 years ago.

For the rest of the world the year has racked up an astonishing butcher’s bill. In places like Aleppo and across Afghanistan, Iraq, Paris, Berlin and a host of other places. A string of shootings in the US which has inflamed already fraught race relations in the country. Regardless of the politics all these people mattered and is a tragedy of wasted life and potential.

We’ve also seen a rise in some of the most divisive and damaging politics since the 1930’s, when people on both sides of the Atlantic and both sides of the debate marched to the polls disillusioned, angry and (if we’re really honest with ourselves) ill-informed and mistrustful of the other side. The results have been troubling, potentially catastrophic and will take years to sort out and years more to understand the true ramifications.

And amongst it all, a steady stream of celebrities and geniuses have died. There are those that will gleefully point out how selfish and shallow we are, weeping over famous people we never met but sparing barely a thought for a war-torn city and its traumatised inhabitants.

To those people I say this: we care. We all care. Some care more than others but humanity is blessed with a near limitless reservoir for kindness that we pour out towards our friends, family, charitable causes, the homeless person on the street and towards the seemingly endless stream of victims of violence on the news. The victims of egomaniacal, power-hungry men and women who would rather see nations burn than give an inch. Who confuse compromise with weakness. And would happily blame everyone else for the oligarchical problems they themselves created.

Why should celebrities get all the attention?

It’s simple: from David Bowie to Prince to our very own and beloved princess, Carrie Fisher, they all moved us with their art.

Whether it’s a song that resonated with us or helped us through a break up. Or a movie that defined our childhood and our view of the world: their gifts connected with us in a way that gives us hope despite the wanton destruction both physically and politically that fills the news cycle. It also connects us in a profound and unbreakable way with those who feel the same.

This is why, for me, Carrie Fisher’s passing is all the more poignant.

One of the first movies I sat through as a young child – barely 4 years old – was Star Wars. I didn’t fully understand everything that went on. I thought the Stormtroopers were robots, Darth Vadar scared the living shit out of me and my tiny child mind had no clue at the colossal loss of life resulting from Alderaan and the Death Star being destroyed (bugger off about spoilers, it’s been 40 years!).

But what I did understand was heroism and sacrifice. I may not have had those labels for them but I knew what I was looking at and Luke, Leia, Han & Chewie all fit the bill. That and X-Wings are awesome.

Growing up I was enamoured with Leia not because she was beautiful, although she was, or because of the infamous Gold Bikini – partly because I was just too young when RotJ came out to know what to do with that image – but because she was remarkable.

She was the leader of a rebellion. She was strong, yet compassionate. Fearless yet afraid. Stubborn yet vulnerable. Strong willed but sensitive. She was all these things and more. She was a character as rich and as heroic as Luke or Han which, for the 70’s and early 80’s was really saying something.

Her character, albeit written, defied society. Leia, portrayed by the wonderful Carrie Fisher, dared the chauvinists to tell her to sit down and shut up. Dared educators to do more than just tell generations of young girls to aim for mediocre grades or not to waste their time with science and technology.

Carrie Fisher understood that character and what she represented to girls and women better than anyone.

In the Star Wars universe, women weren’t just politicians, they were soldiers, pilots, leaders and did so on their own merit, not because hubby or daddy had pulled some strings.

Star Wars, as a franchise, has always challenged ideas of race and gender. This is a universe in which humans of both genders and all colours cohabited, fought and died alongside aliens for their freedom. It’s important to note that the Empire heavily persecuted non-humans and the Rebellion was largely made up of humans, fighting against that oppression.

It teaches every generation who watches it how remarkably capable we are and how staggeringly short sighted and pointless nationalism and divisiveness is. Granted the theme of the movie is a violent rebellion but I think we all know the message I mean. And at its heart is a young woman, raised in privilege, who could have stayed home but instead chose to stand.

I’m immensely proud of my daughter. I’m proud of her humour, her sarcasm (at nearly 4 I really have made a rod for my own back), her precociousness, her curiosity, her intelligence, her bravery, her compassion and her emotional sensitivity.

I really want her to see Star Wars (well, the original 3, Episode VII and Rogue One) not just because it’s a brilliant and exciting story but because I want her to see wonderful, capable and powerful women making a difference. Being heroes. Whether it’s stood at a strategy table like Mon Mothma sending soldiers into harms way or with a blaster in their hand like Leia.

Princess Leia matters as a character because there had never been anyone quite like her or will be ever again. Carrie Fisher and Princess Leia, for me were one and the same. For all of her problems in the years following Star Wars, Carrie Fisher never gave up. She strove to do better and to enrich the lives of the people she came in to contact with.

And judging by the outpouring on Social Media within minutes of today’s sad announcement I’d say she achieved that end. Not to mention her effect on the millions of Star Wars fans around the world.

I can’t wait for my daughter to see Star Wars and for me to point to Princess Leia and say: ‘that’s Princess Leia, she leads the Rebellion’. And when my daughter turns to me and asks ‘is she a goody?’ I shall look at her, smile and say ‘yes, my love, she is a goody. Just about the best there ever was.’ 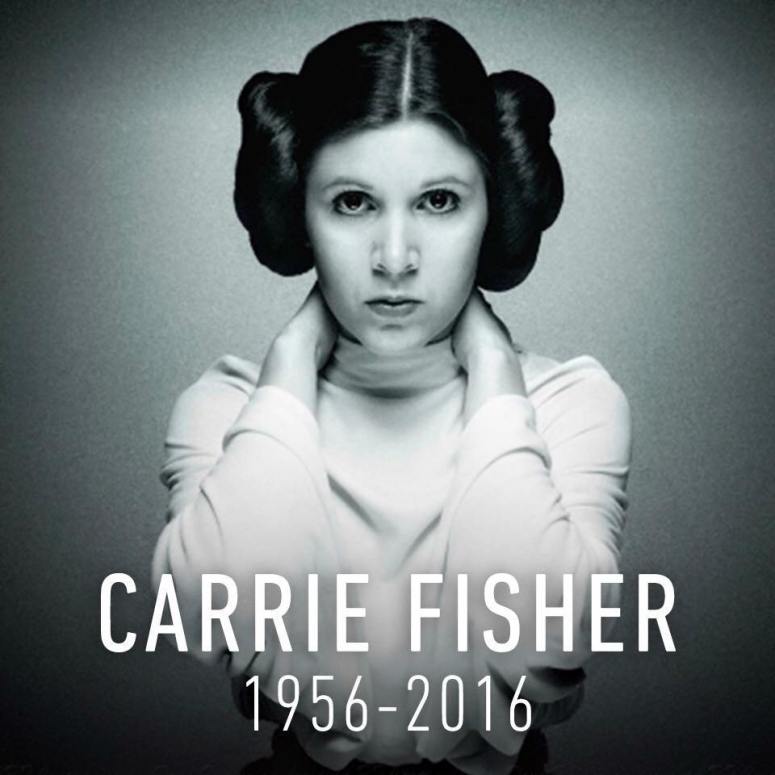 3 thoughts on “Why Princess Leia Matters”