A long time ago – back in 2002 – a TV show came out that prompted an extraordinary response. Combing the best of science fiction and the wild west, Firefly captured the imagination of millions of people around the world. It’s cast had a rarely found chemistry that brought episodes to life like no other show before it. Combined with inspired direction, effects and a compelling future world Firefly seemed to be destined for great things. Until Fox cancelled it after 13 episodes. The response was remarkable. Fans of the show took out a full-page ad begging Fox not to drop the axe but to no avail. Three years later fans prayers were answered when Serenity was released, a movie sequel to the cancelled show. The fact that the movie existed at all was a miracle. Cancelled shows don’t get made into a features yet somehow Firefly had. This was entirely down to the passion of the creator, Joss Whedon – yes the guy who wrote and directed Avengers Assemble – the cast and the fans. Sadly despite topping box offices in the UK, Europe and local markets in the States it wasn’t a commercial success but, to coin the Boss ‘we did the impossible, and that makes us mighty’. 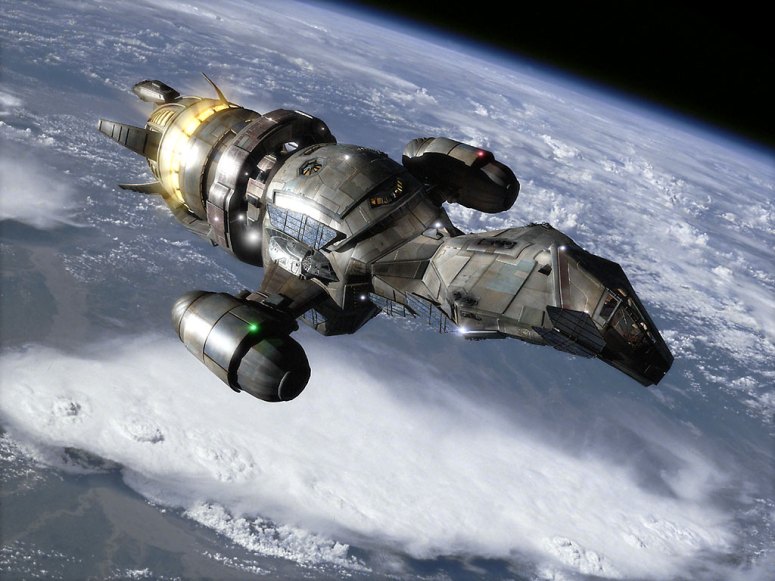 Now, 11 years after the show aired, Gale Force 9 has announced that they will be releasing a game which is testimony to the richness of the universe and the loyalty of its fans – myself included. Although we may never see Serenity and her crew on our screens again, we can at least keep her flying on dining tables around the world. I can live with that.

The below is lifted from the Gale Force 9 website…

“After the Earth was used up, we found a new solar system and hundreds of new Earths were terra formed and colonized. The central planets formed the Alliance and decided all the planets had to join under their rule. There was some disagreement on that point. After the War, many of the Independents who had fought and lost drifted to the edges of the system, far from Alliance control. Out here, people struggled to get by with the most basic technologies; a ship would bring you work, a gun would help you keep it. A captain’s goal was simple: find a crew, find a job, keep flying.”

Firefly, the popular television series created by Joss Whedon, comes to life in a new boardgame from Gale Force Nine and Twentieth Century Fox Consumer Products. Compelling characters, great storytelling and an evocative universe has made Firefly a fan-favorite for the past ten years.  Now fans of the television show and board games can chart their own course with Firefly: The Game, arriving on store shelves Fall 2013.

In Firefly: The Game, players captain their own Firefly-class transport ship, traveling the ‘Verse with a handpicked crew of fighters, mechanics and other travelers.  As a captain desperate for work, players are compelled to take on any job — so long as it pays.  Double-dealing employers, heavy-handed Alliance patrols and marauding Reavers are all in a day’s work for a ship’s captain at the edge of the ‘Verse. Firefly: The Game is a high-end thematic tabletop boardgame from Gale Force Nine (GF9).  It will be the first in a series of tabletop hobby boardgames and miniatures games from GF9 set in the Firefly Universe.“Building on the success of Spartacus: A Game of Blood and Treachery, we’re thrilled to be making a game that evokes the heart and themes of Firefly – the best ‘gorram’ show in the ‘Verse.” said John Kovaleski, CEO of Gale Force Nine, “With challenging game play, fantastic production values and compelling narratives, you and your fellow captains will want to head out into the big black again and again”.

“We’re pleased to be working with Gale Force Nine to bring a new board game to the devoted fans of Firefly.Firefly: The Game is innovative and remains true to the spirit of the popular series” stated Jeffrey Godsick, President of Twentieth Century Fox Consumer Products.

One of the things I wanted to do this year was expand my gaming horizons and review more than just the usual fair so I’m very excited to be reviewing Guards! Guards! A Discworld Boardgame by Back Spindle Games.

Another reason why I’m excited to be reviewing this game in particular is that Guards! Guards! was one of my favourite Discworld novels. I’ve not read many but I have read all the Watch books because I think the Ankh Morpork City Watch are just ace.

But on to the game. For starters, you get a lot of stuff in the box. A small forest of card board in fact and the production value is excellent. Everything in full colour. Everything made from good stock produced to a good finish. 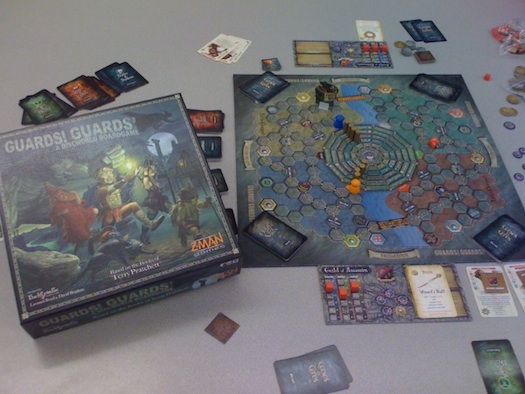 It’s a weighty box and includes a four panel fold out boards, cards, counters, profiles and counters and tokens of various types.

The premise of the game is as typically Discworld as players must go in search of magic spells that have been stolen from the Unseen University, right out from under the Librarians nose. Oook.

Players take on the role of a member of the Watch and must wonder the streets of Ankh Morpork in search of 5 out of the 8 missing spells. Along the way they can, and must, recruit volunteers to help them in their search. Volunteers take the form of various well-loved characters from the books and each confers bonuses or penalties to your performance as you make your way around the board. There’ll be something there for every Discworld fan. Not to mention you have having ally yourself with one of four guilds from the Universe – again, each with their pluses and minuses.

I think the greatest strength to this game is the determination of the writers to keep it feeling Discworld. Aside from the characters you meet along the way and attempt to charm or bribe into your service, the items you can acquire are familiar too, such as Rincewind’s hat. Fate will dictate that Death takes you for a Curry or you can get run over by Luggage. Those new to Discworld won’t get every reference, character, or gag but that’s fine because most of it is funny on its own merits but for fans it’ll be the little touches that really gets their nerd juices flowing.

The mechanic of performing actions is blisteringly simple. To perform an action you much roll a D8, add your required stat – Brawl for example – and if it beats the required target you perform the action. No fuss, no muss.

I’ll be honest, at first pass I found the rules a little confusing. I think this is as much to do with keeping the rules as stream lined and compact as possible rather than being badly written but I did feel like the layout could have been tweaked and it wasn’t always immediately clear how one event tied in with the next. But Guards! Guards! is not like most boardgames so perhaps I’m being too sensible. For one thing you don’t use a die to move which is genius. But no other boardgames requires you to find magic scrolls, sabotage one another’s attempts at victory, summon dragons (yes, there are dragons) and avoid careening self-aware luggage chests. The Dragons are a bit of a pain. They scare everyone indoors which prevents you from recruiting volunteers and unless you want to write off that quadrant of the (utterly beautifully illustrated) board you have to do something about them. It’s not an entirely welcome distraction but I suppose it is very…Discworld.

Where Guards! Guards! really excels is the extremely tactical nature of the game. Volunteers, for a start, can only be recruited from specific locations and even then on one of the 3 types can be found there. Unless you go to the pub. Obviously. Those categories are: Lords & Ladies, Man & Beast and Shades & Shadows.Each comes with a set of skills – not all of them helpful – that augment your performance in some way. Some volunteers are even wanted by the Watch and as loyal defenders of the peace it is your job to dob them in and collect the reward. But volunteers are vital as they’re the poor hapless bastards that have to leg it through the mean streets of the city to deliver the scrolls to the Unseen University, during which they can be set upon by all kinds of unsavoury folk.

The game forces you to plan your moves three or even four turns ahead as you not only need to get to the locations of your spells but prevent your opponents from doing the same by sabotage, magic or steering the Luggage into them. Plus, you know, it’s funny. You also need to be able to get to merchants and temples to accumulate the various paraphernalia you’ll need to kick each other in face as well as thwart the magical challenges set by the Wizards of the Unseen University. Money must be earned to acquire said instruments of face kickery as well as to up your attributes to make said kicking of the face easier. So basically there’s lots of hooning around the city trying to avoid being kicked in the face whilst, in turn kicking others in the face. Discworld Noir this ain’t.

If I’m honest, because there is so much to remember you can find yourself a little confused on your first outing but I think that’s slightly more to do with the rulebook as it could, for me, be slightly more logically laid out. But it’s a relatively minor grumble from what is actually a superb game. Especially if you’re a fan of the Discworld novels.

I’m rarely stuck for things to gripe about but for Guards! Guards! the list is very short. The rulebook could be better and the playing counters could have been little City Watch bods rather than just coloured pieces and I’m not too convinced about the presence of Dragons. They seem to slow the game down rather than raise the stakes. That said the one driving force behind this game was to keep it loyal to the Discworld Universe. It was a complete labour of love and it shows through completely. I imagine the result could have been something very different – and over simplified – had a ‘faceless’ games company produced it so I’m glad Back Spindle Games got the gig.

To quote Guards! Guards!: Thunder rolled. It rolled a six.