Another year another Eldar Codex.

At least it seems that way. Eldar have been a headache for the design team ever since the first Codex that came out for second edition 40k. They’re a fascinating army in terms of background, army composition and game play. Not even the Tau can match the Eldar for how well all the various units work in concert. Granted it’s very much the case of easy to learn, difficult to master but that’s true of armies like Space Marines. No really. No really. Shut up.

I’ve been frustrated with Eldar for a long time because the books are always brilliant until you get to the army organisation and then it all comes unstuck for one reason or another so I wasn’t surprised that another Codex was released so soon after the previous one despite the fact that the previous version was actually pretty strong.

But onto the current version. Which could have been superseded in to the time it took me to read it and write this review for al I know… 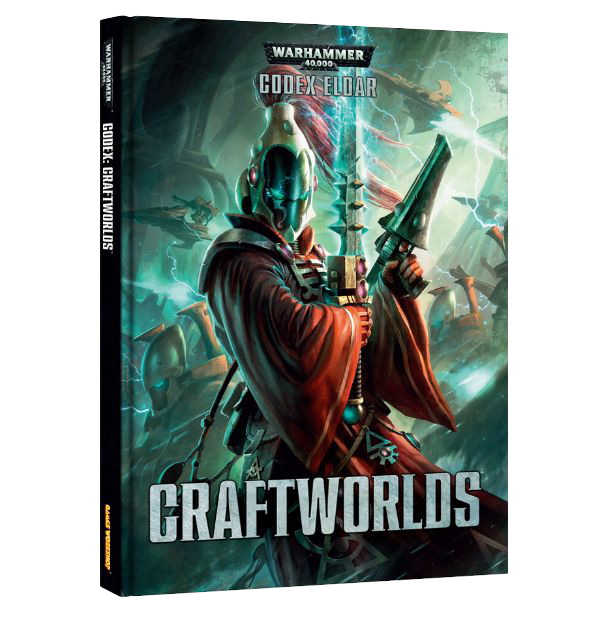 Like the previous version the cover art is splendid. Not quite as dynamic but has veiled menace which I dig. It’s interesting that the Space Marine and Craftworlds codices both have junior officers on the covers rather than cool and groovy leader types. Not that they’re any less cool of course.

The production value has increased just as it did with the latest Codex Space Marines and there is lots of splendid new artwork. Not as much as I expected in light of Codex Space Marines but still plenty to make you boy parts and your girl parts (delete where appropriate) feel all warm and tingly. But like Codex Space Marines the artwork dominates double page spreads making the book incredibly thin in terms of actual content. Throw in 36 pages of photos and hobby section and the 160 page Codex Craftworlds doesn’t feel like…well a book. The artwork is beautiful, especially the newer stuff, but there’s just so much of it.

What content there is, however, is broadly well written. There’s still typos of course, but I’ve all but given up pointing those out because all it’s going to result in is an ulcer. There’s been a very well paced step forward in terms of the background for Codex Craftworlds. As with the previous version, this version seems to understand further still what it means to be an Eldar be it the path of the warrior, the outcast or balloon animal maker. Wait, what?

However some areas have been neglected either through space or the assumption that they won’t hold people’s attention. The biggest victim being the timeline. There’s fewer events and they just don’t feel as tightly written. The nice thing though is, overall, Codex Craftworlds does feel quite well written. I still feel at risk from hyperbolic overdose but nothing to the extent of Codex Space Marines. Although that was just poorly written rather than repetitive. Although it was that too.

There are some parts of the book that do feel rehashed and slightly lack lustre but overall all the Craftworlds have been given a vibrant lick of paint. Even Ulthwe has more going for it now than being stuck at the very edge of the Eye of Terror. Which is nice. I guess, more than anything, there feels like there’s a point to it all. The previous Codex did an awful lot in making the Eldar feel more tangible but this Codex builds on it and makes the Eldar feel like a people. More to the point a people that does actually interact with one another.

Weirdly that was always the thing with the Eldar: you never really got the impression that the various Craftworlds would have much to do with one another seeing as they have pretty different outlooks, ideologies, fighting styles and even agendas. This book does a lot to clarify that and to its very great credit. The Craftworlds feel more like nations now. Similar but yet different. Working towards common goals in very different ways that can cause friction, resentment and mistrust.

There’s also a general easing off the gas on the matter of the species dying out. Yes the race is the cusp but the emphasis is on that fact, not that they’re beyond saving. It’s an important distinction as one of the common grumbles was the point of playing as a species that was already doomed. Although if you really read into the background that can very much be argued for the Imperium. But I digress.

Broadly speaking the background in the Codex is great to read. Maybe it’s just me not remembering it much from the previous book but there seems to have been a lot of work done around the Wraith constructs and how Wraithguard, Wraithlords and Wraithknights fit into the grand scheme. I particularly like how unsavoury, yet necessary the entire situation is and that Spiritseers are treated with the same disgust as necrophiliacs.

The other tweak is that Dark Reapers get skyfire now which was badly needed.

The big deal in this Codex is, as with some of the others, the formations. Which are fucking mad. If it’s not free weapons platforms, it’s special rules or adding +1 to ballistic skill or weapons skill. Fire Dragons and Dark Reapers with a BS of 5 is just horrid. And wraith hosts make me want to vomit in terror. They get to re-roll failed hits against any enemy within 18 inches of the Spiritseer. I mean really?

Of course the cynic in me would argue this entirely to sell all the models. But you know what? Who cares? Eldar range is gorgeous. Even the Eldar Guardians which must be around 17 years old now, are still awesome. And the bottom line is this:

The Eldar army has had significant weaknesses since 3rd Edition. Weaknesses that made the Eldar a real challenge to use. I’d go so far as to say that they’re one of the hardest armies to use. I’m certainly not the best gamer in the world but I’m certainly not the worst and I found them a challenge. I good challenge but I found strategy and tactics were tempered with faith far more than with other armies. And I’ve played with them all.

The formations in Codex Craftworlds give all the various units a buff that dramatically improves their combat effectiveness. It broadly doesn’t tackle their biggest issues – poor toughness and poor armour – but by increasing the odds of hitting or beefing up the fire power it goes some way to mitegating those weaknesses. Because, if you’re doing your job right, there will be fewer things alive to shoot back. The big revelation is this – it’s going to make the Eldar a challenge to play against.

You’re not going to save killer levels of points with the free support weapons and free upgrades but free guns are free guns. But it’s the special rules and stat buffs that you’re after anyway.

Is Codex Craftworlds going to set your world ablaze? Actually it might just. The formations are so good that no self respecting Eldar player should be without…any of them. The minor rule tweaks and points reductions are an added bonus. The flyers and wraith constructs are still sick and be crammed into your armies wherever possible.