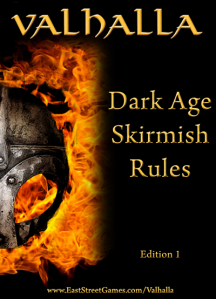 At Salute I saw a lot of wonderful things, but each game system seemed to follow a similar path of a needing a large rulebook costing about £20,  so it’s nice to see a different approach in Valhalla, published by East Street Games. A Viking era skirmish game, harking back to the idea of cheap rule sets, no fixed model range and an emphasis on modifying as required rather than sticking to the letter of the rules.

It also has a unique online component built into the game, whereby you generate your warband, record any experience gained, and can then watch it grow with each victory.

As for the rules themselves, well they’re pretty solid, albeit with a few glaring holes that, at times, may be irritating. The most interesting of them is that you have several lines of health boxes which means, as they are filled in due to injury, a fighter gets progressively worse at fighting to represent having taken a few blows.

Games focus around ‘benches’ – groups of warriors commanded by a powerful leader who sets the morale and tells the warriors what to do. Each turn models have three action points to use which each model must use before moving to another, making turns quick and fast even with a dozen models on the table. In a nice nod to realism, you set your warriors tasks at the beginning of the game such as ‘burn those houses’ or ‘capture those villagers’ which your warriors won’t deviate from unless provoked, so its even possible that games could happen and warriors not encounter a fight at all, or else a crafty defender could pick off an opponent from afar before they have time to react.

Sod the historical realism though I hear you cry- how good is the combat!? Pleasantly brutal I have to say. Evoking the fast and deadly nature of hand to hand combat at the time, heroics by single models will result in a quick death for them as they get surrounded by enemies. So players with lone models caught off guard have to resort to stalling tactics until their friends turn up, or else risk running away. It’s for a good reason that Valhalla insists you start a game together as one bench. Teamwork is the name of the game here.

Now to talk about the online component, it’s pretty easy to set up and generate your own warband. Upload pictures of your models, choose what nationality you would like (Cornish, Saxon, Viking etc), the type of warrior you want, generate your models stats and then choose weaponry and equipment. Each page is dedicated to a single task, so you are never confused about what to do or how to do it and its a pretty quick process, with my two bands of Cornish and Gailic warriors (each 8 models strong) being generated in 30 mins.

Now the online mode is handy, but it also reveals some of the drawbacks of the method. For one, it relies on the East Street Games having the time to update the game as it promises it will. The rulebook itself has no scenarios in it and none on the site as of this time, so it would have been useful to have a few in the rulebook to get peoples imaginations going and tide them over until East Street Games found the time to upload a few more to the website. The reliance on the site for keeping track of each models generation, growth and equipment may irk a few used to doing that with pen and paper after each game. There’s also a few formatting errors in the rulebook that were very obvious and should have been caught by someone before printing happened.

Overall though, Valhalla is worth your time. Its a game that will reward you the more time you put into it if you are willing to meet it half way initially. The solid base of rules and encouragement of modding and changing the game yourself is an attitude I wish more game developers had.

If there’s a Viking era skirmish game worth trying today, try Valhalla. You’ll be pleasantly surprised at both the depth to the rules and at how cheap the game is, probably being £50+ for the two warbands of 12 warriors a side (depending on where you buy them) and a core rules system that should only get better with time.

Not bad for rules that only cost me £5.

My head is still spinning slightly to be honest. This year Salute was everything I’d hoped for in some ways and something of a missed opportunity in others. Anyone who knows me in real life is well aware of my propensity for taking on way too much stuff (still, it works out occasionally, otherwise I wouldn’t be writing this, here and wouldn’t that be a pity…) and yet again I managed to overcommit my time for the day. Worst of all it meant that, for the second year running, I missed out on the #warmongers lunch time meetup. Boo me! Boo I say!

Thing is, I distinctly remember my phone alarm going off at 12:45 and then snoozing it, about 14 times or so… Damn… Then I walked out of the hall at about 2pm, rang Phil to find out where everyone was and it was all over. Not even a trace residue (okay, I just made myself feel ill) of #warmonger was to be seen and I trudged disconsolately back into the hall to BUY ALL OF THE THINGS instead. [Mat would be proud. -Ed.]

That’s part of the problem with being on a stall most of the day I suppose (I have a nefarious alter-ego, beware!), but to tell you the truth I really enjoy that aspect as well. It means I get people coming to talk to me (the poor mad fools!) and I get to ask them all about the hobby they’ve been doing, what they’ve seen at the show and what shiney things they have been tempted into buying. It’s a brilliant thing to be able to get so many different views on the hobby with people covering everything from 6mm historical right through to the usual suspects like Games Workshop and the like. The big difference from last year were lots of folks talking about Malifaux, Warmachine, tonnes and tonnes of X-Wing, and a bit more Bolt Action chatter (I think Phil will have more to say on that front in the not too distant future).

It’s obvious that the hobby is in an amazing state at the moment, with almost too much going on to be able to keep track of it all and it’s generating masses of enthusiasm across the community that without doubt followed me home!

It was my most satisfying Salute haul yet I think. I picked up the three main systems I had planned on, didn’t get massively distracted by anything else and found a couple of little bonuses along the way. Here’s a lovely picture of all of my awesome shiny from the day 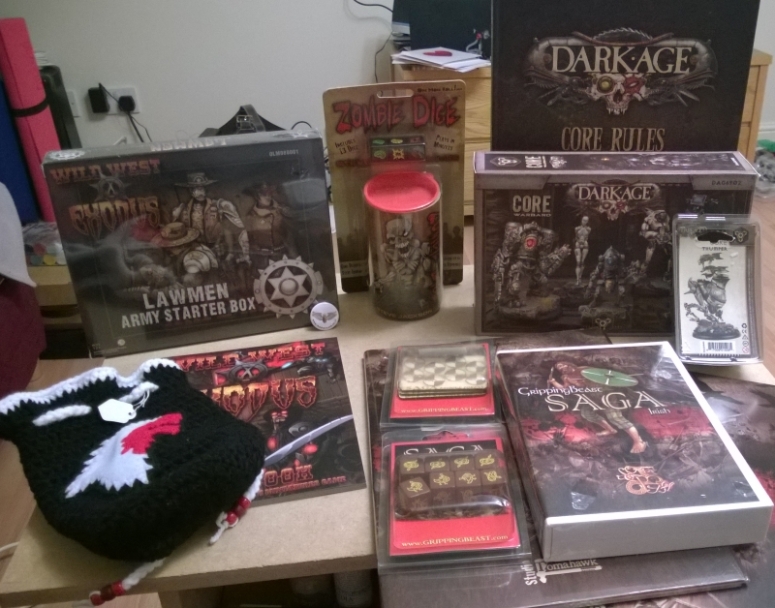 Besides three new skirmish games: Wild West Exodus, Dark Age and Saga, I also picked up Zombie Dice (which I’m looking forward to being a staple family game) and a lovely dice bag from @TheDiceBagLady. All great stuff. I’ve already been cracking on with the assembly of my Wild West Exodus miniatures clocked my first game (see my article going live tomorrow), watch this space for a lot more on that front as the miniatures are gorgeous! I’ve also had a good peruse of my other figures and I’m very pleased with my choices. I’m loving the character of the Irish war band with the wolf hounds (one of my favourite breeds of dog besides my own of course) and the Core models from Dark Age have a nice alt-feel to them despite the obvious superficial comparison with the Convergence models from Warmachine.

I also got the chance to meet all of The Shell Case team for the first time and they’re all quite normal (yes I said ‘quite’) and a great laugh to mooch around a show and generally enthuse about the hobby with. We made some great contacts and are all really excited about what’s happening with the site over the coming months, stick around, it’s going to be ace!