You may remember back in June I reviewed a 3×3 space mat from Deep Cut Studio and I really rather liked it. Being someone who appreciates beautiful things – and with a massive X-Wing fleet – I got back in touch with Deep Cut to see if I could look at their 6×4 foot mats and they kindly obliged. Just as a teaser we’ve played a 400 point X-Wing game over this thing and we’ve got a game with the Tantive IV coming up so watch this space for the prettiest X-Wing battle report this side of Tatooine.

After I reviewed the 3×3 mat I had a couple of The Chaps and people on Twitter ask me if the mat was really that good, especially compared to the better known Gale Force 9’s product. In a word? Yes it is. And its big brother is even more so. To be clear it’s not made of a different material or possessed with an AI that strokes your ego every time you move your X-Wings (although that would be wicked cool), there’s just more of it. There’s more material which means a bigger gaming space and that means bigger games. Because it’s 6×4 rather than 3×3 or even 6×3 it’s Battlefleet Gothic compatible which fills me with such unbridled joy even I can’t find the words.

But more over it is completely and utterly beautiful. Mat and I are both in marketing. We both appreciate a good bit of design and we’re both hyper critical especially on things we’ve deluded ourselves into thinking we could do better. Mat’s exact words, when I unrolled it the other week at games night, were ‘Oh my God! That’s gorgeous.’ And he’s right.

I’ve been in the hobby a long time and in terms of my painting skill I’ve hit my plateau. I’m as good as I’m ever going to be plus or minus a few skill points. Equally I’ve hit the time wall that everyone hits when they do silly things like grow up, get jobs and have children. My personal time is very limited and the time I do have I try to indulge in all the various different facets of my hobby, but the one area that always gets neglected is – I’m sure you’ll all be stunned to learn – painting. And not just my armies: my scenery too. And my boards. These stupendous games mats offer people like me the opportunity to play across breathtaking boards that aren’t normally scene outside of places like Warhammr World or Babylon 5. 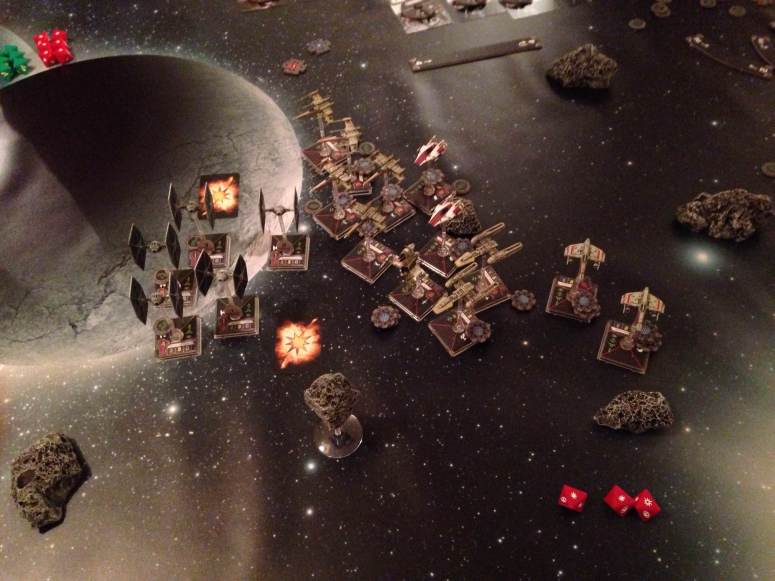 The production value of the design is crazy. The previous mat was like looking at something from Astronomy Picture of the Day which, for all I know, it could have been. Not that I would have cared. But this is an entirely original creation. Time and effort and skill went into designing the mat. Not to mention the faultless printing of it.

It is a bit of a faff to get in and out of the cardboard tube and you either need to reverse roll it or flatten it with a couple of figure cases when you first lay it flat, to prevent curling, but they’re minor, trivial, gripes that in no way detract from the product. And the benefit of playing over a pretty sexy looking space board. And the fact that 6×4 is available breathes life into a game that could grow stale trapped within the confines of a 3×3 gaming space. That’s not to say smaller games of X-Wing aren’t fun or even that the space is tiresome, but it’s just nice to be able to kick things up a notch from time to time and the mat from Deep Cut Studio allows you to do just that.

And the cost for this 6×4 beauty? A trifling £39.90. Now to put that in perspective, I did make a space board a while back and the paint cost me – at those prices – £30. Today that’d be more like £50.  And whilst it looks pretty cool it isn’t anything compared to the mat and doesn’t include the cost of the boards themselves.

The epic 6×4 game mat lives up to that word. It’s a stunning looking mat and the fact that Deep Cut Studio offer other sizes over the standard 3×3 puts them head and shoulders above Gale Force 9. Throw in the fact they look better, they’re made better and are better value makes them the best and first choice for gaming mats.

You can pick up the game mats direct from Deep Cut Studio.

You may remember a little while ago I took a look at the Ice Planet battle mat from Gale Force 9 for use with the X-Wing Miniatures Game. I came across Deep-Cut Studio and their wide range of game mats not just for X-Wing but a wide range of tabletop and RPG systems as well.

I got my hands on the Deep Space mat, again for use with X-Wing with the idea of making a direct comparison against the GF9 product.

The Gale Force 9 mat had converted me to game mats. They’re a great all in one solution for those that lack the time or the skill to create something similar. The best news about the Deep-Cut Studio mats is that they’re available in sizes between 3×3 and 6×4 which is fantastic. This means games of all stripes can get an awesome looking gaming mat for not lots of money.

And awesome is the word. My first impressions were that it’s really very pretty. Whereas the GF9 mat felt photoshopped, albeit still looking pretty cool, the Deep Space mat from Deep-Cut was more like looking at something taken with the Hubble Telescope. It’s incredibly good-looking to the point it’s almost a shame to put models on it. And that makes it completely beautiful. The richness of colour is very impressive. The standard of print is exceptional. Whereas the GF9 mat felt slight over saturated with ink, Deep-Cut’s feels like a press quality item. Which is what you want for something you’re paying cashy money for.

It’s thinner than the GF9 mat which means it rolls out easier but takes a fair bit longer for the ends to settle flat but it’s not a massive deal. Just give yourself a few extra minutes when you unroll it. And because the PVC seems to take the ink better there’s no signs of wear or rubbing which was my big peeve. The thinness does make rolling it back up a bit of a faff because it lacks the rigidity to tapped into a tidy roll but again, it’s not a big deal but extra care is needed.

But going back to the look of the mat, it’s just a joy to play across. The models look fantastic and thanks to the sizes available it means Gothic players get to enjoy gorgeous playing spaces as well. And this makes me extremely happy. It doesn’t mean I’m going to spontaneously start painting my Gothic fleet but it’s nice to know the grey plastic will have a good-looking backdrop.

Come on! Look at it! It’s just epic. And it makes anything you put on there look epic. And considering what I put on there are Star Wars ships which are, by definition, epic; there’s a shit tonne of epicness in that photo.

The battle mat from Deep-Cut Studio is an excellent product. It looks fantastic, it’s produced to a high standard and the 3×3″ mat I got is cheaper than the GF9 version and I know which I prefer. I’m really keen to see what some of the other mats look like, particularly other space mats and ones that could be used for Bolt Action.

The mats are available direct from Deep-Cut Studio priced £22.90.