Jason of Warsculptor/Noobhammer has put up another sculpting tutorial. This time it’s all about hair and bears so if you like your models beardy and or hairy then this is the tutorial for you…

And you may even notice a familiar badge on the intro…

Whilst enjoying a hobby day with Lee, Jeremy & Neil of The Chaps last weekend I realised that my 5th Company was incomplete. It was lacking a representative of the Machine Cult of Mars and someone that can not only repair what little armour the battle company has, but also bolster defences.

I refer, of course, to the Techmarine. The standard Techmarine, I think, is often overlooked as an Elite choice in a Space Marine army. The Thunderfire Cannon gets no shortage of attention. The Techmarine itself is little more than a Space Marine with artificer armour. However the ability to repair vehicles and improve a units invulnerable save in a specific building is actually rather handy. Plus he gets a free power fist attack. And all for 34 points more than a standard bloke. Granted that’s a little more than two standard Marines worth of points but you’re paying for the skills.

Those skills get considerably better as you invest, however. Servitors improve your chances of success on your damage repair rolls by +1 each, providing they still have their servo-claw. And let’s say you’ve bought the box, so you have two if them. Throw in the servo harness and you’re suddenly repairing vehicle damage on a 2+!

Add two (over priced) heavy weapons and you’ve got a, strategically speaking, very valuable unit. Although I think Servitors should be able to move and fire, especially as they’re a point cheaper than a Space Marine, after the first one and they’re nowhere close to as good.

But on to the hobby side if things…

So I got me a Techmarine and decided that I’d put up something about how I built the servo-harness because, to be honest, it’s a bastard not only to build but to keep in one piece. 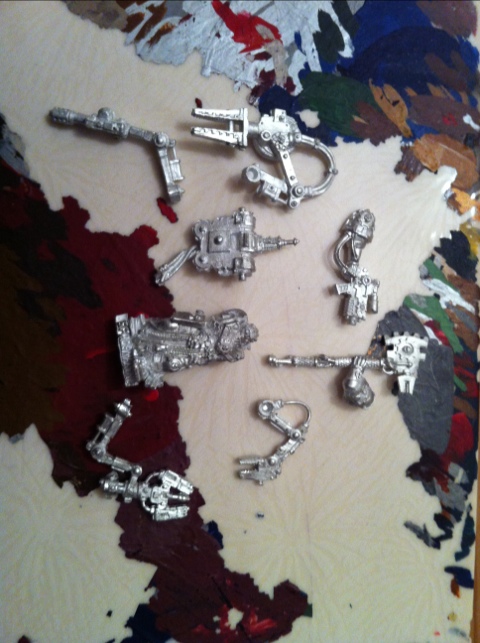 First thing’s first, get everything trimmed and ready to go. The metal Techmarine is lousy with flash.

I ordered the Mail Order only version with no helmet. Should you do the same, a word to the wise; the bolter arm doesn’t fit so don’t waste your time.

Basically, what I decided to do was to drill all the way through each of the harness arms and the lower part of the back pack. That way the arms would be as strong as possible, with the maximum amount of brass rod running through them as possible. 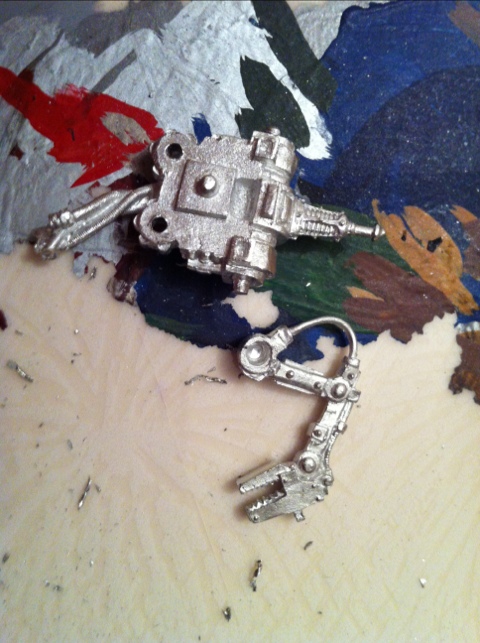 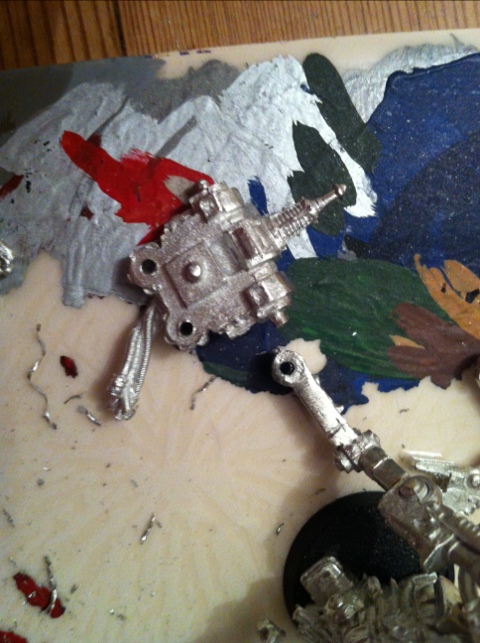 The tricky part isn’t the clipping or the drilling but making sure that you have the right size drill bit to go with the rod. The easiest way round this is to pick up pinning kits from the likes of Gale Force 9. They do packs that contain two sizes of rod with matching drill bits so you know that the rod will fit perfectly.

The result is a pin job that fits well that’ll give you genuine rigidity to your model rather than having another piece of metal covered in glue. 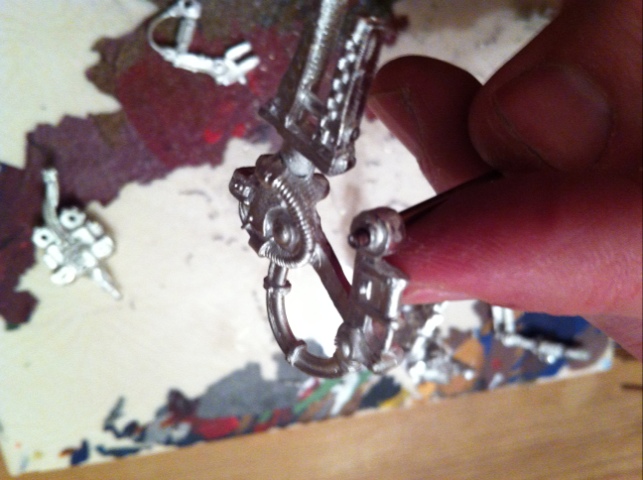 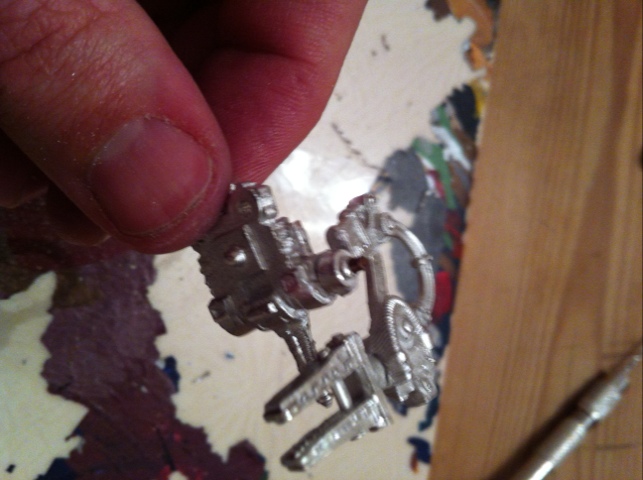 Now I pinned the two servo-arms first which was a mistake. Because the arms are so bendy trying to work the flamer and plasma cutter in place was a real pain. 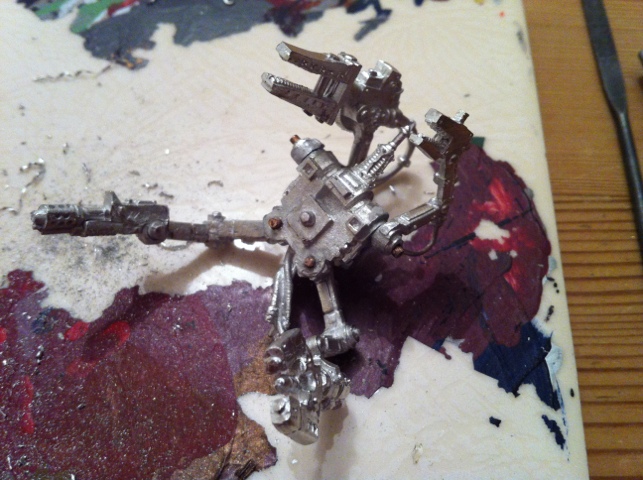 But as you can see, the result is a fully pinned and strong servo harness. And the bonus result is that if you cut ten rod slightly too long you can replace the ‘nubbin’ detailing that you would have drilled through or clipped off. So the model still looks the part despite the work done. 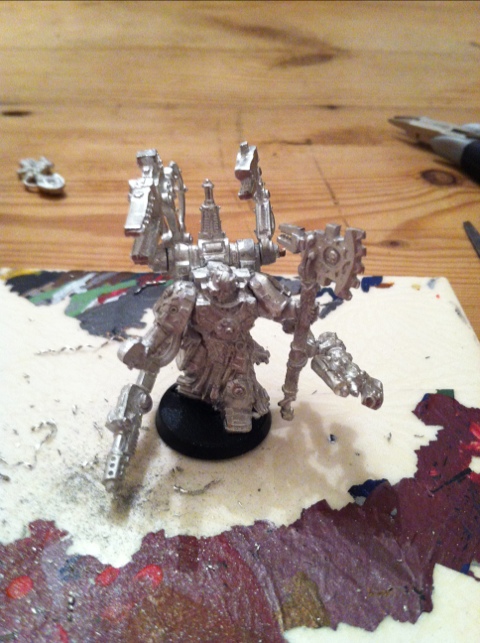 Anyway, hopefully this was at least of interest, if not useful. If anyone would like a specific top tip post written then please drop me a line.

Continuing my tutorial theme, Hugo over at Ichiban Painting has posted a couple of damage and weathering tutorials on YouTube, so I thought I’d share them with you.