It’s been a wee while since I looked at a video game and as I was given Tomb Raider by my lovely wife for my birthday earlier in the month I figured it would be a good opportunity. 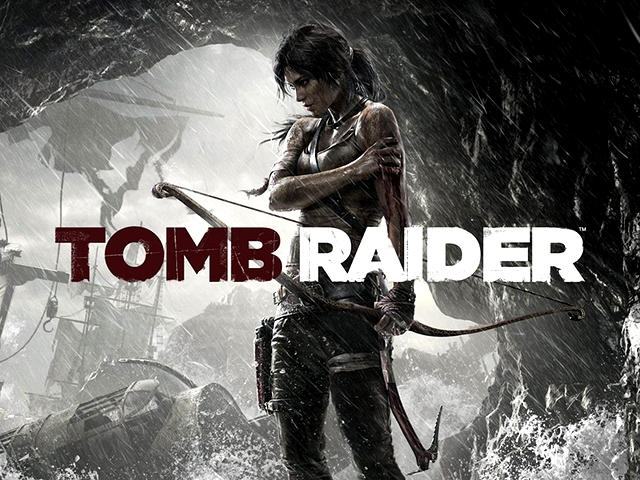 Back in the distant 20th Century in the year 1996 a game came out that changed video gaming as we knew it. Not only was graphically and environmentally ground breaking but it put the character at the heart of the story, not just the action. Of course it helped that she also had enormous, pointy, boobs.

I loved the Tomb Raider games growing up. I enjoyed the puzzles – as frustrating as they often were – and the action could be genuinely hairy. Sadly, like so many franchises of its day, it became the victim of its own success and soon Lara Croft was surrounded by bastard children each uglier than the last. I hung in there with the series until the Angel of Darkness that looked so bad I resigned myself to the notion that Tomb Raider would become nothing more than a cash camel for the publishers until sales dropped enough that they could close the studio and move the developers on to something else.

I played Anniversary for nostalgia’s sake in 2007/2008. And it was fine but all it was was a veneer over old levels. I know the clue was in the name but it pushed ‘homage’ to its absolute limits. I even bought Underworld. But didn’t get past the first level, the novelty of ‘realistic environmental impact’ – she got dirty basically – wearing off incredibly quickly along with the overly fussy targeting system.

And there things would have ended had not some bright spark decided to jump on the reboot band wagon and hit the reset button. At first I met the news with indifference, then mild disdain when I heard the story was going to be an origins piece. I rolled my eyes and I may have uttered an obscenity or two – not like me at all – and moaned about how video game developers were getting as bad as studios for resetting a clock rather than just drawing a line under the shite and moving stories along.

Then I saw visuals. The grim, gritty and visceral realism appealed to me hugely. Because I’m mental presumably. The focus was the story, which is where it should be but driven by a beautiful looking graphics engine and impressive game play. At least, that’s how it seemed. 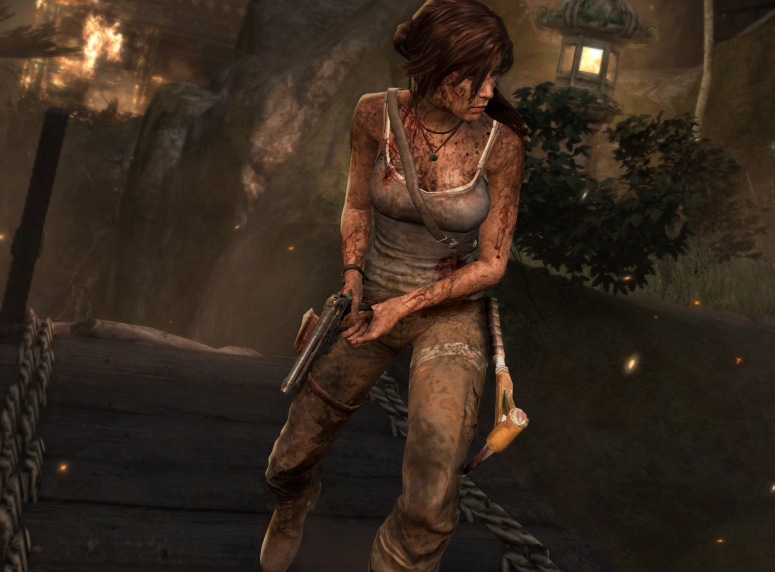 And you know what? It kinda delivered.

So the premise isn’t a complicated one. A young Lara – she’s 18 so it’s okay to still stare at her tits – is on a merry quest to prove herself to her long lost/dead (delete as appropriate). It all goes tits up when the ship – typically called the Endurance – hits a storm and gets ship wrecked. And, obviously, much mentalness ensues surrounding a sun goddess with natives and weather patterns that would be right at home in Lost. And seeing as there’s ship and plane wrecks from just about every era in history you’d be forgiven, on occasion, for getting the two confused.

It’s not a complaint per se, it just highlights the devil is in the details, and some of the details aren’t very original. But then again Tomb Raider is basically Indiana Jones with boobs so what the hell.

Although the previous incarnations never worried about mentally scarring its audience with crypts, animal slaying and being dismembered by dinosaurs, the new Tomb Raider gets so grim and dark it comes dangerously close to getting a cease and desist letter from the Games Workshop. At times the physical and mental abuse that Lara experiences is tough to watch at times, realised as it is with some truly stunning cut sequences. I swear at one point she’s drenched head to foot in human blood. This shit ain’t for kids. 14 year old me probably would have had nightmares. Some of the death scenes even for my jaded and cynical eyes are a tad too much to bare too with, depending on which quick time event you fuck up, sees Lara getting her face impaled on a metal spike or bodily impaled on a tree branch with all the properties of a metal spike.

Sadly the quick time events are back. I’ve never been a fan of quick time events because it’s just a way of punishing you for wanting to sit back and watch the action. Anniversary handled quick time events quite well giving you reasonably time to respond. Tomb Raider 2013 is rather brutalwith the speed it expects you to press buttons. Needless to say the story isn’t flexible enough that a bodged quick time event could lead to the same end point but along a more unpleasant path, instead it usually results in a grim and unpleasant death.

Equally some sections feel very formulaic to the point you’d mistake them for a series of Steven Segal movies. But instead of his buddy getting shot in the arm or the bag guy punching the car window where Segal’s face use to be it goes something like this: action sequence, exploration sequence, action sequence, wander about like a twat, break something plummet down a slope or fast flowing water whilst avoiding inplausibly positioned barriers and other unpleasant obstacles. It wouldn’t be so bad weren’t those ‘sliding’ sequences so intensely unforgiving and take a couple of stabs to complete. And seeing as they’re an inconvenience and purely a mechanism to move Lara a significant distance without making the player grind their way through pointless set changes, you’d think they would make them a little easier to navigate.

Not that the game is hard to navigate. Long gone is the aimless wandering around environments. Instead everything is conveniently laid out on a map so you can find relics, note books – which give you a very cool insight into the shenanigans that have gone on prior to Lara’s arrival – with relative ease. In fact, because the controls are so intuitive, including instinct sight which highlights key objects and terrain features in yellow for a moment or two, a lot of the challenge has gone from the game. It’s not entirely bad. Lara will no longer allow you to walk her off a cliff edge. She will also crouch for you rather than having to hold a sodding button. Because of this fluid movement she finally feels like a person rather than a statue that weebles around just to face a different direction. But the important thing is that it feels like a Tomb Raider game. Puzzles still need to be solved, ledges climbed and rock faces to be scaled.

The challenge comes from the beautifully realised environment which can turn on you at the drop of a hat, and bad guys which range from shooty mental to run at you with bloody great machetes mental. And the AI is good too. On normal they will attempt to suppress and out flank you whilst all the while attempting to burn you out of your cove with Molotov cocktails and explosives. They keep you under pressure so God knows what hard is like. And your cover breaks apart too. The game does give you plenty of objects to help you blow up or set fire to your assailants though so it’s not all bad but even with that Brucey bonus I still felt hard pressed at times to deal with enemies.

The combat is the slickest it’s ever been although some times the camera does struggle to keep up. The weapons feel balanced and their existence justified, but there are times when the game tries to push you into playing a particular way and when you don’t enemies are defeated with surprising ease. The key is usually long range manging of faces.

Where it gets a bit daft is the endless foraging for scrap that allows you to turn, for example, a World War 2 Japanese Type 100 SMG into an AK-47 and a simple recurve bow into a compound bow. I don’t claim to understand the mechanics of firearms but I did use to do archery and that’s a staggering amount of bullshit. However, it’s a reasonably clever way of improving weapons to compete with the ever increasing stakes. And to be fair a lot of the upgrades are extremely cool, it’s just nonsense that a person with no formal training in such ‘bush engineering’ (fnar fnar) could turn a pistol into a commando pistol. There’s also a range of natty skills that you can develop along the way including some brutal finishing moves which look fantastic.

Tomb Raider, despite its slightly formulaic campaign progression, irritating quick times and nonsensical equipment development, is a superb game. The story is nicely paced, the stakes getting amped up with Lara being pushed further and further, gradually becoming the wall climbing, gun toting adventurer we all were captivated by 17 years ago. And this time her boobs won’t impale you if you get too close. The difficulty curve is pretty much perfect too, with shit getting real…um…er at a rate that won’t make you throw down the controller in frustration. Tomb Raider is just fun. Huge piles of it. It doesn’t get bogged down with the weight of expectation, it just massively entertains. It’s a worthy start to a new saga and I’m looking forward to what happens next.