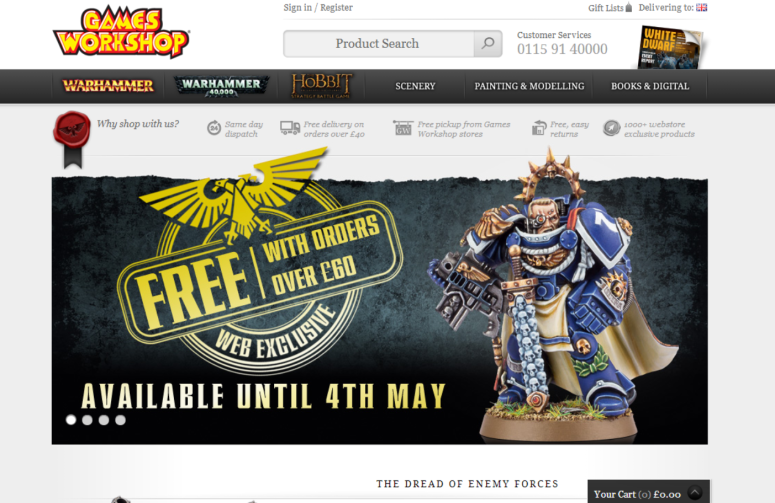 One of the immediate hot topics of conversation (OK hobby rage) after the launch of the new Games Workshop web site was the notable absence of the FaQs section. Any attempt to access them via saved links was met with a pretty clear message:

Well it would appear that all is not lost. People are reporting receiving a common response to their enquiries to Games Workshop customer services about the missing FaQs which looks like this:

Thanks for the email regarding the FAQs on the new website.Currently the FaQ’s are not available on the website, as the design team are taking this opportunity to fully update all the FAQ and Errata articles. This is only temporary and these FAQ’s will be made available again in the very near future.

So, really it’s a case of “good news everyone!” as it would appear that not only are the FaQs not dead, they aren’t even just sleeping, they are getting a full refresh! Hopefully that’ll see some of the more glaring issues with some of the newer codices and army books dealt with (Lizardmen, I’m looking at you with your skink characters on terradons not being able to join units) and a nice fresh set of random rules (undead crumbling randomness, you know what you did) for us all to pore over.

This little lot was on Bell of Lost Souls.

Hullpoints: The previous rumors are true. Vehicles move to the new hullpoints system that will eventually kill them after receiving a number of critical chart rolls. Look for 3+ Hullpoints on most vehicles.

Allies are IN: As had been suspected, a new army chart will report the level of cooperation various armies can have. This will not allow cherrypicking of valuable units from another codex, but instead the ability to integrate a second FOC chart into you army from the selected ally. How deep you can develop this second tree (beyond the mandatory HQ and 2 troops) is determined by what level of cooperation the armies have on the chart.

Fortifications: The truth exceeds the mission based rumors. Look to find a new “Fortification Slot” on the FOC that all armies can access and use in standard army construction. Surprise, surprise, the common choices available happen to have existin Games Workshop kits already available.

Close Combat Weapon AP Values: This is true, and look for a full chart listing all the common CC Weapons in the game and where they land from AP1 all the way down to AP-

Hull points is an interesting idea and it’s good to see close combat weapons get a steroid shot. Although I can’t help but think that both these changes will benefit the forces of the Imperium more than most. But I guess we won’t have long to wait to find out…