In the last few days we have received a few messages from concerned entrants with regards to the voting on our site. We have been investigating this and can now substantiate that unfortunately there has been an indeterminate amount of manipulation/cheating happening. We at The Shell Case are extremely disappointed and saddened with this realisation.

We cannot prove that any particular entrants were actually involved in this, so all entries still stand, but the public vote has been closed and will be discounted. The voting will now fall to The Shell Case team and we will be looking to make a unanimous decision and the winners will be announced tomorrow.

I do find it sad that some people found it necessary to manipulate the vote in a community such as ours, and hope they feel ashamed of themselves for ruining what was our first – and now our last – public vote painting competition.

Those expecting entries for our Big Damn Painting Competition to appear on the site and our Facebook page are going to have to wait a little longer. We’ve already had some cracking entries come through but we’ve also had a few people say that they didn’t have enough time to finish their entries for the given deadline, or they were asking if they could submit them a day or two late.

Whilst allowing late submissions isn’t fair on those that got them in on time, we want as many people to be in a with a chance of winning as possible. So, with that in mind, we’ve decided to extend the submission deadline by a week.

All the information and rules for the painting competition remain the same other than the amended closing and voting dates below and can be found here.

So the new closing date is the 14th April at midday UK time. Voting will open on the 15th here and on our Facebook page and will remain open until the 22nd after which point a winner and the two runners-up will be announced.

We hope this allows those worried they’d miss out to finish their entries and get the pictures over to us.

For all the information on how to get your hands on our fantastic prize of one of The Army Painter’s Mega Paint Sets follow this link, The Big Damn Painting Competition. Or click on the tab above.

If you want to know a bit more about the fine paint products from The Army Painter you can catch a review here.

So all that leaves me to say is good luck and have fun.

Those fine chaps over at Pins of War are doing a truly awesome Chaos Space Marine painting competition.

Some of you may remember that back in April the Shell Case Shorts 4 was all about the origins of a army/regiment/Space Marine chapter etc.

It was a very popular edition of the Shell Case Shorts to the point that I’d thought about running another later on. So that’s kind of what I’ve done…

However, this time round it is a straight up ‘create a Space Marine chapter’ competition. But instead of a signed book, my comrade in arms, Hugo, over at Ichiban Painting Studio is going to paint up a Space Marine captain model in the winning chapter colours and I shall have the background illuminated all pretty and both sent to the winner. I’ll also include the winning entry in the Shell Case Shorts anthology that’ll be out in January. I know, I know, we’re awesome.

Each entry should include:

Entries should include an image depicting colour scheme. I recommend you use the Space Marine painted on Bolter & Chainsword.

You can also include an icon/chapter markings is you wish.

Rules are as follows:

Your work is your own but intellectual property rests squarely with the companies in question and is only used under fair use. I reserve the right to publish any submissions in a strictly non-profit capacity. All published writers will be credited accordingly.

Submissions should attempt to evoke a sense of history and grandeur about their chosen chapter/legion/warband etc.

Space Marine colour schemes and chapter markings should be attached to the email as JPEGs only.

All entries must be received by Thursday 5th July 2012 after which a single winner will be chosen. Submissions received after this will not be considered.

Work believed to be plagiarised will be disqualified.

All submissions must be sent as a Word document and jpegs attached to an email to phil@theshellcase.com

[Any spam from entrants will result in disqualification]

Submissions must include at the top of the first page; the entrants name, a contact email address, Twitter name if applicable and name of the Chapter.

1 winner will be chosen and notified by email.

The winning entry will be published initially on The Shell Case blog and later in a free to download anthology.

No discussion will be entered into, my decision is final.

The prize may not be exchanged for its cash value or an alternative. However, I reserve the right to substitute the prize if necessary.

Good luck and have fun! 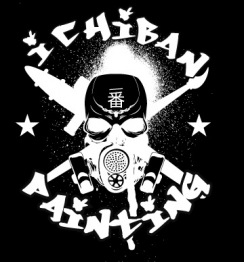 Blimey, did I have my work cut out for me with the painting competition! I thought judging people’s writing was hard but nothing compares to scrutinising a painted model via a photograph. So apologies for taking so long to make a decision (work is also partly to blame) but we have a winner.

Congratulations to Erin Freeman aka @SixEleven for his cracking Skaven Warlock Engineer model by Games Workshop.

At first I didn’t pay his entry that much attention (no offence Erin) because it was a plastic box game model, but as I sat here torn between two other entries I took another look and realised actually, what a great paint job Erin did on it. The contrasting colours, the subtle low lighting and the excellent texturing on the armour, not to mention the fleshy quality of the skin, particularly the tail, and the beautifully shaded skull all go towards making it a very worthy winner.

Erin will receive a model of his choice up to the value of £15 and is no doubt, as I type, pouring over websites trying to decide what to get.

All the entries were of an excellent standard, and special mentions have to go to Lee Parry (@NationofLee) for his Wood Elf Highborn and Andy Goodacre (@AndyThe3DMan) for his Trollblood Axer. Both were excellent.

I shall do another couple of PoD competitions over the next few months so keep your eyes peeled and, in the mean time, have a good look at the photo below.

Paint a single miniature to the best of your ability

Take a digital picture of it.

Send that picture in a jpeg format to phil@theshellcase.com making sure the subject title of the email says ‘The Pot of Despair’

Please no more than 3 images included in the entry.

Include your name, Twitter name (if applicable) a description of your model and any special details or additions I should be aware of and your location.

The competition will run until the 28th February 2012

One prize winner will be drawn on the 29th February and notified by email.

The winner’s model will be published on The Shell Case once the winner has been notified.

The prize is any model/s of their choice up to the value of GBP15. No substitutions may be made. No cash alternative offered.