A twisted alternative to the Path of The Eldar series, Path of the Renegade provides enough insight into Dark Eldar society to avoid it being left in it’s cousin’s shadow. I love Gav Thorpe’s ‘Path‘ series and not just because he’s a fellow writer on the site, focusing on the Craftworld Eldar, it provided the closest view of how they thought and functioned – albeit tough going at times. 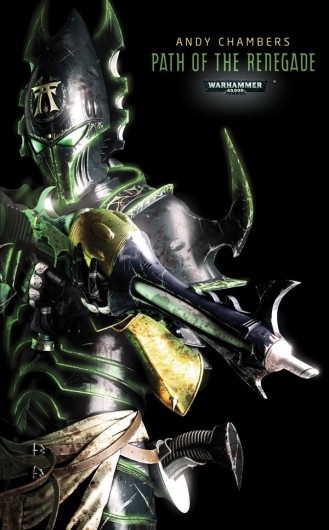 Path of the Renegade, in contrast, is a far more accessible and entertaining (if shallower) blast through the home of the Dark Eldar. Still, it manages to provide enough thoughts and insights into the Dark Kin to make it more than fast food in book form. The book stars a number of characters* all of whom are cruel, selfish, manipulative and vain – which makes them perfect for a book set in Commorragh! The main plot of the book takes it’s starting point from the Codex, namely to become ruler of Commorragh, Aserbul Vect had to topple a lot of Noble Eldar families, many of which still remain plotting their revenge. The head of one such noble family and orchestrator of one such scheme is Yllithian, who has survived as long as he has by scrupulously hunting down and killing any relative that may potentially be a threat to his position. Path of the Renegade follows his perspective for most of the book, as he manipulates, bullies and coerces others into helping him with his plan, to unite the houses of old under the leadership of a legendary leader. The only challenge is avoiding Vect becoming suspicious…

Andy Chambers weaves the multiple narratives and perspectives together well throughout the book, each chapter building the tension slowly. Parts of the book seem to be constructed to bring to mind the Italian Canto, which is perfect considering POTR’s melodrama and range of characters who act out the extreme ends of the emotional spectrum. You can certainly see he had a lot of fun writing such characters, whose actions are so despicable but over the top it becomes rather funny. Yet Chambers’ pulls off a delicate balancing act, weaving titbits of Dark Eldar life and society into the proceedings, which help explain just how a society of sociopaths functions so efficiently without consuming itself within a matter of decades. It’s touches like this which raise the standard of the book and banish the old internet meme of the Dark Eldar being ‘Hell Raiser knockoffs’. I have heard that the book is the first of a planned trilogy like its Eldar Path cousin and there was clearly some thought put into this, with events being set up that won’t pay off until at least the next installment, including a cliffhanger so good I screamed out loud in frustration, so annoyed I was at where Chambers had left the plot. That the book affected me that much though shows how, despite initial impressions, Chambers’ own Path series has sunk its claws into . Just as well the next book is written, or I may have started petitioning Black Library to hurry up and launch it!

What this means is; the book comes highly recommended from me. If you’re a fan of the Eldar at all, upgrade that to ‘buy it now’.

Path of the Renegade is available from the Black Library in e-book and physical formats.

*I hesitate to call the characters of the book protagonists, because that would imply they have redeeming qualities.