A couple of weeks ago I had the very great pleasure of reviewing Firefly The Game. I thoroughly enjoyed the offering from Gale Force 9 with very little in the way of criticism. It is both a must have for fans but a superb board game for those completely naive or indifferent to the Firefly ‘Verse. A case in point, the play test involved myself, Mat and Neil (of The Chaps) who are all die-hard Firefly fans, and Lee who’s never seen the show. And whilst Lee didn’t get every reference, sidebar or in-joke he still thoroughly enjoyed the game.

So when the expansion deck – Breakin’ Atmo’ – was released I got the same group of people together and sat them down for another trip out into the Black. 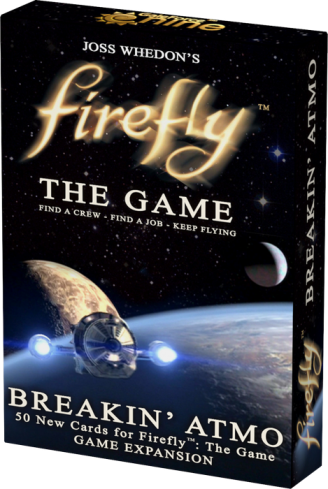 Whilst this may not seem like much or that important it actually makes quite a bit of difference. For a start, the Harken missions are actually worth doing. A lot of the other missions are staggeringly hard though but the reward is well worth the risk. Basically the mission in Breakin’ Atmo’ go a long way to shaving off game play time, providing you’ve got the crew to pull it off. There’s also no shortage of illegal jobs. In that most of them are illegal. Which adds another layer to the game. Namely warrants getting issued left right and centre forcing players out of alliance space. On the raggedy edge. As it were.

To off set the ball crushingly hard missions and the equally harsh consequences when you inevitably fuck them up are various upgrades, items and crew. It’s a healthy mix with the odd gem thrown in although it may not be abundantly clear at the time. Mainly because they’re all crazy expensive and it’s easy to get dazzled by that. But if you can get your hands on Two-Fry and the all new card of his rifle you not only get +2 shooty men bonuses (shut up, I can’t remember the name the symbol is called) and the rifle allows you to re-roll any shooty men test results that come up a one. That’s a huge advantage. It’ll cost you mind, and considering how quickly you can churn through crew some games you may think twice but it’s a tasty combination.

Pretty much all the new characters are worth taking to a greater or lesser extent and just about all of them will be instantly recognisable to fans of the show. And I suppose that’s the point: Breakin’ Atmo’ is a nice to have. It is by no means a must have or even a need to have. But it is good fun. and adding cards to the decks is no bad thing, especially when the game is heating up.

I kinda feel like, considering it just a deck of cards, they should have just been included in the main box as there’s nothing that changes the game up, just broadens the horizons a tad.

All that said, if you’re a fan you will buy it because the option of taking Elder Gommen or getting your hands on a Cortex Uplink is too tempting to pass up. And for the money you’d be silly not to.

A rare teaser trailer for a Warhammer product! Be still my beating heart. Although it lives up to its name by not really showing anything.

My worry is that it’ll be a supplement for the already twatty minded gamers to be even twattier. But the thought of 3, 4 or 5 way games appeals and will mean games nights with The Chaps will get a lot more fun.

That’s right folks, the Games Workshop will be releasing a supplement for Warhammer entitled Triumph & Treachery. At £50 for a 96 page books plus some cardboard it’s a tad on the pricey side but it does allow you to play a game of Warhammer with 3 or more people which is cool.

There’s also a huge emphasis of dodgy and underhand tactics with a deck of cards all geared towards being a bit of a bastard. Whilst I’m not thrilled about the latter the former sounds great. 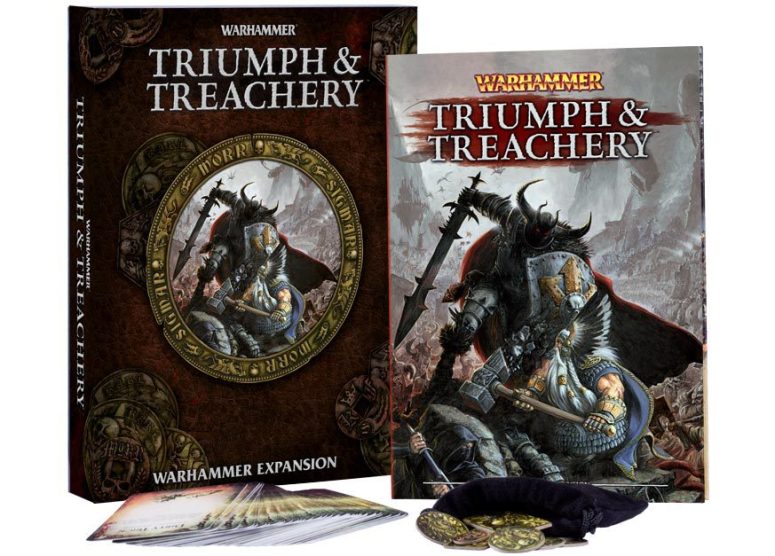 If I’m honest, it feels like one of those Spartan Games supplements that just over complicates the rules and costs as much as the main rules themselves. Although in this case it’s more expensive. For a book a fraction of the size. But we shall have to wait and see. Keep your eyes peeled her for a review.

Another day, another review. And this time I look at the Firestorm Armada supplement, Marauders of the Rift.

There are two things that stand out most on first impressions. 1. The cover is reminiscent of the earlier days of Forge World when they discovered photshop and 2. no one in the wargaming business, it seems, knows how to proof read.

But putting poor spelling and grammar aside, the book is nicely presented and is consistent in styling with the current rule set. It’s also reasonably well written by Spartan’s usual up and down standards. The introductory background to the Rift (within which the Marauders live) is coherent and paints a detailed picture of the part of space, its inhabitants and where events fit in against the backdrop of the main game.

Interestingly they’ve opted to have fluff take us to the start of the Dindrenzi War rather than during, like the main rule book. It’s not a bad thing as such its just a bit of a rough fit especially as the mkII ship variants of the main fleets were in response to the war, but you can take them as looted vessels for corsair fleets. But the fact that the option is there at all is immensely cool.

The book focuses on seven new sub fleets and campaign rules. Yes, ladies and germs, campaign rules. Finally. At long bastard last. Some campaign rules and scenarios which, with some tweaks, you can use using the core fleets. But the important thing to note that players now have a choice of game beyond lining up fleets and sailing them in to one another’s guns. This is extremely welcome news and worth the price of the book all on its nose. And the scenarios themselves are pretty damn good too.

The fleet sections, again, are tidy representations of each faction and their interests in the Rift without getting too bogged down. Although there are a few clumsy paragraphs in there which does rather spoil the flow but it’s not the end of the world. But to rub salt in the wound I do have to say that it’s a little frustrating, when considering the aforementioned proofing problems, when the models in the photography are not only averagely painted, but they’ve also used a miscast as the focus of a shot. Not awesome.

What is awesome is the fleet lists themselves. They’re all pretty well-balanced without too many MARs muddying the waters or slowing play down. In fact they’re actually extremely characterful and go a long way to giving what are quite limited fleets some serious punch. I’m especially impressed with the OmniDyne from both a rules and hobby perspective.

The nice thing is that there’s actually a point in taking the fleets in their own right rather them making them additions to the core fleets. In truth, the main protagonists of MotR – the Syndicate and OmniDyne – are nasty. As in proper nasty. As in could be a real headache for a core fleet. Especially if they were complacent which it would be easy to do.

That’s not to say that the other fleets are without teeth. The Corsairs are distinctly average but they’re cheap and they can take looted vessels from other fleets which gives them not only extra muscle but makes them very unpredictable. It’s also a great opportunity for those gamers that like models from different factions but not enough to do a specific fleet. Now gamers can buy what they want and shoehorn it in around the core of Corsairs. And I think the result could be really quite striking. It’s immensely cool that, if you’re feeling cheeky, you can field a floating supermax prison and it’s attending fleet. 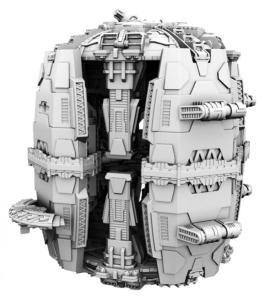 I guess the point of Marauders of the Rift, and what makes it so good and worth the money is that it breathes life into Firestorm Armada’s slightly fuddled background. Granted it’s not specifically set in the Storm Zone but the scenarios just means that your games will instantly become more interesting, more enjoyable, and hopefully more violent. Which is nice.

And for this reason alone it’s absolutely worth the punt.

Marauders of the Rift is available from Firestorm Games priced £9.00.