Okay okay, I know I said I didn’t have any interest in getting this game but I’m weak and…well who gives a shit whatever other reason I have?

The Horus Heresy: Betrayal at Calth (for those living under a rock or too idle to go to the Games Workshop website) is a boxed game depicting the running battle between the Ultramarine and the Word Bearers Legions in the catacombs below the radiation ravaged surface of…well, Calth. Obviously.

If you’ve been keeping up with the Horus Heresy novels then you’ll be fairly aware of the events leading up to it and the major players. If you haven’t please run full pelt into a wall as punishment. Then go read them.

So Betrayal at Calth is a very splendid looking board game pitting the Ultramarines against the Word Bearers in the dingy tunnels and chambers of subterranean Calth. I do have to address the elephant in the room. Yes it’s kind of like Advanced Space Crusade…and Space Crusade. But in a lot of crucial ways it’s not. It’s easy to make direct comparisons between this and its forefathers but the truth is Space Crusade’s focus was exploration whereas Betrayal at Calth is open war and a fight for survival. It’s tunnel fighting at its very worst. The need for blip counters and a lot of the other very cool things that made Space Crusade iconic just don’t fit.

Truth be told, Betrayal at Calth is a pretty good game. Much like Deadzone, the game uses a grid movement system with an occupation limit. However, unlike Deadzone it isn’t shit. The main differences are the hex system works instead of the vague and wooly cube system in Deadzone…and it doesn’t have all the other reasons that made Deadzone poor.

Broadly, the mechanic in Betrayal at Calth works much like its forebears. You roll some very groovy dice with icons denoting a hit or critical hit or a shield (which is either a miss or a defensive success). Unlike Space Crusade it’s far simpler with a straight forward activation system that allows turns to be rattled through very quickly. Much like the reboot of Space Hulk. Unlike Space Crusade it doesn’t bother with the two tier dice system so you’ll actually bother firing your boltguns in this game.

The aforementioned hex system allows for not only slick movement, shooting and combat but very elegantly represents the cramped environs of the tunnels the Ultramarines and the Word Bearers were fighting through. This is a very good thing. Best of all it’s a simple value equals dice rolled process with additional dice being rolled in certain circumstances. Which makes for a far quicker gaming experience. Of course it gets a little abstract but, to be honest, it doesn’t matter because it works.

It allows you to hamper the movement of your opponent or outright bottle neck areas by using the accumulative bulk of your Space Marines or, better yet, your Terminators. It’s a surprisingly tactical game for what otherwise would be a ‘go here and shoot them’ offering.

The production value is also amazing. The cards are thick and premium, the book almost as luxurious as one of Forge World’s Horus Heresy publications and is resplendent with their artwork. The double sided tiles are also loving rendered. The only negative is that they’re not quite as premium as the Space Hulk tiles. But considering the amount of plastic you get in Betrayal at Calth I’m willing to let it slide.

At first I thought a game of Space Marines vs Space Marines would be deeply deeply dull but the differences in the forces – big scary dreadnought vs badass terminators – and the legion specific decks players can call upon actually really works. Plus the critical hit system actually has the stench of genius about it. Rather than the obvious bonus hits, the effects vary from stripping away activation points to reducing enemy characteristics to zero…which means they get pulped basically. And the exploding assault cannon is back! Huzzah!

The scenarios are…actually a bit like Deadzone’s. They’re paced to gradually introduce gamers to the different unit types which rather highlights one of the reasons I suspect Games Workshop put the game out. To introduce new gamers to the 30/40k Universe. Considering the revival of Specialist Games it makes complete sense.

Betrayal at Calth has a simple mechanic, it’s quick and it doesn’t bombard you with the lore like the main rulebook does. Plus the models are superb.

Honestly, they’re all awesome. The terminators and contemptor suffer slightly from being plastics in a starter set compared to their awesome Forge World counterparts, but broadly Betrayal at Calth is absolutely worth getting just for the models. What really sells it is that the Space Marines aren’t the usual push together at but genuine multi-part models as detailed as the plastic tactical squad. They don’t have Forge World’s fidelity of detail to be sure but they don’t have warping, miscast detail or fucking horrid mould lines either.

Regular readers will know that I’ve got two companies of Ultramarines already and, because all the models are non-Legion specific, this box could put me well on my way to a 30% of third. If I felt so inclined. I’ve had to promise Lee that I wouldn’t use them as Ultramarines…at least not all of them. It’s a fantastic starter army though: force commander, chaplain, dreadnought, terminators and 3 tactical squads. I think it roughly works out you get the characters and a tactical squad for free based on rule retail price which is an absolute winner.

However where it does fall down is it lacks the progression of Space Crusade…which is absurd considering it’s 25 years old and, in that regard, the stronger offering. One of the criticisms I’ve heard is that the tiles used in Betrayal at Calth overall make up a smaller gaming space than Space Crusade. Whilst that’s true, they are double sided and the mechanic makes use of that space very effectively so larger tiles aren’t needed. Plus Space Crusade took forever to play so I’m not sorry that Betrayal at Calth is a quicker game.

Between the simple rules, straight forward mechanic, interesting critical hit system and some truly gorgeous models, Betrayal at Calth is a rare solid hit from Games Workshop. It isn’t cheap but we’re use to that. Plus buying 30 tactical marines alone would cost over £60 so in terms of getting some very cool models for not tonnes of money it actually makes complete sense.

The models really are worth every penny. They look fantastic, they’re cast perfectly and would look amazing either as the core of a new army or swapping out some of the older Mk6 and Mk7 armoured plastics. As I mentioned the terminators and the contemptor do suffer from the limitations of their kits, to be more child friendly, but it does nothing to diminish just how cool they all look.

The Horus Heresy: Betrayal at Calth is a brilliant little game. It looks great and plays well. It does lack some longevity but I believe the Games Workshop are remedying that with new scenarios and such. But even if that wasn’t true, you have the beginnings of a seriously cool looking Space Marine army.

The Horus Heresy: Betrayal at Calth is available from Firestorm Games priced £79.99.

The latest Forge World bulletin didn’t have much in the way of news I care about…until I got to this shot. The Gal Vorbak have always interested me intensely when reading the Horus Heresy novels featuring the Bearers of the Word. And, by extension, I’d always hoped they’d do models and hoped further still that they’d do them justice as I’ve never been a fan of the possessed models available for Chaos Space Marines.

Judging by these two gems I think they’re in safe hands. I love how the MKIV armour has been incorporated into the mutations. The reversed jointed lugs are inspired. It all likes like the changes would have been agonising, which they were. I’m finding my eye wandering towards Codex Chaos Space Marines…

I have no idea what this is for, if anything, but it’s a Crimson Fist kicking, what looks like, a Word Bearer shitless.

Awesome model though. The mace is bag on and the armour and base is incredible. 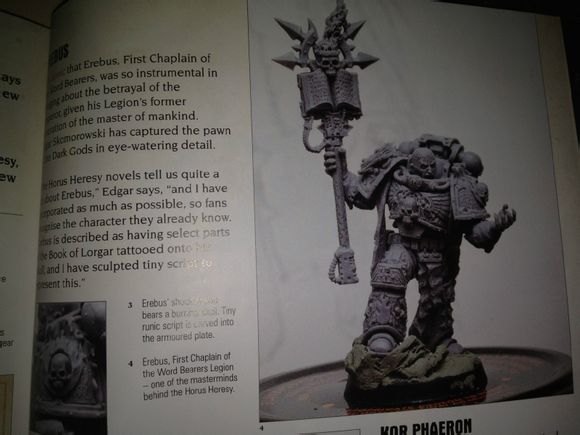 The Mark of Calth is available to pre-order on the Black Library website. And in true GW style there’s a pap trailer to go with it. But the book looks and probably will be awesome so they’re forgiven.